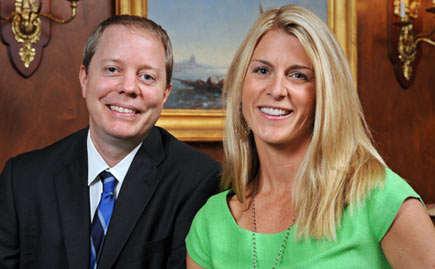 The founder of a nonprofit that helps other nonprofits serving children succeed and an award-winning comedy writer have been honored with Distinguished Young Alumni Awards from the UNC General Alumni Association.

Amanda Taylor Marshall ’97, founder of Fair Chance, and Bryan Hill Tucker ’93, supervising writer for Saturday Night Live, received the awards at a banquet on Oct. 5 for bringing credit to the University through their achievements.

“The remarkable accomplishments of many of Carolina’s younger alumni such as Amanda and Bryan are truly inspiring,” said GAA President Doug Dibbert ’70.

Marshall, who received a degree in economics, worked as a consultant with Ernst & Young in New York and several large nonprofits before moving to Washington, D.C., and starting Fair Chance in 2002. The organization provides free consulting services for one year to fledgling nonprofits, many started by people in poor communities who saw needs to address but lacked the managerial skills to sustain their efforts. Fair Chance advises them how to improve their operations to increase fundraising, effectiveness and reach.

Of the 65 nonprofits with which Fair Chance has worked, more than 90 percent are thriving, having raised more than $2 million in new funding and provided services to more than 55,000 children. Marshall continues to work on development and strategy as a Fair Chance board member and is exploring expanding the business model to high-need neighborhoods in other cities.

While an undergraduate, the Greensboro native received the N.C. Humanitarian Award for founding Operation Smile, raising money to correct severe oral deformities in children from families who otherwise would not be able to afford treatment. In 2005, she was named one of Washington Life Magazine’s Women of Substance and Style, and Greensboro Day School recognized her with its Distinguished Alumni Award.

Tucker, who received a degree in journalism, has worked on Saturday Night Live for seven years. Previously he wrote for Comedy Central’s Chappelle’s Show, Fox’s Mad TV, HBO’s The Chris Rock Show and CBS’s Late Show With David Letterman. A five-time Emmy nominee, he has won three Writers Guild Awards and a Peabody. In May, he received the John L. Haber ’70 Award, bestowed by the New York Carolina Club, UNC’s drama department, Carolina Performing Arts and the GAA to alumni making significant contributions to the arts in the New York area.

As a senior at UNC, the Richmond, Va., native was crowned “Mr. UNC” his senior year, getting to sit behind the bench of every home men’s basketball game during a season the Tar Heels won a national championship. He worked with Student Television and won a broadcast award in the national Hearst competition for college students. He also formed a comedy troupe, Selected Hilarity, and after graduation performed with the group at comedy clubs for about four years. He still performs stand-up routines and sketches.

He and his wife, Rachael Knott Tucker ’96, who is a product strategist, fund a full journalism scholarship at UNC, and he returns periodically to perform and conduct seminars for students interested in writing for TV.

Since 1989, the GAA’s Distinguished Young Alumni Awards have recognized alumni age 40 or younger whose accomplishments have brought credit to the University.