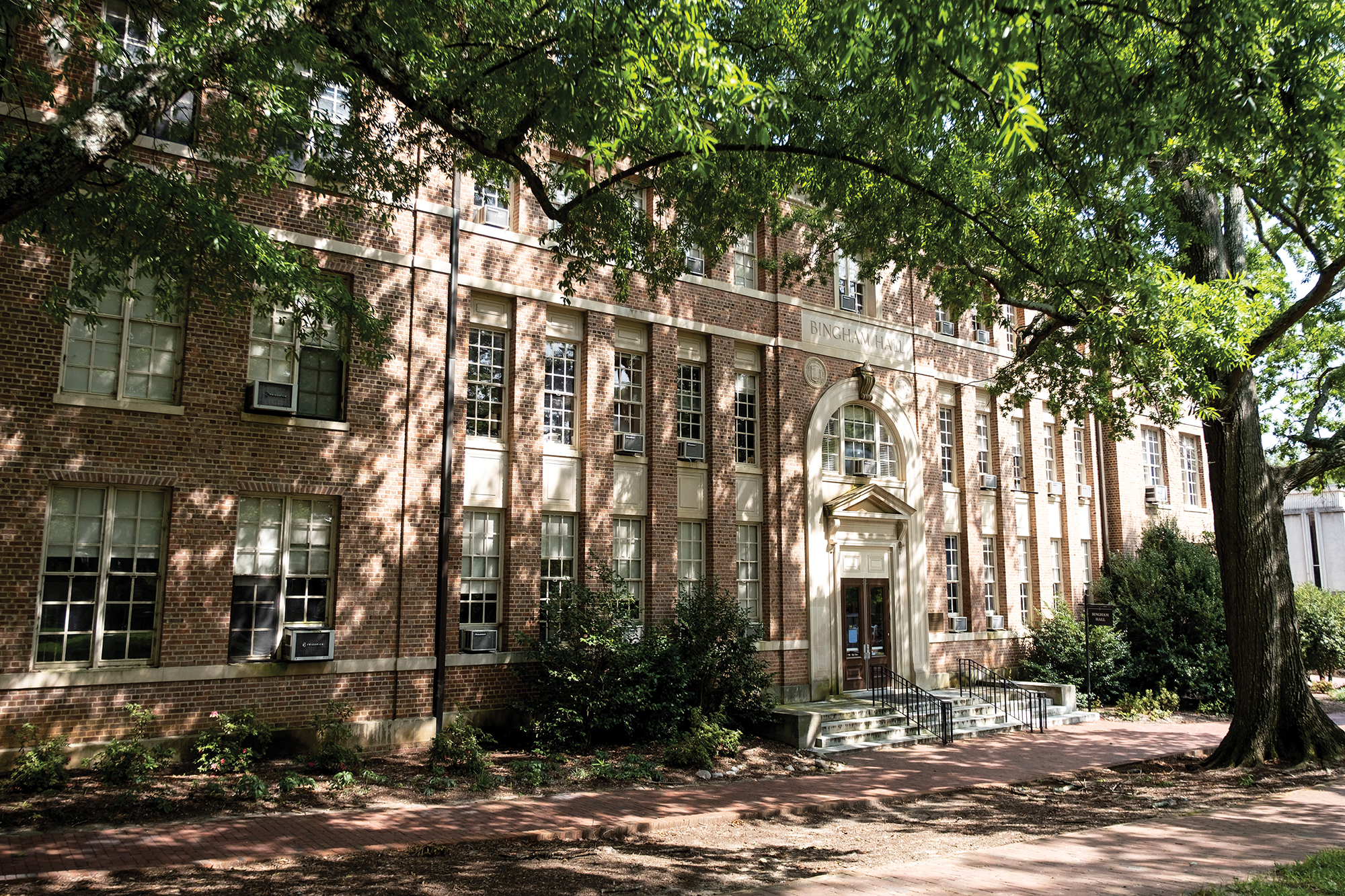 Bingham Hall, a mainstay of Polk Place for 92 years, is closed until UNC can upgrade to adequate ventilation systems, with a $15 million price tag. Its occupants had to relocate. (UNC/Jon Gardiner ’98)

“We’re going to have a building sitting empty on Polk Place.”

Anna Wu repeated herself for emphasis.

Bingham Hall, remembered by English students and more recently those who study communication, has been shuttered since early 2020, and not by the pandemic. It’s moldy from ventilation issues, and faculty already had stopped going to their offices there, had stopped meeting students there.

“We are vacating Bingham altogether. It will stand empty until we have the money to renovate it,” the associate vice chancellor for facilities said.

For the time being, Bingham must share with Swain Hall the title of poster building for the University’s $850 million backlog of deferred maintenance. Swain, ironically, is home to the communication department’s labs and studios; all but one space in Swain is closed.

The department is grateful — excited, even — to have renovated space for labs in the former Walgreens pharmacy on Franklin Street, with the department’s office needs taken on by Bynum Hall.

“This is a success story for us,” said Patricia Parker, the department’s chair. “We pressed this issue with the dean [Terry Rhodes ’78 of the College of Arts and Sciences], who was a wonderful advocate for us.” Rhodes, Parker said, “understands the everydayness of deferred maintenance.”

Wu is quick to point out that UNC is not housing and teaching people in “sick [unsafe] buildings.”

As for Bingham, which is air conditioned with window units, “we’ve had issues with that building for a number of years,” said Abbas Piran ’03 (MBA), engineering director for UNC facilities. “We can’t really maintain a proper humidity.” The problem in another window units building, Gardner, is not severe enough to warrant closing, although classrooms have been closed during the pandemic.

But Parker feels for those who live with that everydayness — substandard HVAC, falling plaster, aged roofs and elevators and fire systems and on and on.

The latest report is now 3 years old and covered 99 structures built with state appropriations. Fifty-five of them were in the report’s “severe” (worst) category, and the numbers to fix them — the highest ever — were staggering then.

“Our research buildings are in great shape,” Wu said. “Our classroom, our academic buildings are in desperate need of investment. Deferred maintenance happens when you’re not fully funded to do ongoing maintenance. You don’t have the staffing or the resources to do really fundamental things. So you have to kind of focus on the compliance and the safety issues. I think the lab buildings do get a lot of attention because they need a lot of attention. But we were not at the point in 2000 where we vacated buildings.”

Short-term, routine maintenance is not suffering, Piran said. “Deferred maintenance” refers to deferred renewal of building systems that have ended their lifespan and the money to replace them isn’t there.

At the end of the 20th century, the public made a huge investment in the campus with passage of a bond issue that was boosted by private gifts. It came as UNC faced mounting deferred maintenance as well as a crying need for more modern lab and classroom space. In the following decade, UNC did comprehensive renovations on more than 30 buildings.

“Our research buildings are in great shape. Our classroom, our academic buildings are in desperate need of investment. Deferred maintenance happens when you’re not fully funded to do ongoing maintenance. You don’t have the staffing or the resources to do really fundamental things.”

“I think what’s a little disheartening is we know between 2000 and 2008 this campus made a tremendous investment and addressed, what, $200 million in our deferred maintenance — at the time, we probably had a $500 million backlog, and we probably addressed half of it,” Wu said. “Look at some of those buildings that we did. We haven’t been able to maintain them at a level that we’d like to have maintained them, so you see discolored plaster on the [Campus] Y. We did a comprehensive renovation to the Y 15 years ago.”

This is a very old problem, and it’s everybody’s. The word “staggering” bears repeating throughout North Carolina’s public universities. “Facility assessments conducted periodically by the State Construction Office have identified $3.42 billion in building deficiencies in appropriated buildings, including some critical life safety and code compliance issues,” the UNC System reports. “Yet repair and renovation funding has varied widely over the system’s recent history, averaging only $32 million per year over the last decade. As a result, buildings in the UNC System are suffering from the many years of deferred maintenance. Left unaddressed, the cost of deferred maintenance escalates rapidly over time and increases the risk of critical system failures, resulting in unexpected disruption of services and costly emergency repairs.”

At Chapel Hill, budget discussions center on three significant financial challenges: a structural deficit, the impact of the pandemic, and deferred maintenance and other facilities needs.

“Here’s the good news — and this is probably where we were in ’98,” Wu said. “Decision-makers are focused on this. The [UNC System] Board of Governors is very focused, our trustees are focused on this, and all the conversations about the budget model talk about this being a critical liability that we need to address. I think for many, many years it was [addressed]; this is a state requirement, the state needs to give us the money. The state’s never going to give us all the money. And I think the difference now is some really thoughtful and creative financing around how we can tackle it in partnership with the state.”

There is optimism, however, as the University waits for funding decisions by the N.C. General Assembly. State revenues for the current fiscal year are projected at 15 percent more than in 2020.

The UNC System Board of Governors in February approved immediate repair, renovation and rehabilitation funds totaling $40.9 million in the 2021–22 biennium for work on Wilson Library and Swain, Phillips and Hamilton halls; and another $20.4 million for a long list of buildings that includes new roofs for parts of Memorial Hall, South Building and Carroll Hall; fire systems in a number of buildings; and what Bingham needs to reopen ($15 million). The list awaits the Legislature’s blessing; only it has the money. Swain is being upgraded already with previously allocated money.

The special attention necessary for the buildings used during the pandemic — and what is learned from a year of working remotely for many — could produce more efficient building use for the future.

“We’ve really focused on addressing filtration, so we’ve done a wholesale upgrade of our HVAC filters and increased the filtration rates to [what’s] recommended, and we have been working with priorities on the classroom buildings getting the ventilation systems working as designed,” Wu said. “And when you can’t meet the requirements, particularly for special classes where mask-wearing is not really realistic, like music and drama, we supplement that with filtering equipment.

“I would say that the pandemic — while it’s, I think, elevated the importance of healthy buildings, it’s also sort of illustrated how we might look at the use of space in the future. Everybody’s working from home … the University has continued to function. So, I think whenever we go and renew a building now, I think we’re going to be thinking really carefully about what you do on campus, what you do off campus and how do our facilities sort of complement people being here either physically or virtually.”