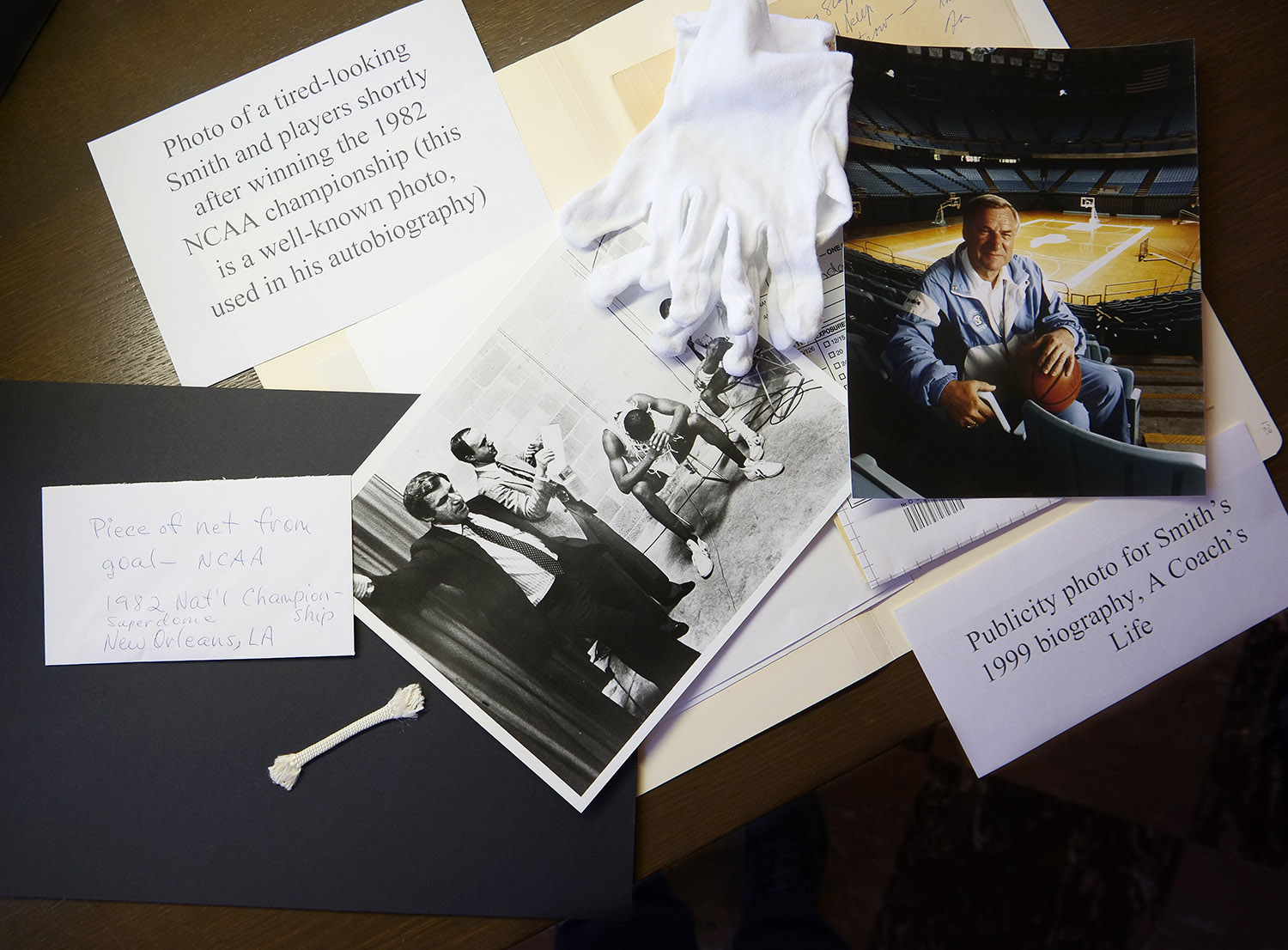 Smith’s family recently donated to Carolina 12,000 items from his early years and his life after basketball. (Photo by Grant Halverson ’93)

A new addition to the University Libraries helps paint a fuller portrait of the man off the court. Smith’s family recently donated to Carolina 12,000 items from Smith’s early years and from his life after basketball — school projects and newspaper clippings from his childhood in Emporia, Kan.; personal letters spanning decades; copies of speeches from his retirement in 1997. They all are now part of the Southern Historical Collection at the Wilson Special Collections Library. The collection, which debuted on Nov. 30, is open to the public.

“It tells us about Dean Smith as a person,” said University Archivist Nicholas Graham ’98 (MSLS). “This kind of fills out the details in his biography and shows more about him as a person and his service after he finished coaching.”

In all, the Southern Historical Collection houses more than 5,000 collections of primary documents, such as diaries, correspondence, photographs, maps and oral histories documenting Southern history.

Bryan Giemza ’99 (JD, ’01 MA, ’04 PhD), director of the Southern Historical Collection, said the addition of Smith’s papers showcases the coach’s impact on the University, college basketball and the South.

“Here is one of the most important public figures ever associated with the University, and, of course, his roots are in Kansas, so it’s really interesting to see how a persona develops and the way that Southerners embraced him as part of the bigger story of Southern basketball,” Giemza said. “It brings more texture to the portrait of the life of one of the most esteemed leaders that the state and University has known in recent years.”

A large portion of the Smith collection comprises newspaper clippings, scrapbooks, letters and other documents that Smith’s parents had saved through the years. These include the cover page from Smith’s school report on Emporia from 1946 (he earned an A), books about basketball, batches of news articles from throughout his coaching career and transcripts of speeches that Smith had sent home for his parents to read. A list compiled by the University in announcing the new collection noted these items are on view:

The collection also showcases how Smith kept up with the basketball world even after he retired through personal letters with fans, coaches and former players. And the collection includes memorabilia showcasing former Carolina player’s NBA careers, including a famous Wheaties box depicting Michael Jordan ’86.

“One of the things this shows is … how much he kept up with people” after he retired, Graham said.

The collection doesn’t shed a new light on Smith’s career but rather, Graham said, further solidifies his reputation of a modest man.

“It shows the respect he had from other coaches and the relationships he had with people,” Graham said. “He really did seem to be as humble and thoughtful as his reputation.”

There’s more at the UNC Libraries’ For the Record blog.

From the Review archives: