Development Head Routh to Step Down

David Routh ’82, vice chancellor for development and the chief architect behind the University’s record...

Ross Presidency Cut Short by Board of Governors 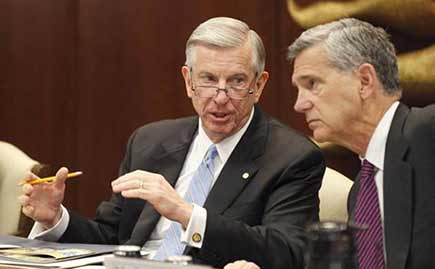 The UNC System Board of Governors voted almost unanimously Friday to truncate the tenure of system President Thomas Ross ’75 (JD). Ross, who just began his fifth year at the helm of the 16-campus system, will depart at the beginning of January 2016.

Ross made it clear he was not ready to retire, and the board’s chair, John Fennebresque ’70, acknowledged that the BOG “had a timeline that we were thinking along and President Ross had a different timeline” for his leaving. But in a contentious question-and-answer session with the media, Fennebresque offered no clues as to why the board shortened Ross’ presidency.

After heaping praise on Ross — “This board believes Tom Ross has been a wonderful president — fantastic work ethic, perfect integrity, worked well with our board” — Fennebresque said Ross was not terminated. (Video of Friday’s news conference is available online on WRAL-TV.)

A statement released by the BOG read: “The Board believes President Ross has served with distinction, that his performance has been exemplary, and that he has devoted his full energy, intellect and passion to fulfilling the duties and responsibilities of his office. This decision has nothing to do with President Ross’s performance or ability to continue in the office. The Board respects President Ross and greatly appreciates his service to the University and to the State of North Carolina.”

The lone board member who voted against the decision to replace Ross, Marty Kotis ’91, told The News and Observer, “I was opposed to it for the process and timing and lack of time for certain board members to review the materials.”

Ross will embark on a year of research leave upon leaving the presidency, after which he has an appointment as a professor of public law and government in UNC’s School of Government.

In the news conference, Fennebresque said that politics was not involved and that Ross’ leadership in handling the UNC athletics/academics fraud case was not a factor.

The closest he came to answering the repeated “why” question was that the BOG wanted to “work with a new leader a year from now that may bring other assets to the job.”

Ross said that Fennebresque had come to see him recently and that “we had conversations over the last few days … we had some healthy conversations.”

Ross presented himself as cordially disagreeing with the board.

“When I came here, I made it clear I wasn’t going to be ready to stop working at age 65, and I’m not ready to stop working at age 65,” said Ross, who is 64. “I don’t know how much longer — but I wasn’t planning on leaving in the near future. The board did have a different timeline, and I respect their right to and their prerogative to select a president.”

When Ross took office in 2011, the UNC System was in the full throes of a financial crisis brought on by the recession and by accompanying state and federal budget cuts. He said at the time that he was determined the money crunch would not be the hallmark of his tenure.

He has appointed nine new chancellors, an unusually high number for four years. An idea floated in Raleigh to close Elizabeth City State — which has experienced dangerously low enrollment — was met with Ross’ insistence that the school’s value to the system and to its community be preserved.

Ross stepped into the high-profile Carolina troubles last year by co-ordering, with Chancellor Carol L. Folt, the investigation led by former special prosecutor Kenneth Wainstein, which resulted in late October with a report about what Ross then called “the Crowder-Nyang’oro scheme.”

That scheme, Ross said on Oct. 22, “marks a horrible chapter in the history of this great University. Today we know the full facts. I’m sad and, quite frankly, angry.”

Deborah Crowder ’75, who managed the office of the former department of African and Afro-American studies, was found to have started and maintained the department’s practice of offering the “paper classes” that are at the heart of the long-running investigation into academics and athletics at the University.

Wainstein and his team of investigators determined that Crowder operated the scheme over about 18 years. In the 12 years between 1999 and 2011, there were 3,933 enrollments in the paper classes, and 47.6 percent were varsity athletes — primarily football and men’s basketball players. Athletes make up less than 5 percent of the student body.

On the day the Wainstein report was released, Ross said: “From the beginning, I think the University has taken the position that these classes started in an academic department by a person employed in the academic side of the University. Subsequent to that, athletics took advantage of that.”

Ross was named in 2010 to lead the UNC System, having been elected unanimously by the BOG to succeed Erskine Bowles ’67. A North Carolina native, he had been president of Davidson College and was a former Superior Court judge and former executive director of the Z. Smith Reynolds Foundation. He has been involved in public service throughout a career that includes a stint as a top aide to an N.C. congressman and as director of the state’s Administrative Office of the Courts.