The 75-Year Journey to a UNC Degree 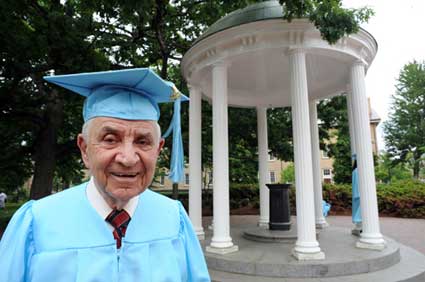 For 92-year-old Roscoe Dillard Griffin of Rougemont, May’s Commencement ceremony was a true cause for celebration. Griffin started work toward his undergraduate degree at UNC in 1934. He completed his last three credit hours this year and became the oldest graduate of the class of 2009.

Though the ceremony was an important day for Griffin, graduation was not always a priority. Just one term paper kept Griffin from completing his degree, a bachelor’s of science in commerce.

Griffin said one factor that kept him from graduating on time was meeting the woman who would become his wife the winter before graduation. Griffin also had a job lined up after graduation – his father started Roscoe Griffin Shoes in 1918 – and working seemed more important, so he didn’t finish the paper.

“Not many graduates had a job to go to in the summer of 1938,” Griffin said. “I was fortunate that I had a job as manager to one of the shoe stores that my father owned. I had hoped to write the term paper that fall and obtain my degree, but with the pressure of a new job and a new girlfriend, it never happened.”

Griffin and his wife, Pat, were married the next year, in June 1939.

Griffin kept the fact that he had not graduated to himself until 2008, when his daughter, Gail Clower, asked him about his diploma. When Clower discovered that her father regretted not graduating, she called the University to see what he would have to do to complete his degree.

In July 2008, Griffin enrolled in cultural geography, a self-directed correspondence course offered through the Friday Center for Continuing Education. There were five assignments and a final exam. He completed the course in February and earned a B. He didn’t tell anyone else about going back to school until he knew he had passed the course.

At Clower’s urging, and once his graduation status was official, Griffin mailed formal graduation announcements in April to friends and family.

“This was the first anyone knew I was graduating,” Griffin said. “I’ve never seen so much excitement. There were calls of congratulations and best wishes.”

Thirty friends and family members helped Griffin celebrate at a party on May 9. Griffin says he has Clower to thank.

“Deep down I had regretted not having received my diploma, but I decided the only person that could do anything about it was me,” Griffin said. “I feel a sense of accomplishment now that it has happened. By my success, I hope someone else will be spurred on to pursue their dream.”