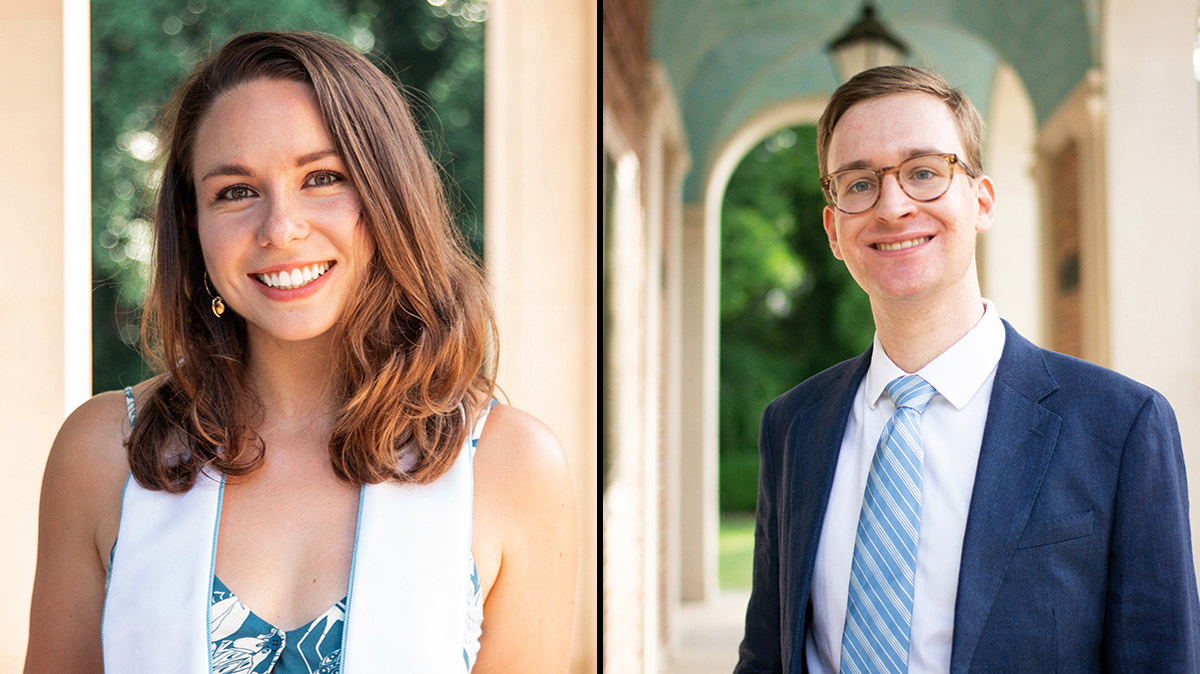 Rhodes Scholars Sarah Mackenzie ’20 and Peter Andringa ’20 are the 15th and 16th Carolina students selected for the prestigious program since 2000. (UNC photo)

Two alumni from the class of 2020, Peter Andringa and Sarah Mackenzie, have won Rhodes Scholarships, the world’s oldest and best-known awards for graduate study, based at the University of Oxford in England.

Andringa earned degrees in journalism and computer science. He was a Robertson Scholar, a Carolina Honors laureate, a member of Phi Beta Kappa, a student representative on Faculty Council and a fellow at the Reese Innovation Lab in UNC’s Hussman School of Journalism and Media. He was among 32 Americans selected for the award Nov. 21.

Mackenzie earned degrees in public policy and global studies; she minored in Arabic. She was a Morehead-Cain Scholar, a Carolina Honors laureate and member of Phi Beta Kappa. She was active in the Campus Y’s Criminal Justice Awareness Action Group and the Community Empowerment Fund. Mackenzie also served as an Honor Court member and teaching assistant in the global studies department. She was one of 11 Canadians selected for the honor on Nov. 23.

As a high school student in Alexandria, Va., Andringa aspired to have a career in big tech. As he got older, Silicon Valley’s shine began to fade, and he became more disillusioned by the industry.

Despite the talents and capabilities of big tech companies, Andringa didn’t see them dealing with the complexities of the real world and making positive use of technology. Through his journalism courses, he said, he saw a new avenue to tap into his computer science skills and use emerging technologies to benefit society.

“It provided a model by which technology was being used to grapple with social problems and consider the human side of it,” he said. “It was never technology for technology’s sake. It was always, ‘How do we use technology to tell a story or make people feel something or help advocate for change?’ I really enjoyed that side of the J-school.”

Andringa combined general journalism courses with design and user experience classes and joined the Reese Innovation Lab, where he worked with associate professor Steven King. He also conducted research to examine how social media is changing the way people interact with the news.

Additional internships with The Wall Street Journal, NBC and The Guardian helped Andringa land a position at The Washington Post, where he has been working as a data visualization engineer on elections coverage and projects that integrate technology into the Post’s reporting.

As a Rhodes Scholar, Andringa plans to take a temporary step back from the industry to examine some of journalism’s most pressing challenges.

“I’m really interested in understanding the mechanics of trust online — how people trust the news, how people build relationships with news brands and journalists online, and how digital products affect how people trust it or how it’s shared,” he said.

The lack of trust in the media and its consequences, he said, have been on full display during the pandemic.

“There’s a very direct link between misinformation and harm in the pandemic. It’s a wake-up call that we need to find ways to encourage trust in the types of media that are going to help communicate effectively with the public.

“The thing that is exciting to me is the space to pursue these types of research questions that I’m interested in and that frequently connect directly back to the things I do at The Post right now. I’m hopeful the access to experts and the access to more time to really dive into some of these topics around trust, design and digital news can transfer directly back into helping news organizations build wider audiences that trust them and ultimately disseminate more fact than disinformation online.”

Andringa plans to pursue a master’s in social science of the internet through Oxford’s Internet Institute, an interdisciplinary center that researches how the internet affects society. He hopes to work across various research fields to find answers to some of the biggest questions facing journalism today.

“It draws on political science. It draws from sociology. It draws from media studies,” he said. “All of these studies need to intersect and work together to be able to grapple with these issues.”

Mackenzie, who grew up in Calgary, Alberta, said: “When I was lucky enough to be offered the [Morehead-Cain] scholarship, I knew it would be an opportunity that I wouldn’t have at any other point in my life — to move to the South, go to a really amazing flagship public school and try something different with a unique program like Morehead-Cain.”

As a Tar Heel, Mackenzie pursued academic disciplines that allowed her to examine and work on issues relating to social justice, poverty alleviation and human rights — advocacy passions developed as a student at the United World College of the Adriatic in Italy.

After taking courses in economics and peace, war and defense at Carolina, Mackenzie landed on public policy as the major to prepare her to take on many of the world’s challenges.

“That felt like I was getting a lot of really important concrete research and analytical skills. At the same time, the work was grounded in real-world policy problems, and those were the things I cared about,” she said.

She also experienced the real-world implications of public policy as a volunteer in the community. For all four years at Carolina, Mackenzie volunteered with the Community Empowerment Fund, a nonprofit in Chapel Hill working to end the racial wealth gap by helping community members transition out of homelessness and poverty. Mackenzie worked with community members to provide support and assisted in case management for fellow student advocates.

Since graduating, Mackenzie has worked as a Thomas W. Ross North Carolina Leadership Fellow in Carolina’s public policy department and is currently a client advocate for the Center for Appellate Litigation in New York. She aspires to become a public defender.

Studying at Oxford, she said, will prepare her to be a better lawyer.

“Going to law school is obtaining a tool to be able to enact change if you want to do that, but you can’t use that tool without understanding the interaction between law and society — in particular law and marginalized people,” she said. “In order to use law effectively, you need to be able to evaluate and understand that.”

As a Rhodes Scholar, she plans to study social policy and interventions but is most looking forward to the community of scholars that she would be joining.

“The reason I’m so drawn to the Rhodes is because it’s a community of people who are dedicated to the same types of questions I’m asking myself and that I’ve encountered over my time at Carolina but approached from different disciplines and different life experiences,” she said. “I think the opportunity to see beyond my own discipline in public policy and have really rich intellectual collaborations with other scholars is really exciting.”