UNC Dedicates Winston House in the Heart of Old London

Carolina is putting down roots in the old country. 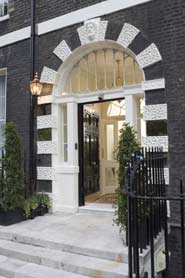 In May, the University dedicated Winston House, an all-purpose compact satellite campus in the “academic heart” of London. Situated in Bloomsbury in Bedford Square, the last intact Georgian square in the city, Winston House will be a classroom site for the Honors London and Oxford study abroad program. It also will act as a hub to connect the University to the international academic community and will be accessible to faculty, students and alumni for academics, meetings and conferences, and as a concierge service for Tar Heel visitors to London.

“I think this is a very important part of the much broader University commitment, particularly to globalizing the undergraduate experience,” said James Leloudis ’77, associate dean for honors in the College of Arts and Sciences, associate professor of history and director of the James M. Johnston Center for Undergraduate Excellence.

The dedication included four academic seminars designed to show what it will be like to be a student in the facility. UNC Provost Bernadette Gray-Little; Madeleine G. Levine, interim dean of the College of Arts and Sciences; and James Horner Winston ’55, the building’s namesake, were among those attending.

Winston, a Jacksonville, Fla., businessman, donated $1 million of the $5 million needed to acquire and renovate the building, all of which was raised through private donations. 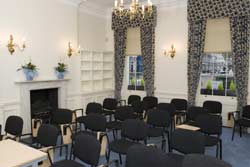 Christopher Armitage, professor of English and adjunct professor of peace, war and defense and the on-site faculty director of the Honors London and Oxford study abroad program, has taught in Winston House the past fall and two summers, before the renovation was complete.

“It is a splendid acquisition by the University,” Armitage said.

An 18th-century townhouse, it is around the corner from the British Museum. “The location is absolutely superb,” Armitage said. It is within walking distance of the University of London and the London School of Economics, as well as Yale University’s and New York University’s European home bases.

The facility is managed by employees in the Honors Program and the Johnston Center. The programs and opportunities the facility offers also will be open to alumni and students across the disciplines and in the professional schools.

High-tech video conference technologies, which will be used to create a virtual campus and connect students at Chapel Hill to students and faculty abroad, already are installed in the building, Leloudis said. “The idea [is] that there’s a benefit not only for students going to London, but also for students who may never go to Winston House, for students back on UNC’s campus.”

Ideas gained from exchanges within the walls of Winston House and through international connections made through the site can be brought back to enrich the state of North Carolina, Leloudis said.

He said there are many private universities with international facilities such as Winston House, but a smaller number of public universities that have undertaken similar projects.