The University has named Jonathan Pruitt, who was chief financial officer for the UNC System, as vice chancellor for finance and operations. Pruitt succeeds Matthew M. Fajack, who has held the position for three and...

The Carolina Alumni Memorial in Memory of Those Lost in Military Service at UNC. (Photo by Keith King ’82)
Posted on Nov. 6, 2015

UNC will hold two ceremonies to honor the military on Veterans Day, Nov. 11.

The first, hosted by the University’s Air Force Reserve Officer Training Corps, will begin at 11:11 a.m. with an outdoor ceremony at the Carolina Alumni Memorial in Memory of Those Lost in Military Service.

Veterans Day, formerly Armistice Day, falls on the anniversary of the armistice signing — on the 11th hour of the 11th day of the 11th month — by the Allies and the Germans in 1918 that ended World War I. 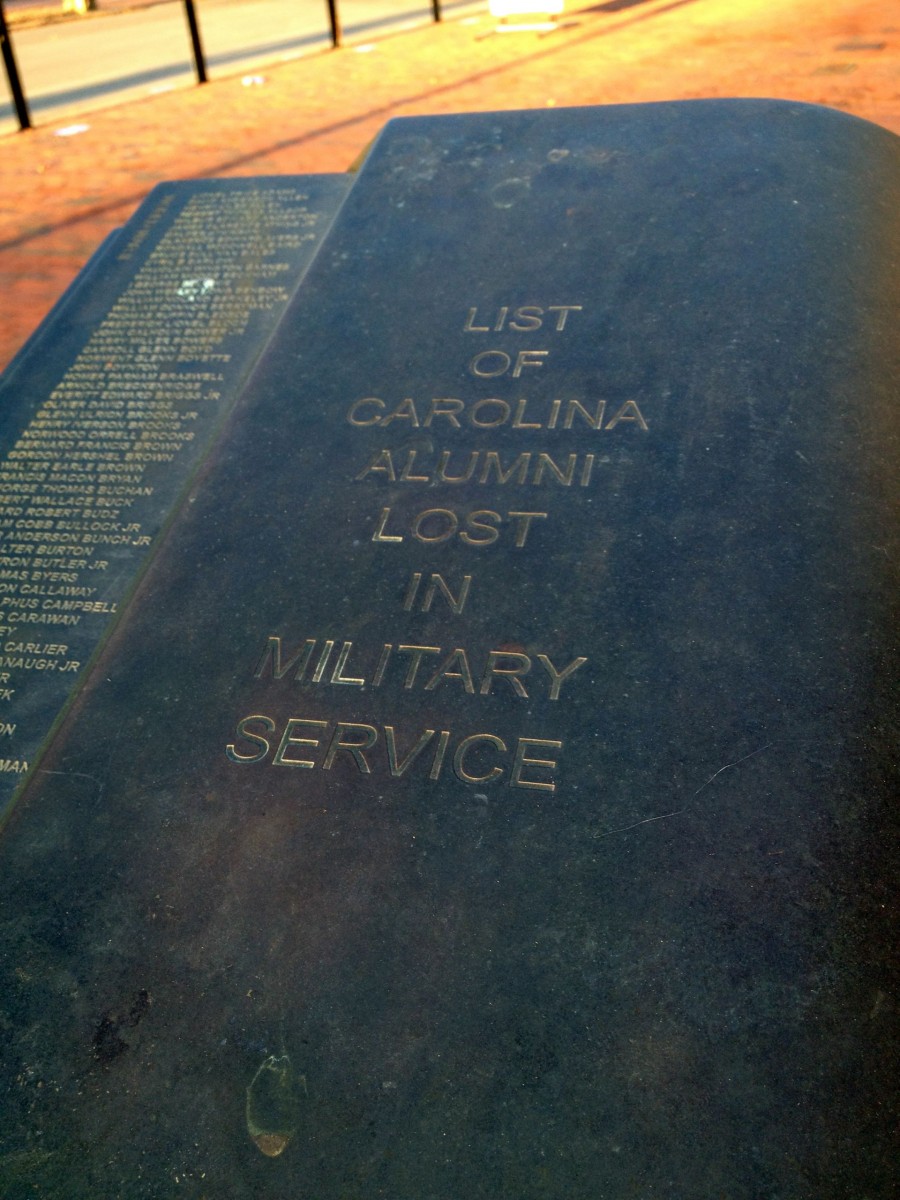 The Carolina Alumni Memorial in Memory of Those Lost in Military Service was dedicated in April 2007. The memorial’s bronze Book of Names includes pull-out panels listing names of alumni who lost their lives in battle. An online edition of this memorial, launched in July 2010, includes a biographical page for each of the 715 alumni listed, along with a tool to search by conflict. This information was researched by the GAA’s Records Department, which began work on this project in 2002, and assembled and edited by members of the Carolina Alumni Review staff. (Photo by Keith King ’82)

The ceremony occurring at the memorial, on Cameron Avenue between Phillips (120 E. Cameron) and Memorial halls, focuses on honoring veterans and military members. The rain site will be at Gerrard Hall, which is on the opposite side of Memorial Hall from the memorial.

Immediately following that ceremony, at 12:15 p.m., the University will host its second annual Tar Heel Tribute program to celebrate faculty, students and staff who have served in the Armed Forces. The program will be in Alumni Hall in The Carolina Club at the George Watts Hill Alumni Center on Stadium Drive.

Chancellor Carol L. Folt will be the keynote speaker at The Tar Heel Tribute, which provides an opportunity to thank veterans in the campus community for their service as well as provide a forum for attendees to learn more about the resources the University provides to assist military-affiliated employees and students.

“Veterans Day is a time to reflect on the sacrifices America’s veterans have made here in the United States and around the world,” said Folt. “Honoring their military service is incredibly important, but here at Carolina, we also must do everything we can to help our veterans succeed as they move forward with their education and careers. The Tar Heel Tribute program brings us all together to help build the connections that can matter most.”

Some of the military and veteran resources at Carolina include: