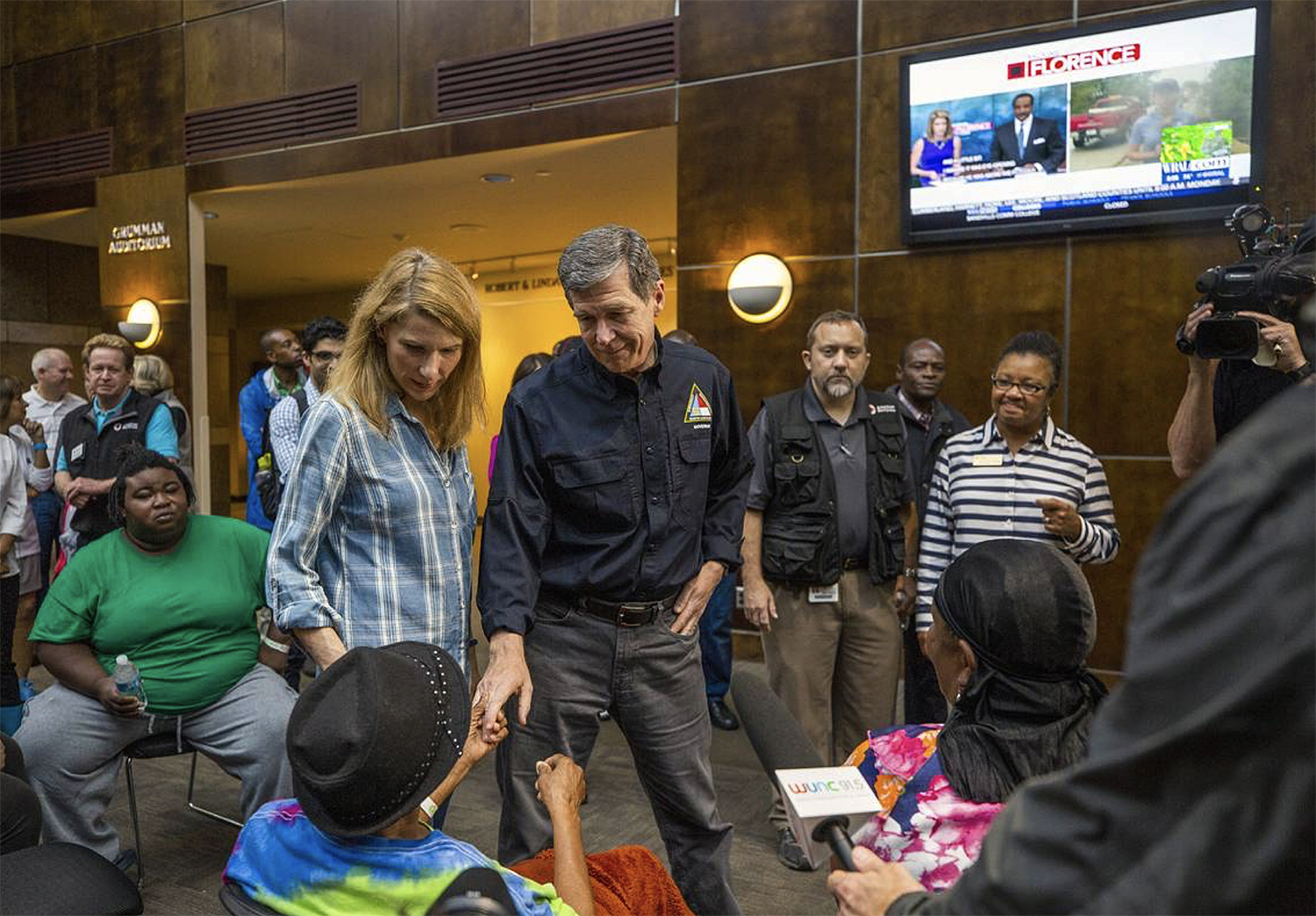 Hundreds of residents of storm-battered and flooded eastern North Carolina took shelter at the William and Ida Friday Center for Continuing Education beginning the day after Hurricane Florence blew in at Wilmington.

People forced out of their homes were bused to Chapel Hill by various county agencies, where they found cots, food, children’s activities and therapy dogs in the center’s large meeting rooms. Nearly 500 were in the shelter at the peak occupancy.

The Friday Center is the centerpiece of a complex of education-related buildings on a site owned by the University about a mile east of the main campus. The University made it available to the state, which partnered with the American Red Cross and nursing and veterinary agencies to run the shelter.

“It was an amazing partnership,” said Dianna Van Horn, an assistant director of external relations with the Red Cross. “We had a wonderful time working with the University. We would not hesitate to work with them again.”

Van Horn was on her way out of town on Sep. 26, with fewer than 50 people remaining in the shelter as counties worked to get as many as possible closer to their homes.

She said the personnel included UNC faculty who could speak Swahili who were asked to come in — news reports indicated some of those at the shelter were refugees from the Congo who had settled in the New Bern area, which was hit hard by the hurricane.

The Chapel Hill site was one of two large-scale shelters set up to accommodate those who found local shelters closing after the initial emergency. The other was in the Lawrence Joel Veterans Memorial Coliseum in Winston-Salem.

“It’s important for us to have these safe places for people to come because they are making the life decision to leave their homes and evacuate instead of staying there,” Cooper said. “We know that these shelters are important because people need a safe place to come.”

Costs of operating the shelter were shared among various agencies and the state, Van Horn said. She said she believed the Red Cross was primarily responsible for buying the food.

The Friday Center planned to leave the shelter available as long as it was needed.

The Carolina Center for Public Service coordinated aid efforts for the campus.

The center provided details on how to:

• Help those affected by the storm in Native American communities such as the Coharie, Lumbee and Waccamaw Siouan tribes in southeastern North Carolina.

On Sep. 27, the University announced a $2 million Florence Student Emergency Fund to provide support to students faced with unexpected financial hardships. The fund is part of a broader relief effort to assist students and families who were affected by the hurricane.

The University will provide $1 million for the initiative from the University’s trademark licensing revenue and income from UNC Student Stores, in addition to funding that the University has already committed to need-based scholarships. The additional $1 million will be raised through a philanthropic match. The campus and the community can donate at giving.unc.edu/gift/relief.

“Today we are sending a clear message to our students who were affected by the devastation of Hurricane Florence and their families: We are here for you,” Chancellor Carol L. Folt said. “Recovering from a storm like Hurricane Florence takes time and resources. Carolina is a generous, caring community and many who were spared the fury of Florence have asked how they can help students whose families are still suffering in its aftermath. We’re grateful to be able to create this fund to support our fellow Tar Heels in their time of need.”

Carolina students who are experiencing financial hardship due to Hurricane Florence and wish to take advantage of the new fund should contact the Student Success Hub in Room 2416 at the Carolina Union or send an email to florence@unc.edu. The Hub contains specially trained teams who will work with students to develop individualized plans to meet their needs. 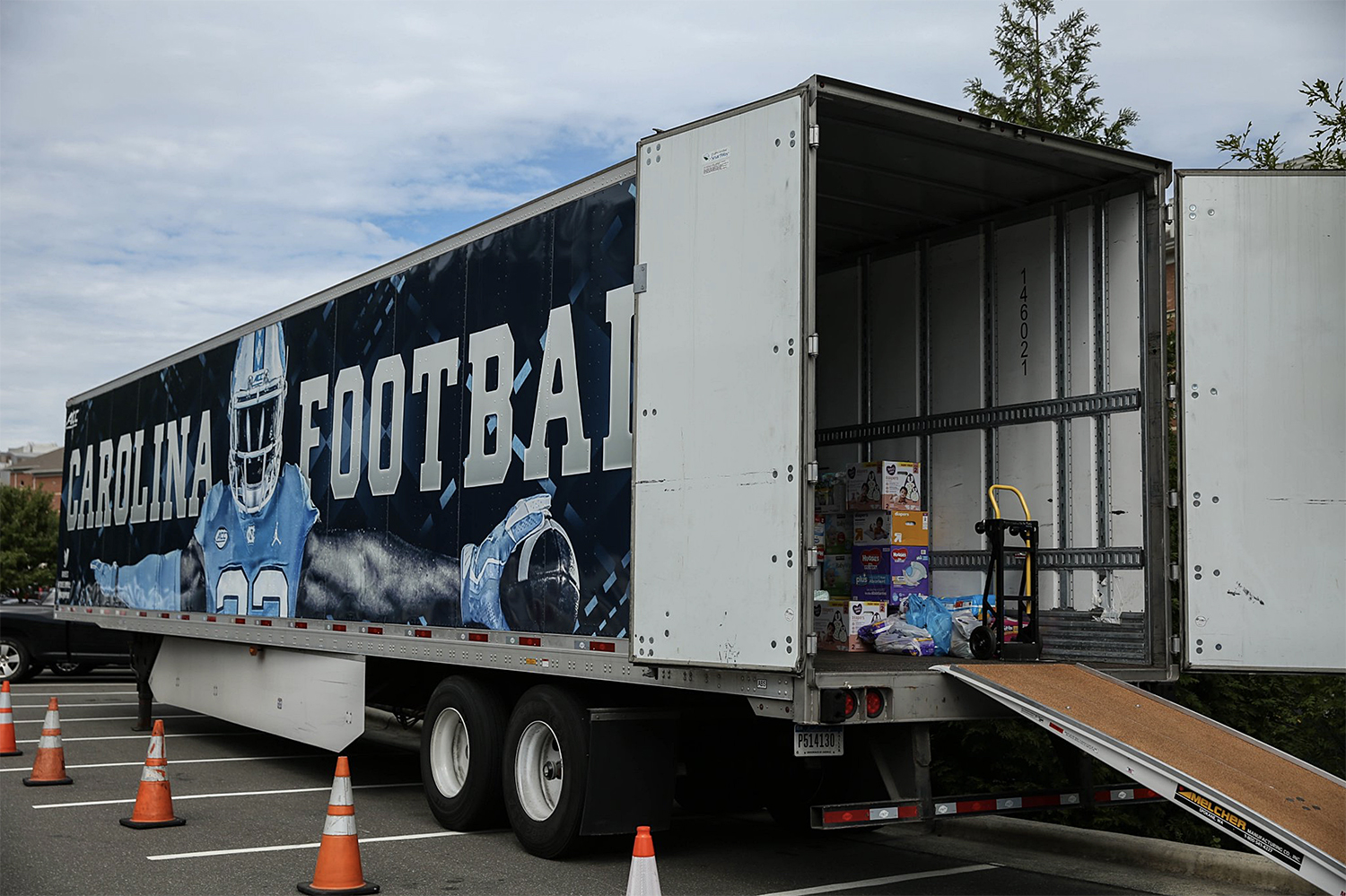 The Carolina football team filled its 18-wheel equipment truck with relief supplies for the hardest-hit locations. (@TarHeelFootball via Twitter)

“During times like this, we really see Tar Heels come together and do what they can to support each other,” said Undergraduate Admissions Director Steve Farmer. “We’ve heard from so many people in the community who want to contribute, and this fund is just one way to connect people who want to help those who need it most.”

In a message to the campus community in the days after the storm, Provost Robert Blouin cautioned faculty members that some students from the affected areas “may require more time, and even those who have returned to campus may be preoccupied with worry about family members, their homes, and their livelihoods. The next few weeks may prove challenging for these students.”

“I am instructing all faculty members to exercise extraordinary care and flexibility in their work with affected students. When in doubt, please err on the side of compassion and generosity, suspending penalties related to missed classes for students who have not yet been able to return. Other short-term ways to help include: recording class sessions and posting the video online; making other materials available online, including lecture notes and presentations; and/or holding optional class meetings, study sessions, or project-completion sessions, and making those materials available online.”

Early in the week after the hurricane came ashore, the football team began loading its 18-wheel equipment truck with relief supplies to the hardest-hit locations.

Nonperishable food items and pop-top canned goods were accepted. In partnership with the Center for Public Service, undergraduate student volunteers worked to receive, load and sort the donations — by the second day, more than 300 cars had driven up to donate.

“We know there are a lot of people out there who are really hurting right now,” Coach Larry Fedora said. “So anything we can do to make it a little bit easier for them, we wanted to be involved.”

Former Tar Heel linebacker Kevin Reddick Jr. ’13, from New Bern, started a GoFundMe campaign to help his hometown, and he asked Fedora for the football program’s support. Fedora discussed it with the team, and a spokesperson said each player donated his $15 daily meal stipend to Reddick’s cause.

The truck left at the end of the week for Lumberton, with other locations to be determined along the way.

“We have a football game to prepare for,” Fedora said, “but that’s really not a whole lot when you think about what some of these people are going through.”