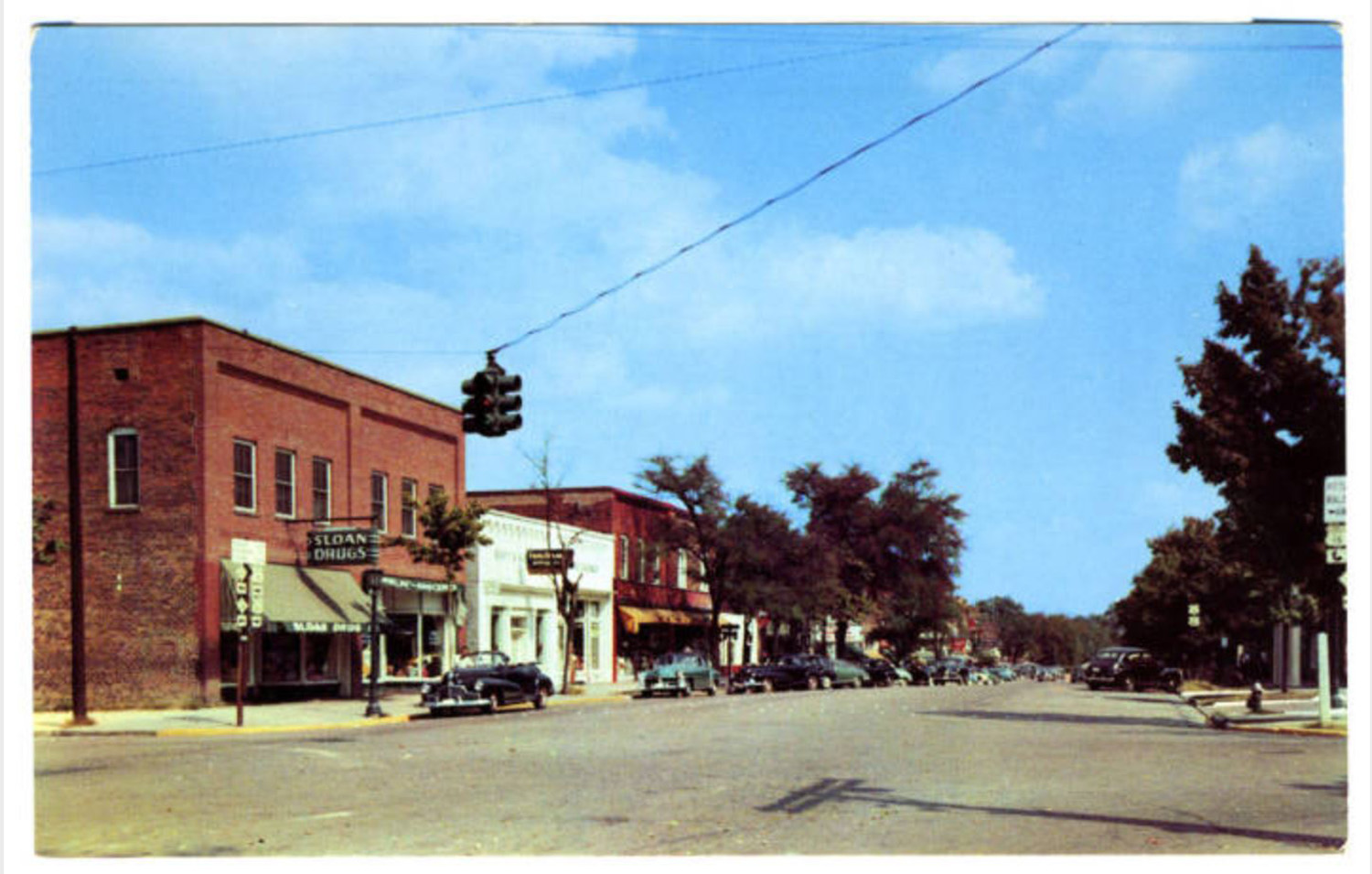 Franklin Street has a colorful past. Take a look at the slideshow below. What was there when you were here? What was your favorite place? Share your memories at the end of this article. (Chapel Hill Historical Society)

To the unaugmented eye, the Franklin Centre at 128 E. Franklin St. might look like just another warren of small shops. But visitors taking a recently launched virtual history tour can use smartphones as time portals to the building’s many past lives.

The Pickwick Theatre opened there in the 1910s, which explains the spiral staircase in the entry that winds down to where there once was orchestra seating. By 1935, it had modernized to house The Pickwick movie theater at night but by day served as the town’s courtroom. In the 1950s, it was Robbins department store, and in the ’70s a music hall and Mad Hatter’s restaurant. It was renovated again in the 1980s and has been home to popular shops such as Johnny T-shirt, Cosmic Cantina and Who’s Next Barber Shop.

“That is the best example of how much can change over time in the same spot,” said Joe Petrizzi ’13.

Petrizzi, the GAA’s coordinator of alumni outreach, has teamed up with Chapel Hill business and UNC arts advocates to help visitors explore the otherwise unseen history of some downtown buildings. Anyone with a smartphone camera — no extra app needed — can scan icons on posters at selected locations and get a peek at what was there in years gone by.

Besides offering the history lesson, the project is another effort to attract visitors downtown with the hope that they’ll patronize current businesses resuming normal activities as pandemic restrictions recede. Downtown empties out after Commencement, said Marilyn Payne of the Chapel Hill Downtown Partnership, a town-funded organization that helps downtown businesses thrive.

“We want to put bodies downtown during the summer, which is always a challenge,” she said.

The tour developed from two other efforts to attract visitors downtown and generate support for an economy walloped by the pandemic.

Payne and Crystal Wu of UNC’s Arts Everywhere program had created an ARt (as in augmented reality) Walk last year in which participants used smartphones to scan icons at spots downtown to view original art works.

Then Payne had worked with Petrizzi on the GAA’s Downtown Chapel Hill: Then, Now and Always, a recent six-part virtual series about how downtown businesses have changed over generations. Viewers paid a $5-per-episode fee to access the Zoom panel discussions among business owners and residents who had lived the history, with each episode exploring a different aspect: music and art venues, retail shops, bars, restaurants, coffee shops and Black-owned businesses. (The $1,800 in registration fees and other contributions went to the partnership’s Experience Downtown initiative to stimulate business and was used to buy special signs for parking spaces set aside for customers picking up takeout orders.)

Payne, Wu and Petrizzi worked together to apply the art walk theme to the downtown history: ARt Walk on Franklin: Then, Now and Always. It was a concept that already had piqued Petrizzi’s interest.

“When I was in graduate school, I had a thought about using the street view function on Google maps [to] pick a year and see what it looked like then and now,” Petrizzi said. “But I didn’t have the technological know-how.”

Turns out, UNC’s AR/VR (Augmented Reality and Virtual Reality) club did. Club leader Micah Haycraft ’21 recruited nine coders and software developers from the club to help. Arts Everywhere had worked with the club in the past, Wu said, and was looking for more opportunities to collaborate with members and showcase their work.

“The ARt Walk was born out of a desire to reimagine the typical pop-up art exhibit into something that would be accessible despite pandemic restrictions [and] to support local businesses by bringing more foot traffic to downtown,” she said.

She, Payne and Petrizzi “decided to join forces and use this technology to highlight the history and resiliency of the businesses downtown through historic photographs,” Wu said.

At the end of each episode of the GAA’s online downtown history series, participants had been asked: “What was your favorite … ?” Petrizzi and Payne drew on those responses to create a list of 60 buildings that likely would resonate with alumni and the local community. They pared the list to 21; the tour would launch on May 14 during the class of 2021’s Commencement weekend.

The exhibit will stay active through July 5. Viewers scan a unique icon on posters at the front of the 21 locations, and up pops an archived photo of what the building looked like long ago.

Another building on the tour, 101 E. Franklin St., sits at the northeast corner of Franklin and Columbia streets, well known in recent decades as the home of Spanky’s restaurant and bar. Few passersby likely know that it was perhaps downtown’s first high-rise. About a decade after it opened in 1902 as a grocery and dry goods store, a third story was added and remained for about 25 years before the building was declared unstable and that top floor lopped off. At various times, it also housed the Pickwick Theatre as well as a Masonic dormitory and a skating rink.

“This whole series confirmed how much being a Carolina student comes with what Chapel Hill is all about,” he said. “You can’t take the campus out and remove it from Chapel Hill and have people feel the same connection to the University. They wouldn’t have had the same experience at Carolina without Chapel Hill beside it.”

Petrizzi, Payne and Wu might revive the exhibit for the fall semester, when alumni return for football games. Or he and Wu might create a new exhibit focusing only on campus buildings.

“We’d like to have that ready for move-in weekend or family weekend,” Petrizzi said.

“I’ll always be looking for cool ways to share history.”