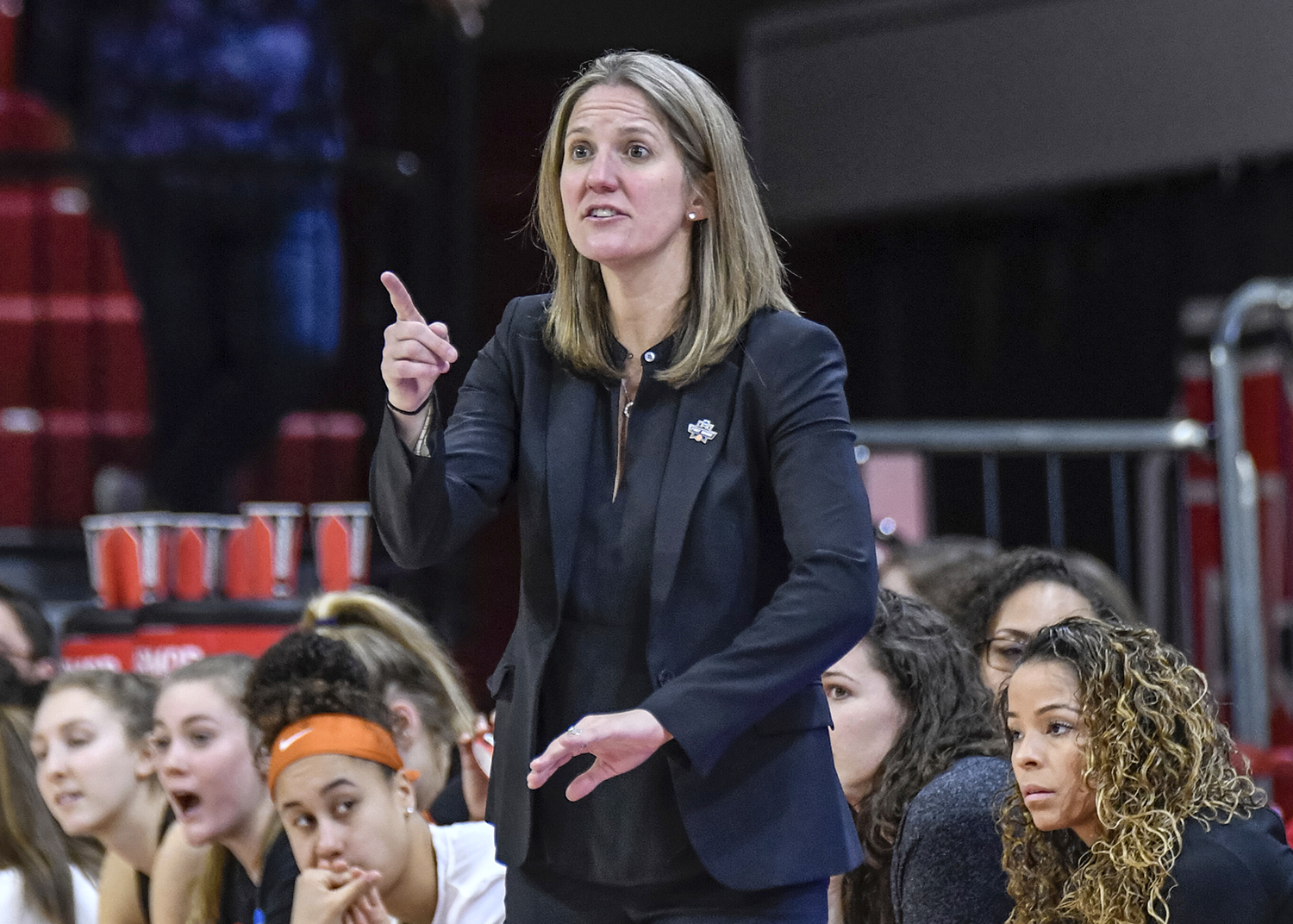 Courtney Banghart, who was named Naismith National Coach of the Year in 2015, succeeds Sylva Hatchell as women’s basketball coach at Carolina. (AP Images)

Courtney Banghart, who took over a Princeton team that never had been to the NCAA tournament and got them there in eight of the past 10 years, has been named women’s basketball coach at Carolina.

Banghart — chosen one of Fortune magazine’s 50 World’s Greatest Leaders in 2015 after Princeton’s fifth Ivy League championship in her first eight years — led the Tigers that year to an undefeated 30-0 regular season, the best in Ivy League basketball history, men’s or women’s.

The 40-year-old coach whose appointment was approved by the UNC trustees Tuesday was a three-year starter in her playing days at Dartmouth, where she later was an assistant coach for three years before going to Princeton.

She succeeds Sylva Hatchell, the 33-year Tar Heels coach who resigned under pressure two weeks ago after a review of her program found that she had made racially insensitive comments and was perceived by some players to have had undue influence regarding injuries and pressure to keep playing.

Banghart, who was named Naismith National Coach of the Year in 2015, will attempt to fill the shoes of a Naismith Hall of Fame member who is the only coach whose teams have won national championships under three different sanctioning bodies of women’s college basketball.

“I’m so grateful to everyone who has made Carolina what it is: the women who have worn the Carolina blue, Coach Hatchell who hung a banner, the men’s program that brought us the Jumpman, the outstanding coaches who have been a model of consistent excellence, and the alumni who have loved this place with all their hearts,” Banghart said. “I’m honored to be your coach, and you will get my very best.”

A native of Amherst, N.H., Banghart’s coaching record is 254-103 overall and 137-31 in the Ivy League, with seven Ivy League championships in her 12 years at Princeton. The trustees approved a five-year contract that will pay her $3.45 million over than span, plus bonuses related to grade point average, the NCAA Academic Progress Rate, post-season tournament appearances and championships.

After a losing season her first year and a .500 record in her second, Banghart led the Tigers to a 26-3 record in 2009-10 and their first ticket to the NCAA tournament. She earned multiple national honors after the 2014-15 season, during which Princeton reached a No. 13 Associated Press national ranking and won its first-round NCAA tournament game, only the second Ivy League team to do that.

As a player, Banghart holds the Ivy League record with 273 career three-pointers; in 1999, she was best in the country in Division I with 97.

After earning a bachelor’s degree in neuroscience in 2000, Banghart worked at Episcopal High School in Alexandria, Va., where she was the girls’ athletic director and the head coach of the girls’ basketball and tennis teams. Returning to her alma mater, she earned a master’s degree in writing and leadership development in 2007 while spending four seasons as an assistant coach for Dartmouth.

She is on the board of directors for the Women’s Basketball Coaches Association.

Hatchell was diagnosed with leukemia in October 2013. She went through chemotherapy treatments that lasted into March 2014. Two months later, her doctor announced that she had completed treatments and would be back on the bench for the 2014-15 season.

The University has not shared details of the review of the program conducted by the Charlotte law firm Parker Poe Adams & Bernstein beginning in March. The firm interviewed 28 current players and personnel connected to the program, UNC said, “and found widespread support for three overarching themes”:

Hatchell said in a statement: “This year, after defeating Notre Dame, the top-ranked team in the country, and returning to the NCAA Tournament, our program is once again headed in the right direction and ready for new leadership. … While this is a bittersweet day, my faith remains strong. After the fight of my life with leukemia, I count every day as a blessing. I am grateful that God granted me more days on this earth to continue my calling as a coach.”

An athletics department spokesman said Tuesday that the three assistant coaches have left UNC. Andrew Calder, who was with Hatchell all her 33 years, has retired; Sylvia Crawley has resigned. West Virginia University announced that Bett Shelby has been named its associate head coach.