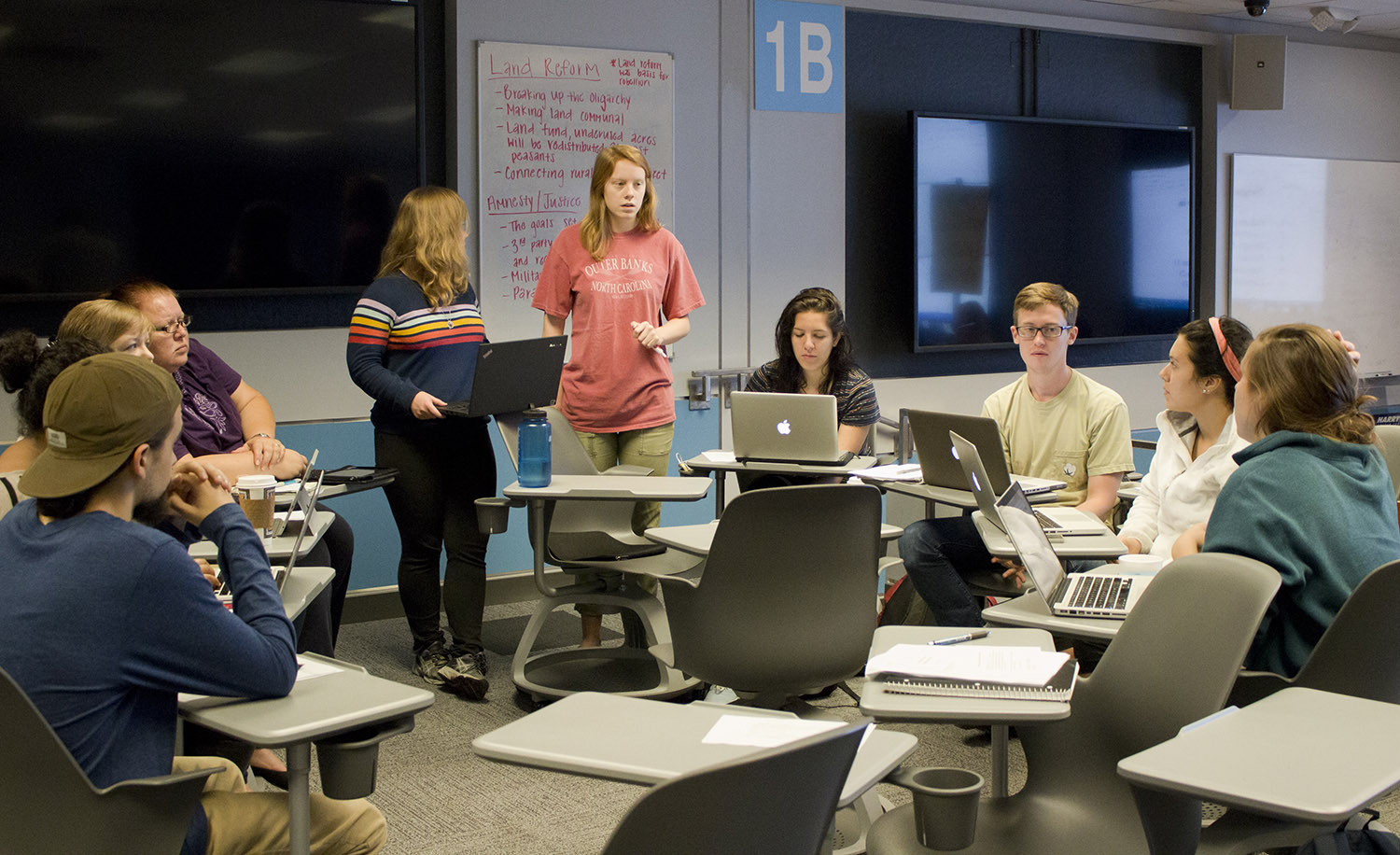 The University is expanding its commitment to access and affordability for North Carolina families with a new $20 million scholarship initiative to provide financial aid for middle-income undergraduate students from North Carolina.

The Blue Sky Scholars program — announced on Oct. 12, University Day — will begin with a $5 million gift from former UNC System President Erskine Bowles ’67, and the University plans to raise an additional $15 million in the effort. The goal is to fill an important gap, one that involves exceptionally qualified North Carolina residents from middle-class backgrounds who qualify for financial aid but do not meet the requirements for The Carolina Covenant — UNC’s groundbreaking program to guarantee that students from low-income families can graduate debt-free.

Middle-income students are classified as those whose household incomes average $75,000 per year, and they make up the majority of North Carolinians who receive need-based aid at Carolina. For every low-income student eligible for The Carolina Covenant, the University says there are two middle-income students supported by other forms of institutionally funded aid. The average debt for the graduating class of 2017 was approximately $22,000, which is 22 percent less than the national average. The University estimates the Blue Sky Scholars will graduate with debt of $10,000 or less.

“Today it is my pleasure to announce the Blue Sky Scholars program to help middle-class families facing the overwhelming burden of college debt. This distinctive program expands Carolina’s commitment to excellent, affordable higher education for the hardworking people in our state,” Chancellor Carol L. Folt said in announcing the program during the annual University Day ceremony honoring the 225th anniversary of Carolina’s founding as the nation’s first public university.

“Thanks to a generous lead gift from Erskine Bowles, we will make the promise of a Carolina education possible for even more students and their families, regardless of their ability to pay.”

The admissions and student aid offices will identify students for the new scholarships based on academic and extracurricular achievement and potential, demonstrated work ethic and sense of responsibility to family and community. As part of their finalized financial aid package, Blue Sky Scholars will receive:

• A one-time enrichment award of $2,500 to support internships, study abroad or other opportunities that enhance their Carolina experience and;

“We want to recruit more of these promising, middle-income students and set them up to succeed while at Carolina and well beyond graduation,” Bowles said. “Not only are we helping prepare tomorrow’s leaders, we’ll help them hit the ground running in a modern workforce and without burdensome college debt.”

Bowles’ gift supports The Carolina Edge, an initiative of the University’s $4.25 billion fundraising campaign. For All Kind: The Campaign for Carolina is the most ambitious university fundraising campaign in the Southeast and in Carolina history. Nearly one-quarter of the overall campaign goal, $1 billion, will fund undergraduate scholarships and graduate fellowships to ensure the University can recruit the very best students.

Bowles, of Greensboro, co-founded Carousel Capital, a Charlotte-based middle-market private equity firm. He also has served on the boards of various companies, including Morgan Stanley, Merck, Norfolk & Southern and Facebook. In 1991, Bowles served as administrator of the Small Business Administration under President Bill Clinton and later as Clinton’s deputy chief of staff and chief of staff. From 2005 to 2011, Bowles was president of the UNC System. He was awarded the GAA’s Distinguished Service Medal in 2011.