Spencer Cooke had seen a Carolina class ring many times before getting his own. He... 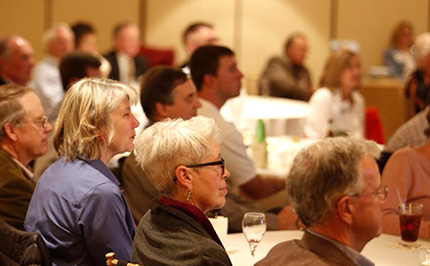 The parkway, which originated with the New Deal in the mid-1930s, has been the most popular destination in the U.S. National Park System almost every year since 1946.

A place of stunning beauty, the parkway’s history and what it takes to sustain it often are taken for granted, said Anne Mitchell Whisnant ’91 (MA, ’97 PhD), an adjunct history professor at UNC and author of the book Super-Scenic Motorway: A Blue Ridge Parkway History.

There’s a sense that “the parkway was put there by nature … it’s sort of this magical thing that just happened,” Whisnant told about three dozen alumni and friends at the second event this week of the GAA’s Virginia is for Tar Heels program.

The parkway, however, was 52 years in the making, and it was controversial from day one. Over the years, said Whisnant, who has been studying the parkway since 1991, the development and maintenance of the road have been fraught with fierce disputes over land acquisition and development.

She illustrated her point with examples of turf battles both large and small. One involved S.A. Miller, who objected to losing 20 acres of his farmland in Ashe County, N.C., to the parkway.

“I’m writing you in regard to my farm on the Blue Ridge Mountain where the Park to Park high way goes. It goes through the middle of my farm. … The state don’t offer me the worth of my land, not counting the damages any thing,” wrote Miller in a letter to President Franklin D. Roosevelt in 1937.

Miller ultimately lost the land, for which he received about $30 an acre.

Former N.C. Supreme Court Justice Heriot Clarkson also lobbied to retain land that was part of the Little Switzerland resort community he developed in western North Carolina. Wielding much more influence than Miller, Clarkson — who studied law at UNC for several months in 1884 and received an honorary degree in 1928 — was able to obtain several concessions, including four access points to the parkway and nearly $375 an acre for 88 acres of land.

Whisnant shed light on the parkway’s complexity for many of those who attended the Roanoke event, including Josh Robertson, a GAA member who has lived near the parkway in the Roanoke and Rocky Mount areas of Virginia all his life.

“You don’t really think about, ‘How did it get here?’ You just think, ‘It’s here,’ ” Robertson said, adding that he had assumed the parkway was simply a former footpath or wagon trail.

Jim Newlin ’69, who also earned a master’s degree in regional planning from UNC in 1971, is an avid parkway supporter. Six years ago, he moved from Raleigh to the Meadows of Dan in southwest Virginia, joining several alumni and other North Carolina transplants who jokingly call the area the “University of Northern North Carolina at Meadows of Dan — or UNNCMOD.” Newlin asked Whisnant about the role played by former U.S. Rep. Robert Doughton in determining its final path.

Doughton, a Democrat from Laurel Springs, N.C., who received an honorary degree from Carolina in 1945, chaired the House Ways and Means Committee and was in a position to wield influence when a key decision was made in the 1930s to exclude Tennessee and keep the entire southern portion of the parkway in North Carolina.

“He was definitely, from my research, a key part of these various delegations that were going around trying to lobby Roosevelt and [Secretary of the Interior Harold] Ickes on behalf of North Carolina’s route,” Whisnant said. “But I don’t find in the record any evidence that Doughton was the key to this.”

Five events are occurring this week to celebrate Tar Heel pride in Virginia, which has the largest number of UNC alumni outside of North Carolina. The first program was in Norfolk on Monday; coming up are Richmond on Wednesday, Alexandria on Thursday and Charlottesville on Friday, each featuring different UNC speakers.