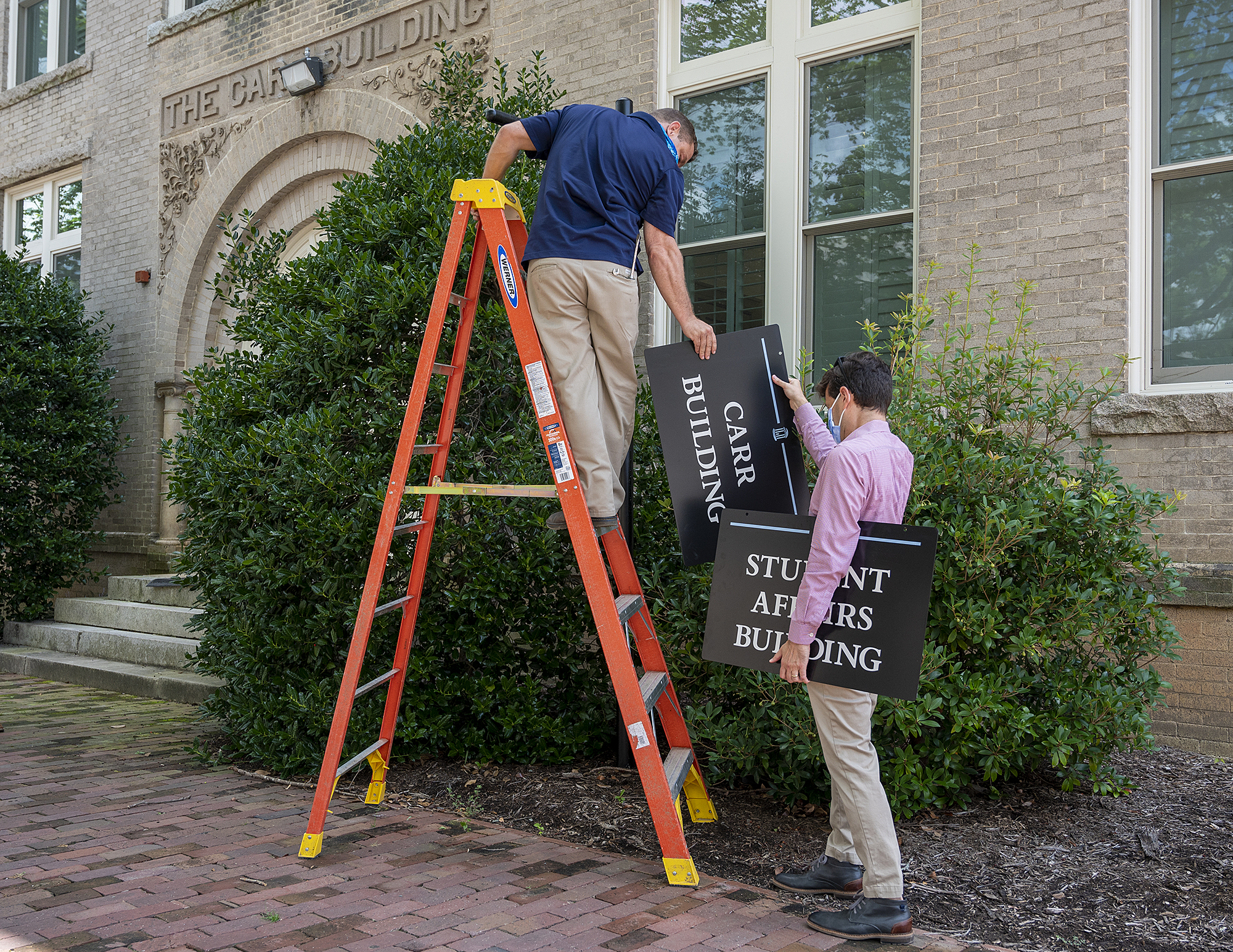 Signs are switched after the Board of Trustees on Wednesday decided in 11-2 votes to remove the naming honor from Aycock Residence Hall, the Daniels Building that houses student stores, and the student affairs headquarters Carr Building. Carr Building will be the Student Affairs Building at least for the time being. (Grant Halverson ‘93)

The Board of Trustees on Wednesday decided in 11-2 votes to remove the naming honor from Aycock Residence Hall, the Daniels Building that houses student stores, and the student affairs headquarters Carr Building — all for the namesakes’ connections to white supremacy.

They left an asterisk. Ruffin Residence Hall is named for father and son, and Thomas Ruffin Jr.’s name — which has not been identified with white supremacy — was left on the building pending further research.

The other buildings are to be known for the time being as Residence Hall One (for Aycock), the Student Affairs Building and the Student Stores. Signs saying “Thomas Ruffin Jr.” were placed on Ruffin Hall Thursday.

Trustees Allie Ray McCullen ’67 and John Preyer ’90 voted no in each vote and repeated previous concerns about name removal.

The University has a longstanding committee and procedure for naming buildings and areas of the campus, to which the matter presumably now will go.

“I wholeheartedly concur” with the direction of the board, Guskiewicz said. “The rationale for removal is clear and convincing. The actions of these individuals was egregious even for their time.” To keep the names, he said, would “impede our integrity.”

“Our charter, which references the happiness of a rising generation, was written in another era and didn’t include all people in our state. Today, I hope we take another step to move forward and expand the meaning of that charter and bring every member of this rising generation into a more inclusive community.”

Preyer said the board needed to consider forgiveness.

Read profiles of the men whose names were removed from four campus buildings, produced by the History, Race and a Way Forward Commission from its research.

“The exercise of de-naming has become more in my view of a rush to purge the names of these alumni who were once deemed noteworthy, now they’re deemed pariahs, in order to have action now at the expense of what was intended to be a deliberative process. I believe that exercises like this do not serve to unite us, to make the University stronger — instead they serve to divide us and make the University weaker.

“So today we’re going to sit in judgment of these four alumni and determine whether or not their names should be on campus buildings. So much for the admonition that judge not lest ye be judged. Instead of judging these alumni, I think we should do something more meaningful and more significant: We should forgive them and ask for forgiveness from their families for the embarrassment this has caused them.”

Preyer suggested a campus ceremony next fall with the families present and that the names remain “in the name of forgiveness.”

Carr and Ruffin Sr. are not alumni; alumni status is not required for building names. Ruffin Jr. graduated in 1844.

“We didn’t shoot from the hip on this,” said trustee David Boliek ’90. “We created a process that I think is concise, detailed and gives not only the chancellor but alumni … and members of the greater community part of the decision process when it comes to renaming a building. We need to be cognizant of making our University a welcoming place.”

The Commission on History, Race and a Way Forward, formed by Guskiewicz when he became chancellor in December, said in its recommendation:

“We believe that these names warrant immediate action. The elder Ruffin, Aycock, Daniels and Carr occupied high positions of influence and public trust. Ruffin served on the North Carolina Supreme Court from 1829 to 1852, and again from 1858 to 1859. For all but four of those years, he presided as chief justice. Among legal scholars, his ruling in State v. Mann (1829) is known as ‘the coldest and starkest defense of the physical violence inherent in slavery that ever appeared in an American judicial opinion.’

“Aycock, Daniels and Carr led the Democratic Party’s white supremacy campaigns of 1898 and 1900. Aycock was a key strategist in both campaigns and ran as the party’s gubernatorial candidate in 1900; Daniels, editor and publisher of the Raleigh News and Observer, served as chief propagandist; and Carr, a Durham industrialist and leader of the United Confederate Veterans in North Carolina, provided financial backing.

“Together, they fought to disenfranchise Back men and to establish the regime of Jim Crow, which for more than half a century denied Black North Carolinians equal justice and the fundamental rights of citizenship.”

(Thomas Ruffin Jr. was a lawyer, one-term legislator, and former Confederate officer. He served briefly as an associate justice on the N.C. Supreme Court (1881-83) but otherwise left no distinctive mark on jurisprudence, the commission found.)

“Aycock, Carr, Daniels and the elder Ruffin were not simply men of their times. Instead, they wielded power, wealth and influence to define the historical moments in which they lived.”

“White civic leaders, politicians, and scholars labored in the new century to characterize slavery as a benevolent institution, to glorify secession as a principled defense of the Constitution, and to make patriots of the men who went to war against the United States. At UNC, that project found expression in the classroom and in faculty scholarship, in the erection of a Confederate monument and in a scramble during the 1910s and 1920s to name campus buildings for slave owners, Confederate officers, Klansmen, and avowed white supremacists.”

“Today, the presence of these names on the landscape is a testament to the success of the neo-Confederates’ historical project and the ways that it continues to shape what, in public memory, is known and forgotten about slavery, the Confederacy and the Jim Crow South.

“We believe that other names on the landscape warrant action. We will make additional recommendations based on archival research and engagement with stakeholders on campus and in the broader community.”

In July, the chairs of the departments of history, political science and sociology and of the curriculum in peace, war and defense asked the Commission on History, Race and a Way Forward to recommend removing the name of J.G. de Roulhac Hamilton from the 48-year-old building where their departments are headquartered. That has not yet been addressed under the removal policy.

Hamilton’s name is on lists of white supremacists for whom campus buildings are named. “His own research focused on Reconstruction and praised the role of the Ku Klux Klan,” according to UNC Libraries.

The department chairs suggest the building be renamed for civil rights activist Pauli Murray, who was descended from enslaved people in Orange County and was denied admission to UNC’s graduate program in sociology in 1938 because she was African American.