When the Berlin Wall Came Down

Alumni, Faculty Recall Momentous Change in Berlin Michael Martine ’91 had a front-row seat for history in the making. When the Berlin Wall began to fall on Nov. 9, 1989, he was sitting on top... 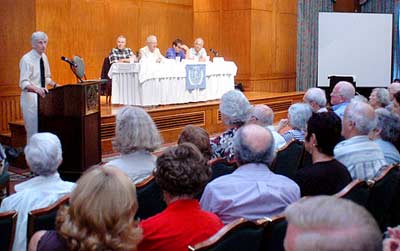 Marty Rosenbluth has 20 years of experience as a human rights activist focused on the Middle East, but at a panel discussion on Thursday, he relied on the moms and dads in the audience to explain the crisis in Lebanon.

“How many people have heard from their kids, ‘He hit me first?’ ” asked Rosenbluth, a Palestine specialist for Amnesty International USA and a Carolina law student. “This is exactly what’s going on. The Israelis and Hezbollah are both justifying their violation of international law based on the fact that the other side did it first, and that’s just not acceptable.”

More than 300 people attended the forum, titled “Escalating Crisis in the Middle East: Issues and Options” and sponsored by the General Alumni Association. The forum, which was organized quickly this week in response to recent Middle East events, was part of the “Think Fast” series, which the GAA conducts to provide timely forums on breaking news stories that dominate the public conscience. The panelists took questions from the audience following their comments.

In addition to Rosenbluth, the panelists were:

Rosenbluth joined the two UNC political scientists, historian and retired U.S. Foreign Service agent to discuss the escalating crisis in the Middle East, where hundreds of Lebanese civilians have died in a conflict between Israel and the Shi’ite Muslim militia Hezbollah. Like many a frazzled parent, Rosenbluth and the other experts were at a loss to suggest a compromise that would satisfy both sides.

“It’s extremely unlikely, given the current situation and the recent history, that there’s going to be successful negotiations between Israel and any of her neighbors,” said McKeown, a political ethicist and expert on the use of force in international conflict.

While McKeown called for more U.S. involvement in brokering peace, Jones said the U.S. is a big part of the problem.

“American policy has been distorted by partisanship for Israel since Lyndon Johnson became president in 1963 and overreach since Bush took over in 2000,” Jones said. “We should disengage.”

Jones said the Middle Eastern conflict is the inevitable “growing pains” of a divided region.

“There is no hope for a peaceful resolution . in our time,” he said. “If they are resolved, they’ll be resolved by force. You have to accept that.”

Jones said Europe endured 1,000 years of civil war before it found peace, and the U.S. only created its “Edenic” society by vanquishing the Native Americans and fighting its own civil war. He said the U.S. might be able to hasten peace in the Middle East if it abandons military solutions to political problems.

“We don’t seem to have learned that lesson,” he said, as the audience applauded.

Though he teased Jones throughout the evening for his pessimism, Hunt agreed that current U.S. policy is not helping the situation.

Hunt compiled a reading list for anyone interested in reading more about this topic. In addition to those works, another notable work regarded as a thought-provoking book about the Middle East is From Beirut to Jerusalem (New York: Anchor Books, 1995) by New York Times writer Thomas L. Friedman. The book was awarded the 1989 National Book Award for nonfiction, and Friedman has twice garnered the Pulitzer Prize as a Times correspondent in Lebanon and Israel.

The forum was held at the George Watts Hill Alumni Center on the UNC campus. Like all “Think Fast” forums, it was open to the public and offered at no charge.