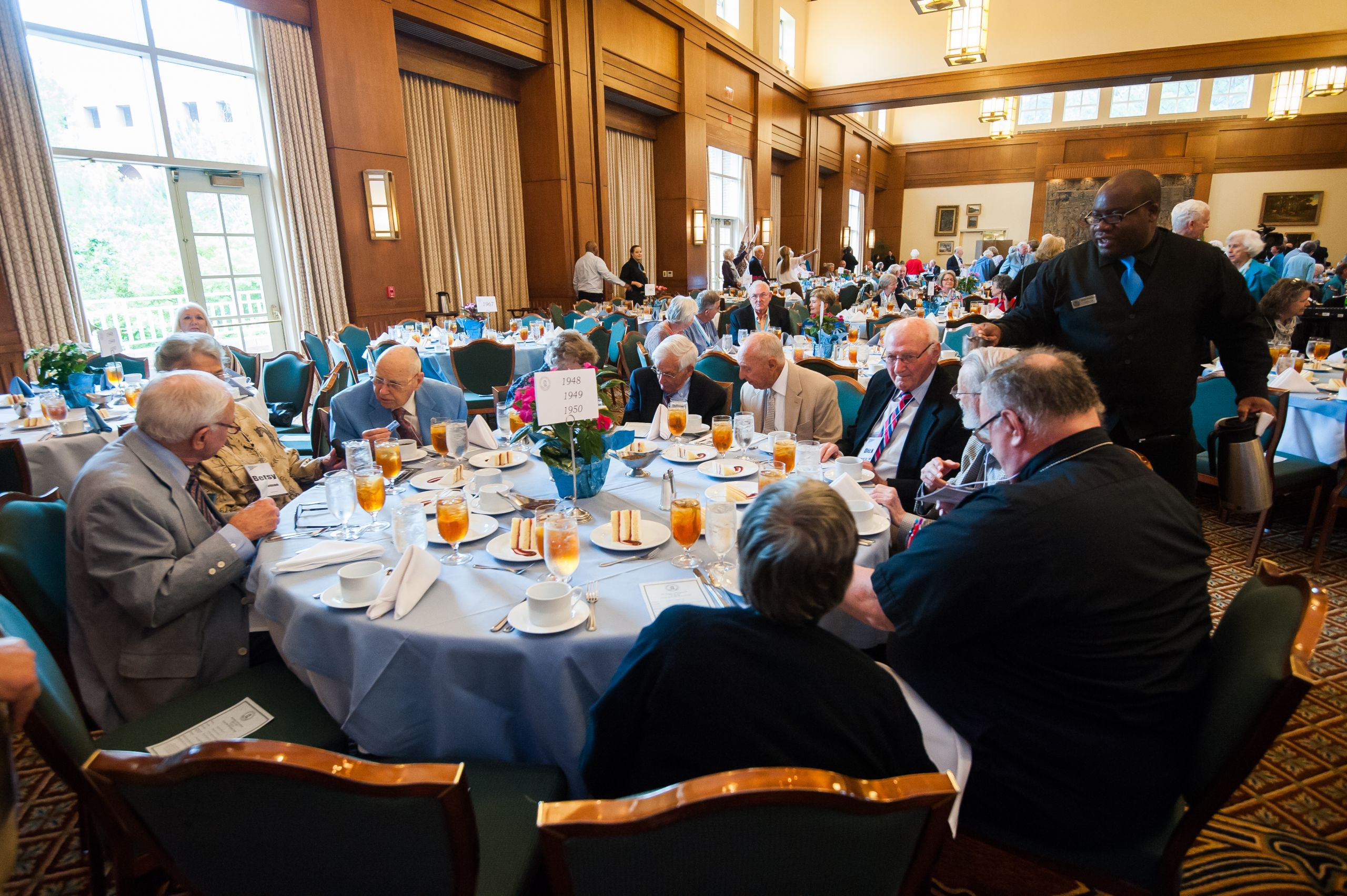 The Old Students Club Luncheon is open to all Carolina alumni whose class graduated at least 50 years ago. James Lee Love (class of 1884) donated funds to the General Alumni Association to host the event without charge to the attendees. (Photo by Shane Snider)

Judy Heller Knauer ’67 said she was a bit hesitant when it came to reserving her spot at the Old Students Club Luncheon, even for a free lunch.

“The title ‘Old Students Luncheon’ was a little off-putting to me,” she said. “But if we’re the youngest of the old students, I guess that feels good.”

James Lee Love, class of 1884, named the Old Students Club, and he picked up the check — as his endowment has for more than 75 years — for Friday’s luncheon, open to all Carolina alumni whose class graduated at least 50 years ago. Love donated funds to the General Alumni Association to host the event once a year to give classmates a chance to catch up with one another and to hear an interesting speaker; and to periodically publish an alumni directory of former students.

Knauer, of Yarmouth Port, Mass., attended Friday with more than 600 alumni and guests at the George Watts Hill Alumni Center, sitting at a full table of her nursing school classmates. She said she was encouraged to see so many who were still healthy, active and doing well.

Given the tumultuous years of their college careers — with racial integration, the Vietnam War and changing roles of women on a still fairly conservative campus — the class of 1967 pushed the envelope, in ways large and small.

“We staged a small rebellion against women’s rules” — such as strict curfews, a dress code that prohibited slacks or shorts, written permission from their parents to leave campus for a weekend — “and we pulled our mattresses out in the hall one night,” Knauer said. “The next day, it made the front page of The Daily Tar Heel.” 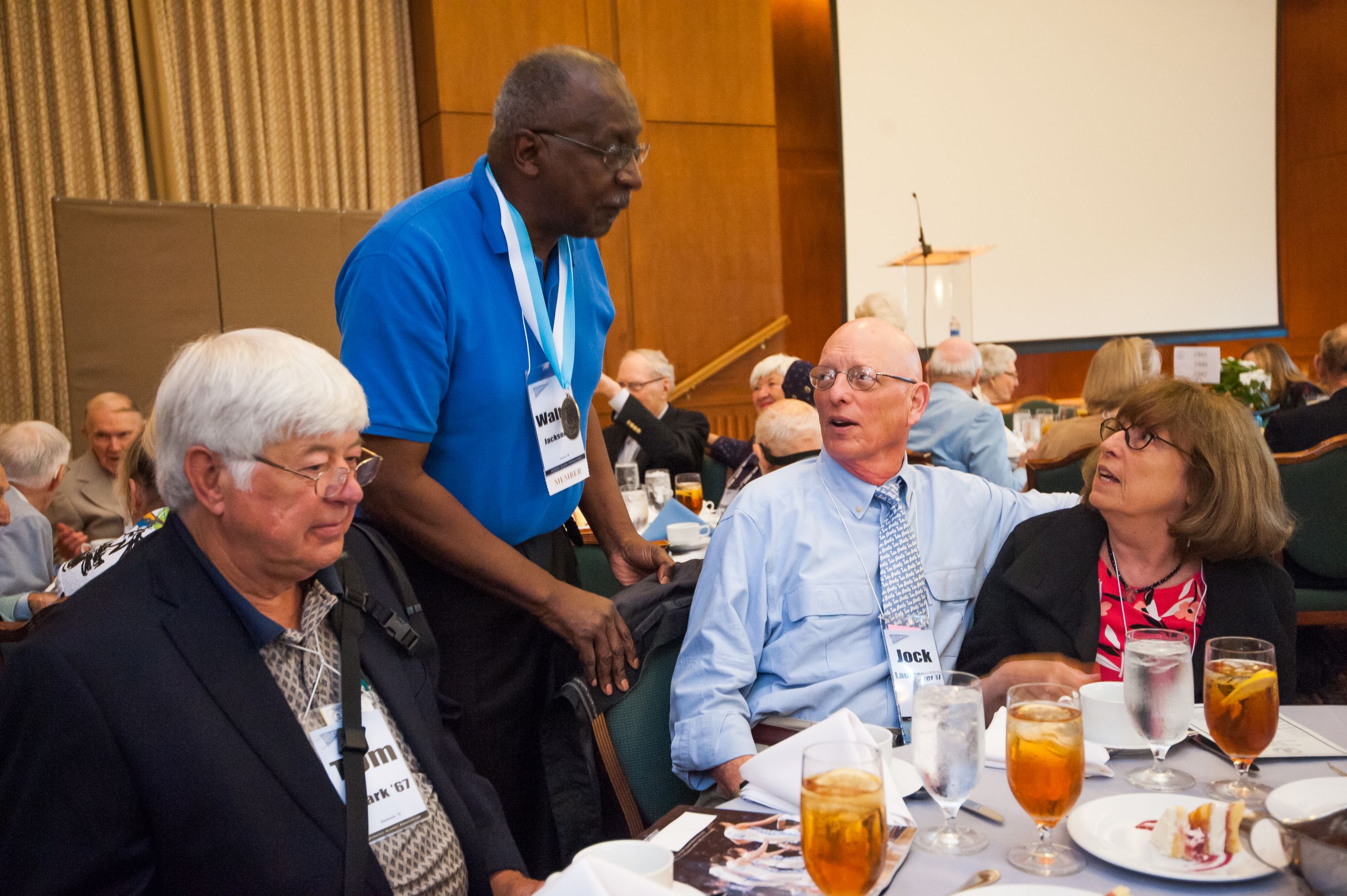 Tom Clark, left, Walter Jackson, Jock Lauterer and his wife, Lynne, all members of the class of ’67, chat about their student days. (Photo by Shane Snider)

Jock Lauterer ’67, of Chapel Hill, was a photographer for The DTH and took roommate Tom Clark ’67 with him when he covered a Ku Klux Klan rally. Lauterer jumped on the stage and shot a flash photo of the Grand Wizard with a burning cross in the background, and a mob closed around him.

“I thought, ‘Jock’s dead,’ ” Clark said, but another DTH reporter, 6-foot-6 Mike Yopp ’68, came to the rescue, and all ended well. Even so, Lauterer asked that his name not be used in the photo credit when The Associated Press picked up the photo to run nationwide.

Clark, of Benbrook, Texas, had his own pressures to face. While some of his classmates protested the Vietnam War on Franklin Street, Clark enrolled in ROTC. As Lauterer prepared to register as a conscientious objector, Clark readied for battle. After graduation, he flew bombing raids over Vietnam in the Air Force. A half-century later, they talked over plates of chicken salad and fruit, and agreed that they both got a world-class education at Carolina.

Walter Jackson ’67, of Durham, also spoke highly of the friendships he forged at Carolina and the changes he helped foment. The quality of the journalism school drew him to UNC; so did the opportunity to help tear down the walls of segregation.

“Carolina offered its challenges for me and other students of color at the time, but none of us has any regrets about making the choice to come here,” he said, “in spite of the toll it might have taken on us psychologically.” 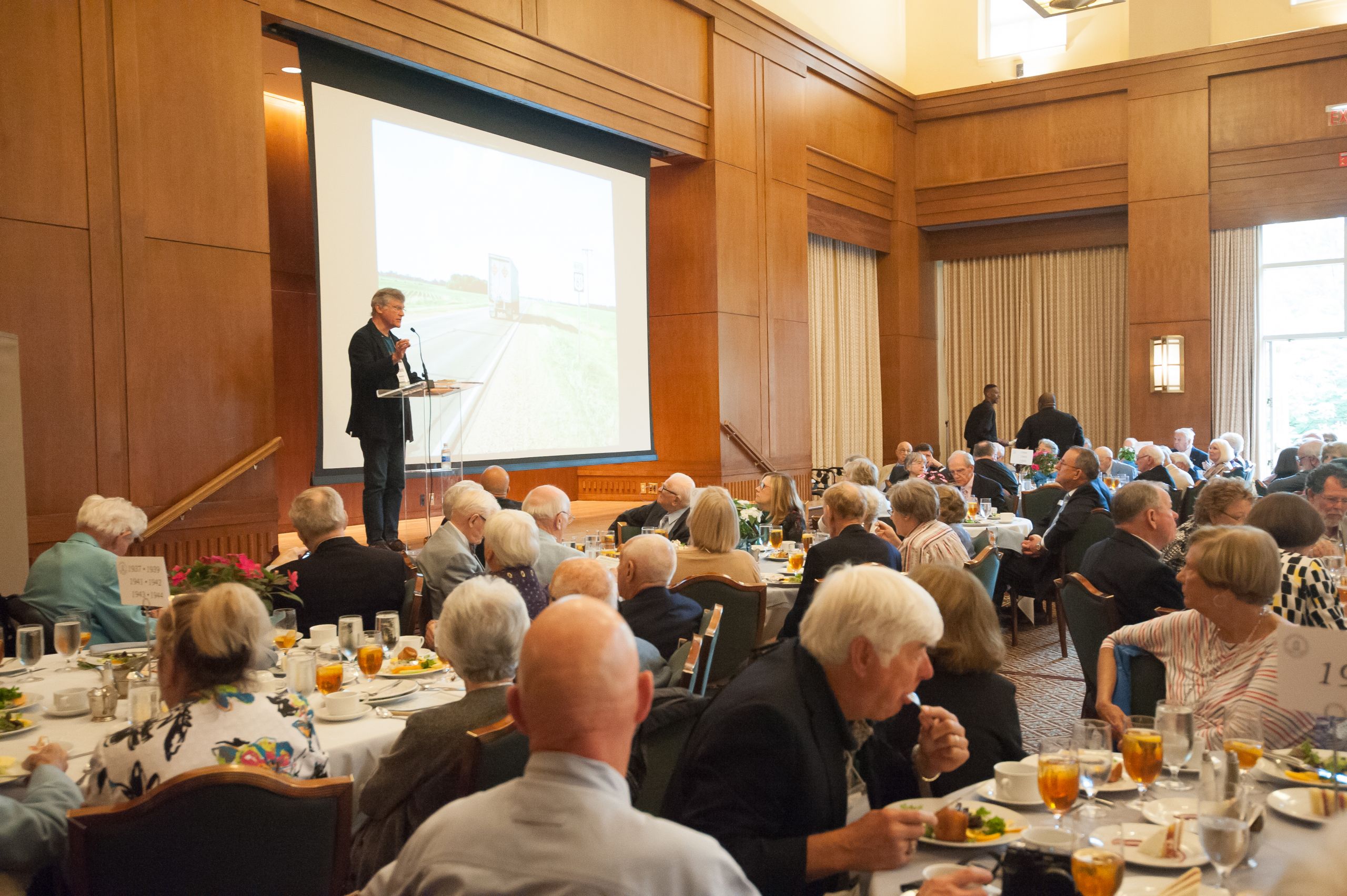 William Ferris, the Joel R. Williamson Eminent Professor of history and senior associate director of the Center for Study of the American South at UNC, was the featured speaker at the luncheon. (Photo by Shane Snider)

He and his classmates challenged the tradition of playing Dixie at football and basketball games and waving big Confederate flags. “We began to raise voices against that kind of practice,” he said. “Beginning to establish an atmosphere where African-Americans could feel comfortable has made a difference for succeeding generations.”

At a table in the front row, the place of honor for the senior members of the Old Students Club, James Faucette ’49, of Yanceyville, a WWII veteran, thought about the values solidified during his years at the University.

“Carolina gave me a great perspective for the future,” he said. “It helped me realize that everybody is somebody. We’re all people, and we should love one another and not discriminate.”