Standing in the tunnel leading from the locker rooms to the field in Kenan Stadium, Winborne Shaffer Chandler ’67 watched the 2017 graduates stream onto the field, filling in the rows of white folding chairs.... 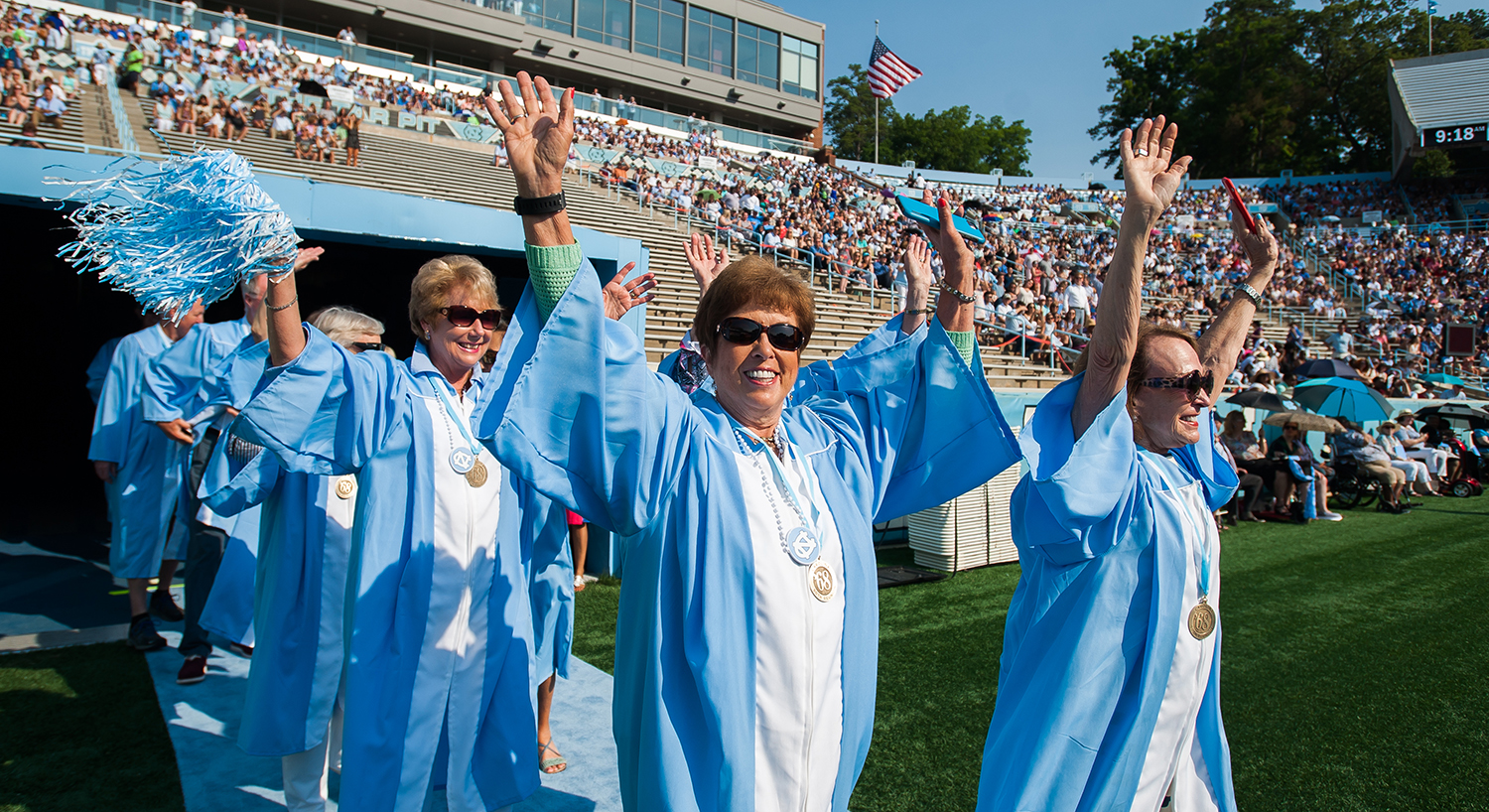 Spring Reunions Weekend, held each year the same weekend as UNC’s Commencement, provides an array of activities for members of the class celebrating the 50th anniversary of their graduation, as well as signature events for members from earlier classes.

The events renew alumni’s interest in issues on campus and off as well as reflecting on the history they lived through as students. Just as often, theses events provide a backdrop — as did the political and cultural events of their college years — for personal stories, conversations and memories. These are a few of those stories. 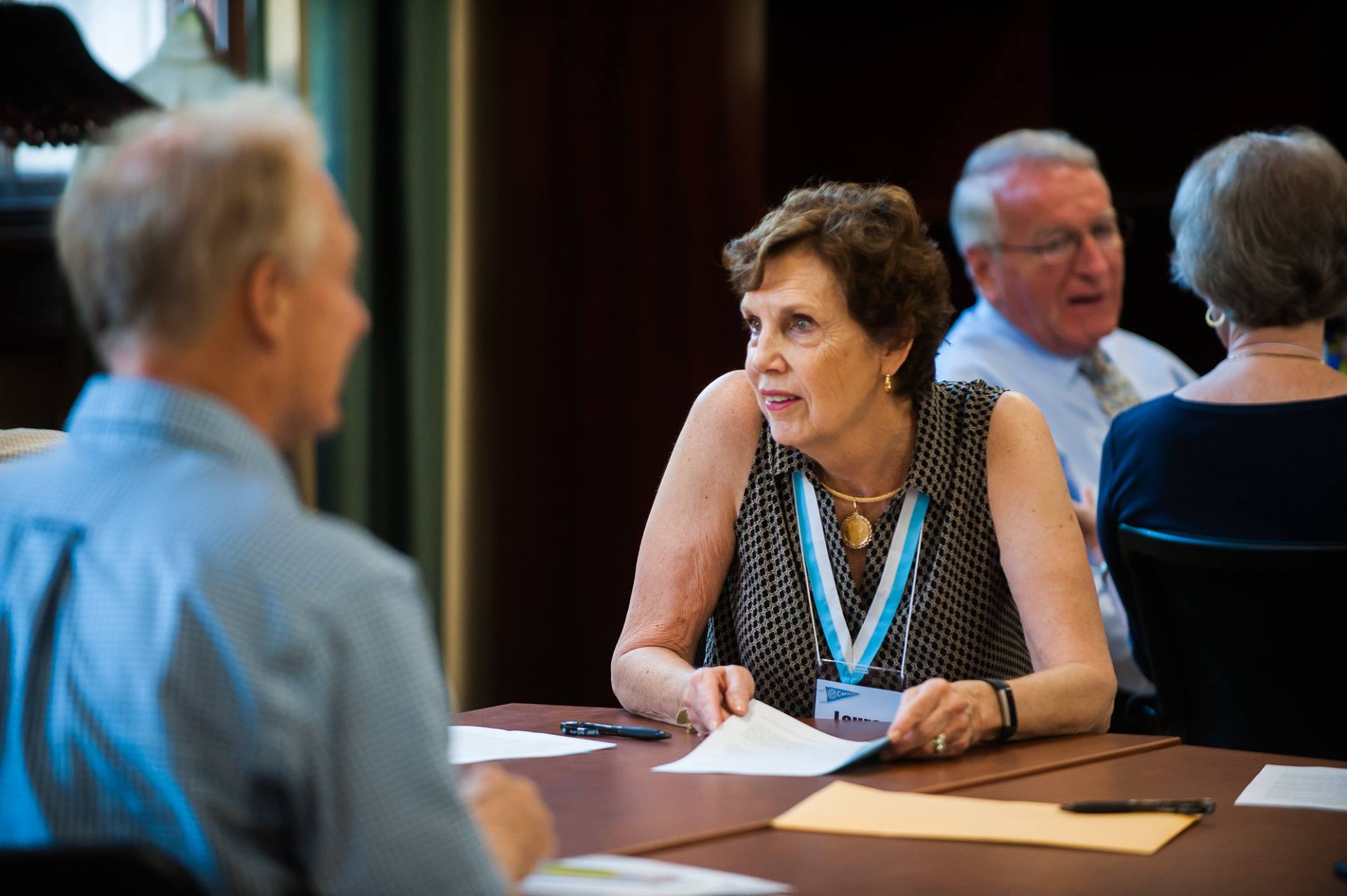 “Everyone is a historian,” Lloyd Kramer told members of the class of 1968 gathered around eight large tables in Wilson Library on Friday morning.

“You are the ’60s,” said Kramer, a history professor and director of Carolina Public Humanities.

The Gulf of Tonkin confrontation took place in 1966, escalating U.S. involvement in the Vietnam War. The Voting Rights Act passed in 1965, opening the polls to people of color. The National Organization for Women formed in 1966. Then 1967 brought the Summer of Love. And protestors in 1968 defaced Silent Sam with red paint.

George Tennille ’68 (’73 MBA), Alan Kleinmaier ’68 and Mal Watlington ’68 (’69 MPA) grew up together in Kinston, entered Carolina together and joined the same fraternity, Alpha Tau Omega. Then they scattered to live their lives. They hadn’t come back to a class reunion until their 45th, five years earlier. They renewed their catching up before the start of the “Tradition, Transition and Tumult” seminar on the first day of reunions weekend.

“I don’t remember it being tumultuous when I was in school,” Tennille said.

“We were fraternity brothers,” Kleinmaier said, “and our fraternity did not protest.”

“We didn’t even know you could protest,” Tennille added. “That was a yankee thing, wasn’t it?”

But campus had changed by the time Watlington came back  in 1969 and began working on his master’s in public administration. He said that after the shootings at Kent State the following year, “this place had turned completely upside down from what it had been.”

He helped organize a student strike, trying to make a responsible statement about what was going on. He ended up publishing an article about what happened during that period. “To say I’m a writer is a stretch,” he said. “Let’s put it this way: I know how to type.”

Paul “Skip” Crayton Jr. ’68 of Trent Woods had his life all planned out when he arrived at Carolina as a freshman. “I wanted to go to law school and come back and be part of my family’s business that had nothing to do with law,” he said.

But all of a sudden, a war came up, and he had to put those plans on hold. “You either got drafted and went to Vietnam and got shot at and didn’t come back, or you found a military service where that might not happen,” Crayton said.

Once again, he made plans. He chose the Navy, expecting to be a fighter pilot, but he couldn’t pass the vision test. “They don’t want you to land on a carrier if you can’t see good,” he said.

He later was accepted to law school, but by that point he had married, he said, and law school didn’t seem that important.  “My time at Carolina was still the best four years of my life.” 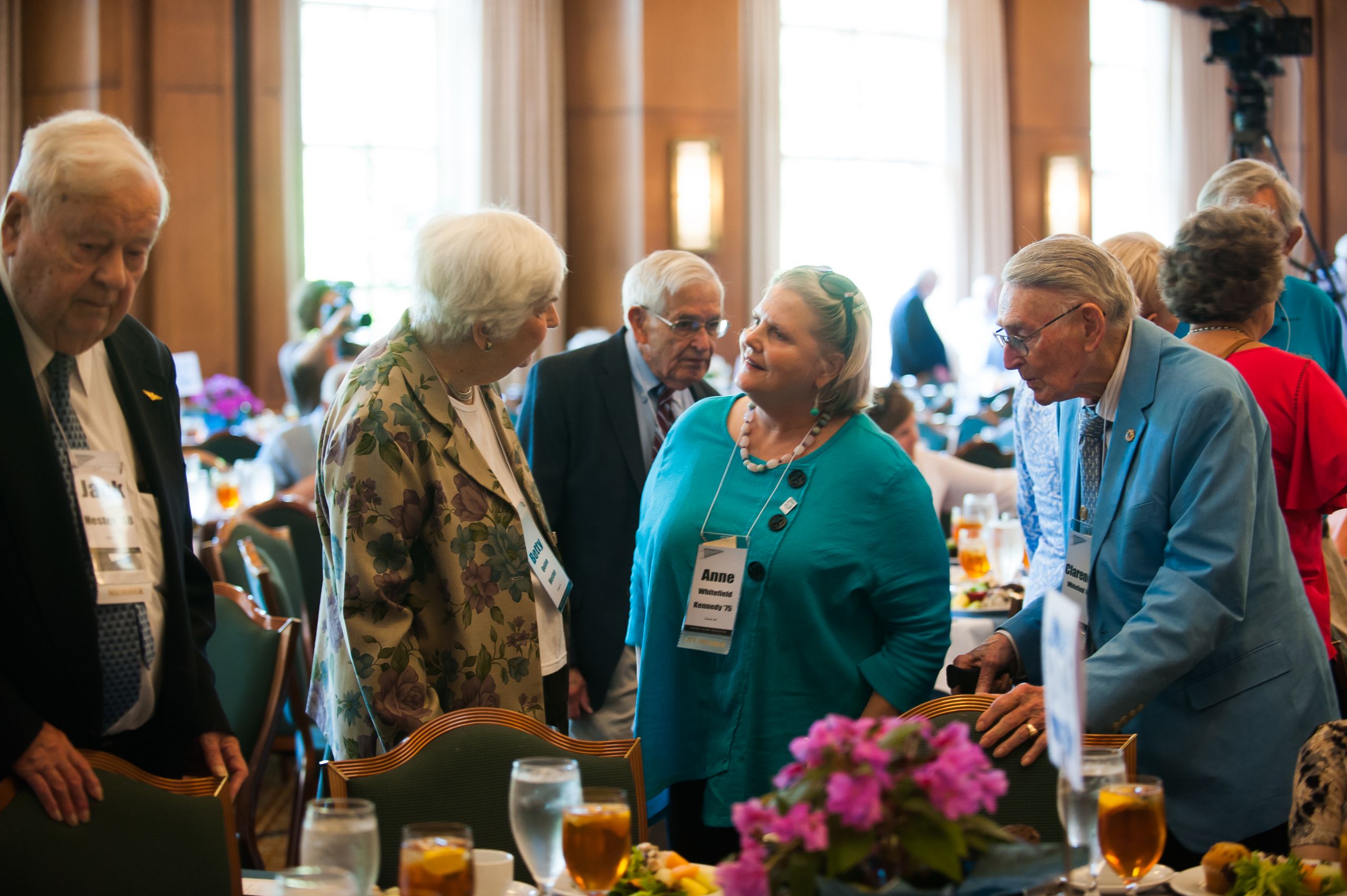 Toby and Cecilia Holding of Raleigh, both members of the class of 1949, this year made it to the front row of tables, where members of the more senior class years sit at the annual free luncheon, endowed by James Lee Love (class of 1884), for all alumni who have reached or passed the 50th anniversary of their graduation. The pair had gone to high school and college together, but hadn’t dated.

Then one day, not long after graduation, Toby was offered a job as a chemist in a gas and oil lab. He turned it down, but ran into Cecelia on the street and suggested she apply for it. Both had been chemistry majors, after all.

Cecelia got the job, and they ended up working in buildings next door to one another. So they went to lunch. “And look what happened,” Toby said. “We’ve been married 66 years.

“That was a good lunch.”

The transition from high school to college was made all the easier for J. Warren Mengel ’42 of Chapel Hill because he had some of the same teachers in both places.

The transition after college was much harder. World War II had begun, and he went directly into the military.  “That was a different experience,” he said. “I hadn’t been in any war before.”

Robert Little ’68 had his most formative experiences from just showing up at Carolina — a teenager from a small Southern town, living away from home for the first time, being exposed to the free-speech movement, women’s rights and the Vietnam War.

“It opened my eyes up to other things,” said Little, who after he was a student stayed around in Chapel Hill as editor of an underground newspaper, draft counselor and war protester. “My upbringing was to be open in everything. So I did. I became more aware of things. I developed strong opinions of things, which I still have today.”

Though several issues that he woke to when he was on campus have re-emerged in a different form today, he doesn’t do much protesting now. “I got into the unfortunate thing called ‘work,’ ” he said. “That restricts my involvement. When I retire, there are so many things on campus that I’d like to take part in, lectures and classes you can audit.

“Who has time to do things on weekends? I’m in retail.”

E.T. Malone Jr. ’65 (’75 MA) of Warrenton shared a Carolina experience with one of his forebears: The first person in his family to attend UNC was Nicholas Long, in 1795, in the very first class. He wrote a letter to his parents: Please send money.

“That set a precedent,” Malone said.

So did Long’s thirst for knowledge.

“Carolina was this beacon,” Malone said. “The small town I lived in was not much different from most small towns. It was conservative, not a lot to do, people thought about their work. No one was interested in art or talked about books.

“I didn’t want to do anything wild, but I wanted to find some kindred spirits. When I got here, I did. I loved every course I took. I wanted to major in 20 different things. And it was the University of the People. It didn’t cost a million dollars to come here. 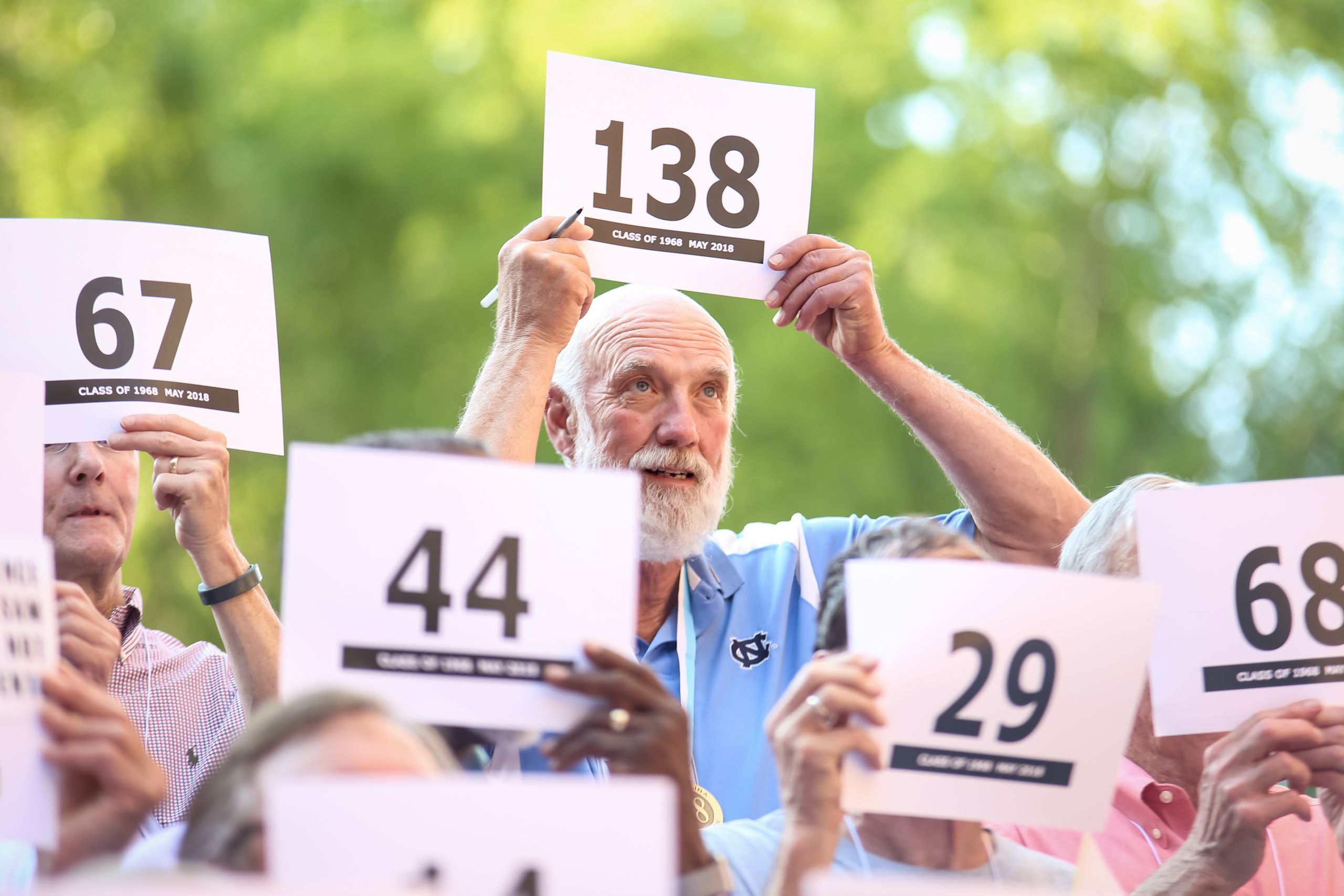 Janet Sawyer Taylor ’68 of Charlotte had not been back to campus since her 10th reunion. She returned for her 50th not only because it is a milestone, but “you realize from here on out, the class will start shrinking.”

She has been aware of the importance of time spent with friends since shortly after graduating.

“So many of our friends went over to Vietnam and were killed within a year of graduation,” she said. “There were a lot of things that made us ponder the future.” 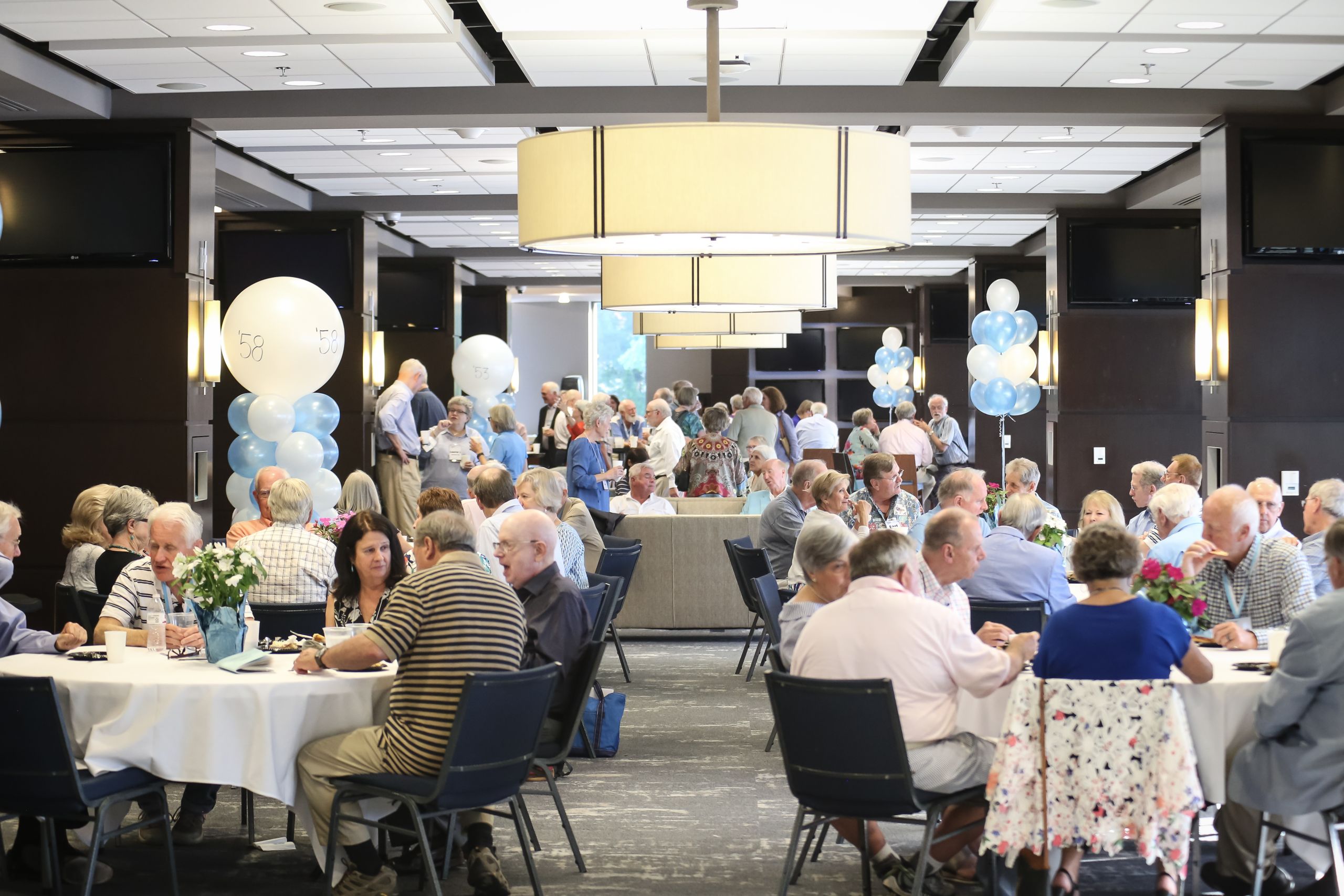 Louise Barrett Derr ’63 (’72 MEd), now of Waxhaw, entered Carolina in 1959 as one of only a few freshmen women who were not in the medical or pharmacy fields. “In some ways, it was kind of scary, because, where were the other girls?” she said.

As a student whose family already lived in Chapel Hill, she commuted from home, driving her father’s old World War II jeep and parking it at the stadium. Not rooming at a dorm added a layer of difficulty to interacting with other students. But it didn’t make it impossible.

“Within a few months, I started dating a guy and ended up marrying him as soon as I graduated.”

Being a Morehead Scholar shaped the experience of V. Scott Peterson ’68 (’72 JD) of Pisgah Forest.

“The only two rules you had was, stay in school — you don’t have to make all A’s and B’s — and stay single,” he recalled. “The Morehead people thought if you get married it would distract you.”

But he married his wife, Carolyn, the summer before his senior year.

“I never looked back on that,” he said. “I thank God for that woman every day.”

While some students demonstrated against the Vietnam War, Phil Prasse ’68 of Lynchburg, Va., joined ROTC. He had to wear his Air Force uniform all the time, except when he was in regular classes. It was as if he lived a dual life.

“When I wore my uniform, I symbolized something some people on campus didn’t like,” he said. Sometimes he avoided going to spots on campus popular with his classmates. “I didn’t know whether other people on campus were for me or against me.”

ROTC could be grueling, but the program built in some relaxation, he recalled, including a memorable social trip to Miami Beach, Fla., with the women from the Angel Flight auxiliary. Julia Knott Prasse ’68, then a nursing student, met Phil on that trip. He invited her for a walk on the beach, under a full moon.

“It was so romantic,” Julia said. “I came back from the trip and announced to everybody, ‘I’ve just met my husband.’ ”

The two married a year later.