Students Excavate Davie’s Home; No Evidence of Burning by Soldiers 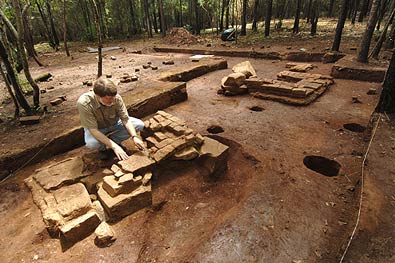 UNC students and faculty are excavating Tivoli, the home of William R. Davie, as the University marks the 250th anniversary of Davie’s birth on June 22. (Photo by Nancy P

Artifacts suggest that the South Carolina site that UNC archaeology students and faculty have been excavating was indeed the home of UNC founder William R. Davie, but they contradict the local lore that Union troops burned the house in 1865.

The discovery coincides with the 250th anniversary of Davie’s birth on June 22, 1756. An exhibit honoring the “father” of the University is one of several UNC events commemorating his birth. Nearly 50 artifacts, books, images and documents relating to Davie are on display through June 30 in the N.C. Collection at Wilson Library. The excavation, which is part of annual field studies for students, also is part of the University’s observance.

The excavation uncovered parts of the foundation, which the researchers used to determine the dimensions of the house. “It was 40 feet wide, and from chimney to chimney, about 45 feet long. For the early 1800s, that’s a pretty big house,” said R.P. Stephen Davis, associate director of the University’s Research Labs of Archaeology and an adjunct professor of anthropology in UNC’s College of Arts and Sciences.

“Those house dimensions, in combination with the artifacts that we found there – some very expensive table wares, for instance – lead us to confidently assert that it is William R. Davie’s home,” said Brett Riggs, staff archaeologist in the Research Labs of Archaeology, also in the College of Arts and Sciences. Remnants of table wares found at the site include Chinese export porcelain and English porcelain with painted decorations.

But the researchers and their undergraduate collaborators did not find the key evidence that would suggest a fire. “We would expect masses of charcoal and burned window glass, and we just didn’t encounter that,” Riggs said. “It’s possible that such evidence was obliterated, but we really doubt it.”

The house, known as “Tivoli,” may have been abandoned a few years after Davie died in 1820, as his daughters married and his youngest son built his own house nearby.

“We didn’t find any evidence to suggest that the house was occupied later than about 1830,” Davis said. “We know from Davie’s will that the property, including the house, went to his youngest son, Frederick William. By 1828, he had built his own house several miles away from Davie’s house.”

None of the materials found around the house postdate Davie’s death. “I imagine the family was loathe to have someone who was not family living in the house,” Riggs said.

Other interesting finds – both at the site of Davie’s house and of the slave quarters – were full of fragments of Catawba Indian ceramics. “We anticipated some Catawba ceramics, because the Catawba were engaged in commercial trade of these wares. But we didn’t expect it would be on such a scale,” Riggs said.

“Because this site is so close to the Catawbas’ home town – it’s only eight miles away – I think that we can infer that we’re seeing direct contact in which Catawba potters were coming to Tivoli and selling their wares,” Riggs said.

“Davie was also associated with the Catawbas during the American Revolution, when the warriors of the Catawba Nation who were enlisted as soldiers in the American army were periodically under Davie’s command. So he knew all these people, and he knew them quite well,” Riggs said.

The team conducted the excavation as part of the Research Labs’ and anthropology department’s summer field school, which teaches and trains undergraduate students in archaeological methods. The initiative is one of many at Carolina that provide hands-on research opportunities to undergraduate students.

Two years ago, student and faculty researchers homed in on this site from a list of five possible candidates, using a letter from Davie and other historical documents.

The Tivoli site is on property that is managed and protected by the S.C. Department of Natural Resources.

The researchers will clean and catalog artifacts and write the final research report over the next year or so. After the report is complete, all artifacts will be transferred to the S.C. Institute of Archaeology and Anthropology at the University of South Carolina.

The excavation effort received support from the UNC Summer School, from Duke Energy through a grant to the Catawba Valley Land Trust, and from Winthrop University.