The Orange County health director is concerned about the potential spread of the COVID-19 virus as students, faculty and staff return to the Chapel Hill campus, and she has urged the University to move to...

The COVID-19 pandemic “continues to pose a substantial and indeterminate threat to the financial health and sustainability” of the University, UNC officials have reported to the state system that oversees it. “The University faces significant...

When COVID-19 began to show its true virulence in the U.S., Catya McMullen ’11 and others in the performing arts scene in New York rued that they weren’t first responders. “We felt useless,” McMullen said....

UNC Study of Virus in Airways Points to Importance of Masks 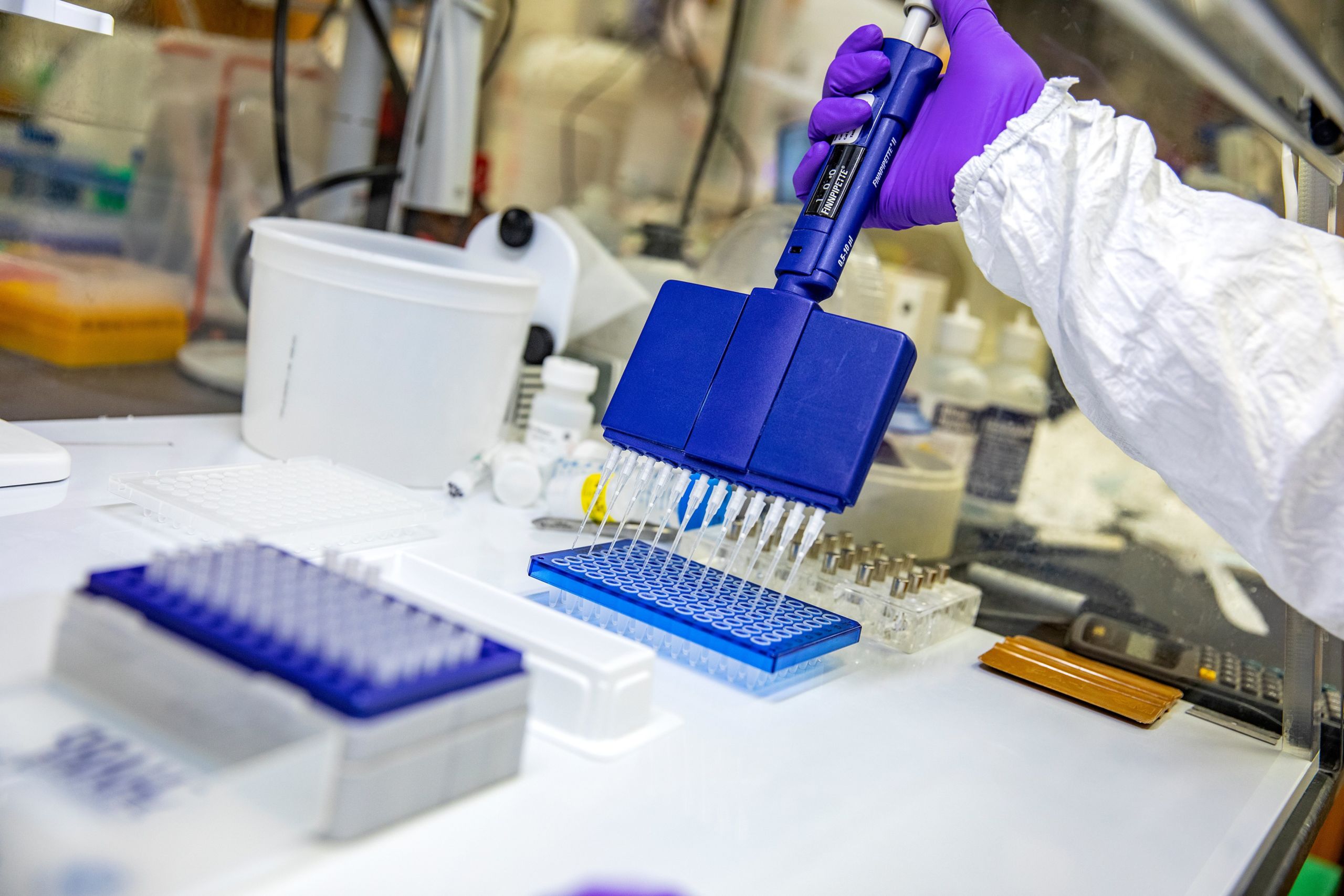 In their study, the UNC team sought to better understand a number of things about the virus, including which cells in the airway it infects and how it gets into the lungs in the patients who develop pneumonia. (File photo)

A major study of novel coronavirus infection in human airways adds to evidence that wearing a mask is an important step toward limiting transmission of COVID-19.

In a scientific article published in the journal Cell, scientists at UNC’s Gillings School of Global Public Health and the UNC School of Medicine have characterized the specific ways in which SARS-CoV-2 — the coronavirus that causes COVID-19 — infects the nasal cavity to a great degree by replicating specific cell types and how it infects and replicates progressively less well in cells lower down the respiratory tract, including in the lungs.

The findings suggest the virus tends to become firmly established first in the nasal cavity. Then, in some cases, the virus is aspirated into the lungs, where it may cause more serious disease, including potentially fatal pneumonia.

“If the nose is the dominant initial site from which lung infections are seeded, then the widespread use of masks to protect the nasal passages — as well as any therapeutic strategies that reduce virus in the nose, such as nasal irrigation or antiviral nasal sprays — could be beneficial,” said study co-senior author Dr. Richard Boucher, the James C. Moeser Eminent Distinguished Professor of medicine and director of the Marsico Lung Institute at the medical school.

The other co-senior author of the study was Ralph Baric, the William R. Kenan Distinguished Professor of epidemiology at the Gillings school.

“This is a landmark study that reveals new and unexpected insights into the mechanisms that regulate disease progression and severity following SARS-CoV-2 infection,” said Baric, who also holds a microbiology and immunology faculty appointment at the medical school. “In addition, we describe a new reverse genetic platform for SARS-CoV-2, which allows us to produce key indicator viruses that will support national vaccine efforts designed to control the spread and severity of this terrible disease.”

In their study, the UNC team sought to better understand a number of things about the virus, including which cells in the airway it infects and how it gets into the lungs in the patients who develop pneumonia.

Other experiments in the study focused on TMPRSS2 and furin, two protein-cleaving enzymes found in many human cells. It’s thought that SARS-CoV-2 uses those two enzymes to reshape key virus proteins and enter human cells. The experiments confirmed that when these human enzymes are more abundant, the novel coronavirus has an increased ability to infect cells and make copies of itself.

The researchers also found that the virus can infect airway-lining cells called epithelial cells and — to a limited extent — can infect the all-important “pneumocyte” lung cells that help transfer inhaled oxygen into the bloodstream. However, SARS-CoV-2 infects almost no other airway cells.

Intriguingly, the virus did not infect airway-lining cells called club cells, despite the fact that these cells express both ACE2 and TMPRSS2. Moreover, the same types of airway epithelial cells from different human donors, especially lower-airway epithelial cells, varied significantly in their susceptibility to infection. These findings suggest that there are undiscovered factors in airway cells that help determine the course of infection in unique individuals — a course known to vary widely from mild or no symptoms all the way to respiratory failure and death.

Additionally, the researchers mapped the sites of coronavirus infection in the lungs of several people who had died from COVID-19 and found that these sites exhibited a sort of patchiness and other characteristics consistent with the hypothesis that these sites had originated from infection higher in the airway.

The theory that aspiration of oral contents into the lung is a significant contributor to COVID-19 pneumonia is consistent with observations that people at higher risk for severe lung disease — the elderly, obese and diabetic — are generally more prone to aspiration, especially at night.

The team also found that previously described individual antibodies capable of neutralizing the original SARS coronavirus of 2002 and the MERS coronavirus, which has been spreading slowly in the Middle East since 2012, did not neutralize SARS-CoV-2. However, blood serum from two of five SARS 2002 patients showed a low-level — but significant — capability to neutralize SARS-CoV-2 infectivity in cultured cells. These data suggest that people who have been exposed to other coronaviruses may carry some other types of antibodies in their blood that provide at least partial protection against SARS-CoV-2.

“These results, using some novel and innovative methodology, open new directions for future studies on SARS-CoV-2 that may guide therapeutic development and practices for reducing transmission and severity of COVID-19,” said James Kiley, director of the Division of Lung Diseases at the National Heart, Lung and Blood Institute, part of the National Institutes of Health.

Baric, Boucher and colleagues note that their study, apart from its specific findings about SARS-CoV-2 infection in the airway, involved the development of key laboratory tools — including a version of SARS-CoV-2 reengineered to carry a fluorescent beacon — that should be useful in future investigations of the virus.