All in the Family: Family shows Virginia is indeed for Tar Heels 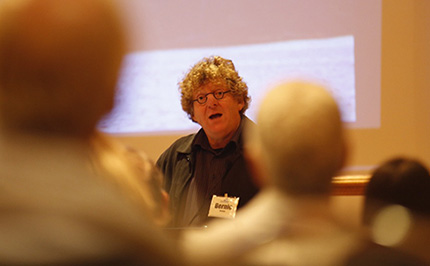 If there is any family in the Norfolk area that represents the GAA’s Virginia is for Tar Heels program, it’s the Avery family. Dr. Stanley Avery ’52, who also received a medical degree from UNC in 1961, and his son, Clark Avery ’99, attended the inaugural event in Norfolk on Monday night, and the duo represents a mere fraction of those in the Avery family with a degree from UNC.

Others include Stanley Avery’s three brothers; his father; his great-grandfather; his wife, Lee Ann Avery ’57; four of their five children (’83, ’86, ’89 and ’99); and Lee Ann Avery’s father. That brings the total to 12, and as Clark Avery noted, “that’s before we get into my cousins,” many of whom also attended Carolina.

The family’s Carolina ties are so strong that when Stanley Avery’s children were young, he drove them from Norfolk to Elizabeth City and rented a hotel room so they could watch football games on TV. Those, of course, don’t include the games they saw while sitting in the stands at Kenan Stadium. Over the years, the Avery family has become very familiar with the 200-mile trek from Norfolk to Chapel Hill. In any given year, some of the Averys go to Chapel Hill at least three or four times for football games alone. All in all, they estimate that over the years Stanley Avery has made the trip 150 times.

The elder Avery and his son were among about 70 people who attended Monday’s alumni event at the Norfolk Yacht and Country Club, which featured a talk by Bernard Herman, department chair and George B. Tindall Distinguished Professor of American studies and folklore. Herman’s stories about the history, culture and cuisine of Virginia’s Eastern Shore were so popular at an earlier alumni event in Norfolk that he was back by popular demand.

Herman, who has been visiting the Eastern Shore since the early 1950s, described many of the region’s traditional dishes, including clam fritters, that deserve a place on the culinary map. He also posed both serious and humorous questions that get at the region’s dual offerings — a rich history, culture and cuisine coupled with extreme poverty. Northampton County, he said, is the poorest in the state.

“How is a place that is between Baltimore, Philadelphia, Washington, D.C., Norfolk and Virginia Beach and Richmond so rich in terms of what it can produce and so poor in the ways people find themselves now?”

“People,” he noted, “are passionate about this.”

In response to a question from the audience, Herman also provided his recommendations on things to do and places to go on the Eastern Shore. They include the Bayford Oyster House (especially around 5 p.m. on a Friday), the Exmore Diner, the Barrier Islands Center and the hiking trails at Wise Point.

The Monday event was the first of five slated this week to celebrate Tar Heel pride in Virginia, which has the largest number of UNC alumni outside of North Carolina. Other gatherings are scheduled throughout the week in Roanoke, Richmond, Alexandria and Charlottesville, each featuring different UNC speakers.