Class of ’57 Reunion Has That Winning Feeling 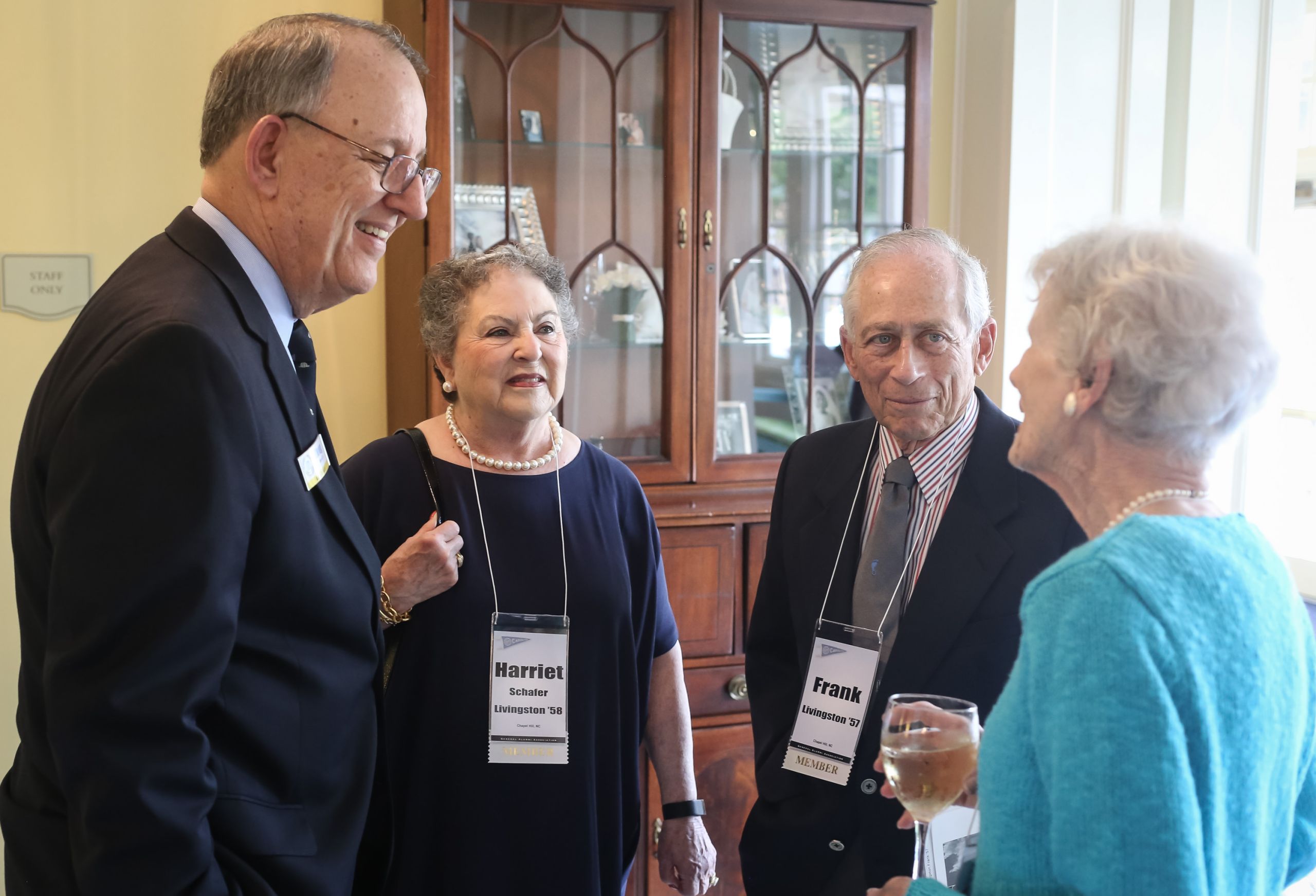 Frank Livingston ’57 and his wife, Harriet Schafer Livingston ’58, chat with GAA President Doug Dibbert ’70 and another guest at the class of ’57 reunion. The Livingstons met as students at Carolina. (Photo by Ray Black III)

When members of the class of 1957 gathered for dinner at The Carolina Inn on Thursday evening, it was to mark the 60th anniversary of their graduation.

But there was another anniversary tied to this class that infused the festivities, the 60th anniversary of Carolina’s first NCAA men’s basketball championship. And this reunion came in a year when the team brought the trophy back to Chapel Hill yet again.

Lennie Rosenbluth ’57, one of the starting five on the team that didn’t lose a game the entire season, knows exactly how the 2017 team feels. 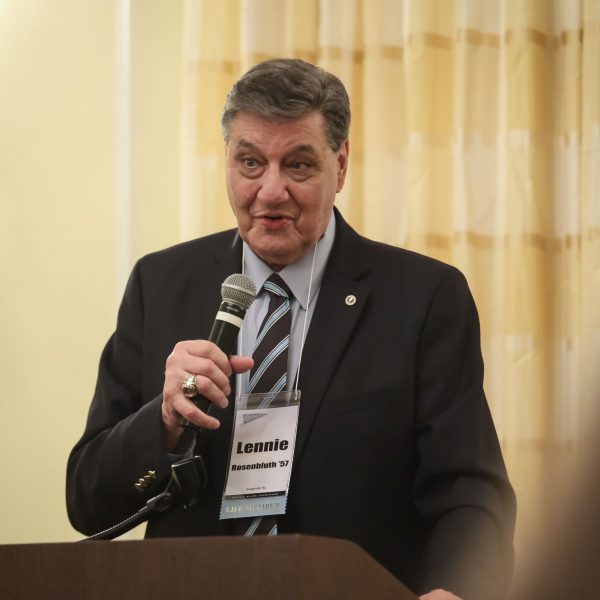 “They were a lot like us,” he said. “They refused to give up. That is the most important thing. And they played together as a team.”

Rosenbluth said he hopes the 2017 team will resemble the 1957 team in on one other important way: staying connected with each other over the years. “We became more than teammates; we became brothers,” he said. “It’s been 60 years, and we still call each other and stay in touch. That’s more important than the memories.”

Tom Lambeth ’57 said that long before longtime “voice of the Tar Heels” Woody Durham ’63 exhorted fans listening to games on the radio to “go where you go and do what you do” to ensure a Carolina victory, people held to their own superstitions. He recalled that his father, M. Thomas Lambeth ’26, would walk outside during critical moments and stand for a minute at the exact same spot on the driveway before returning to the game on the radio. Coach Frank McGuire’s wife was said to wear the same blouse to every game that undefeated season.

The class of ’57 Carolina experience goes beyond winning national titles.

Sitting in the elegant dining room at the Inn, Rea Hinson Jr. ’57 had come full circle.

When he came to UNC in the fall of 1953, he made ends meet by working here, polishing floors, washing dishes and waiting tables. Thursday evening, young waiters served him and about two dozen classmates, many of them with Carolina spouses, having returned for reunion weekend from California to Delaware, Virginia to South Carolina, as well as some who have spent their entire lives in the Old North State.

There were stories about how, like Rosenbluth and his teammates, other alumni had seen their Carolina experiences shape their lives after college.

For Hinson, of Pittsboro, that first job as a student proved fortuitous. He’d been rushed by Kappa Alpha Order but wasn’t in a financial position to join, so he worked as the fraternity’s houseboy and eventually became a KA brother. One day his roommate ran into a girl on Franklin Street he knew from back home who was enrolled in summer school at Chapel Hill, and he brought her back to the fraternity house.

“It was like being hit by a lightning bolt,” Hinson said. Six weeks later, he asked her to marry him. Sandra Dyer said yes, and 60-plus years later, she sat beside him at the reunion dinner.

Milton Cooke ’57 of Chapel Hill took a detour in his Carolina career, dropping out in 1955 due to not enough money and too much bridge taking a toll on his grades. But he stayed in touch with his class, even serving on the steering committee of his 50th reunion, and eventually completed his degree at UNC in 2006. “They can’t get rid of me,” he said.

Carolina launched Jewel Buffaloe Christian ’57 of Raleigh on a career in education. She stayed on for her graduate degree, then taught for 30 years in the Triangle, “when the Triangle was still new,” she said.

Shirley Pierce Spears ’57 of Greensboro came to Chapel Hill from what is now UNC-Wilmington with the intention of going to law school. She got married instead, but both of her children got their law degrees after graduating from Carolina. Her return to Chapel Hill this weekend marked her first trip back for a reunion.

“I just decided maybe it was my last opportunity,” she said.

Likewise, Frank Livingston ’57 of Chapel Hill takes nothing for granted. He met Harriet Schafer Livingston ’58 while they both were students at Carolina. Several years ago, they returned to Chapel Hill for Harriet to have life-saving surgery. “So Carolina brought us together,” Livingston said, “and Carolina kept us together.”

Grady Putnam Jr. ’57 of Millsboro, Del., comes back to reunions frequently to see what’s going on around campus and to catch up with old friends. He and many in his class came to UNC from out of state, which seems harder now, he said, judging by the anxiety his grandson felt before being admitted to the class of 2021.

“Carolina gave me a huge background to be successful in whatever I wanted to do,” Putnam said. “I loved the place, and I still do.”