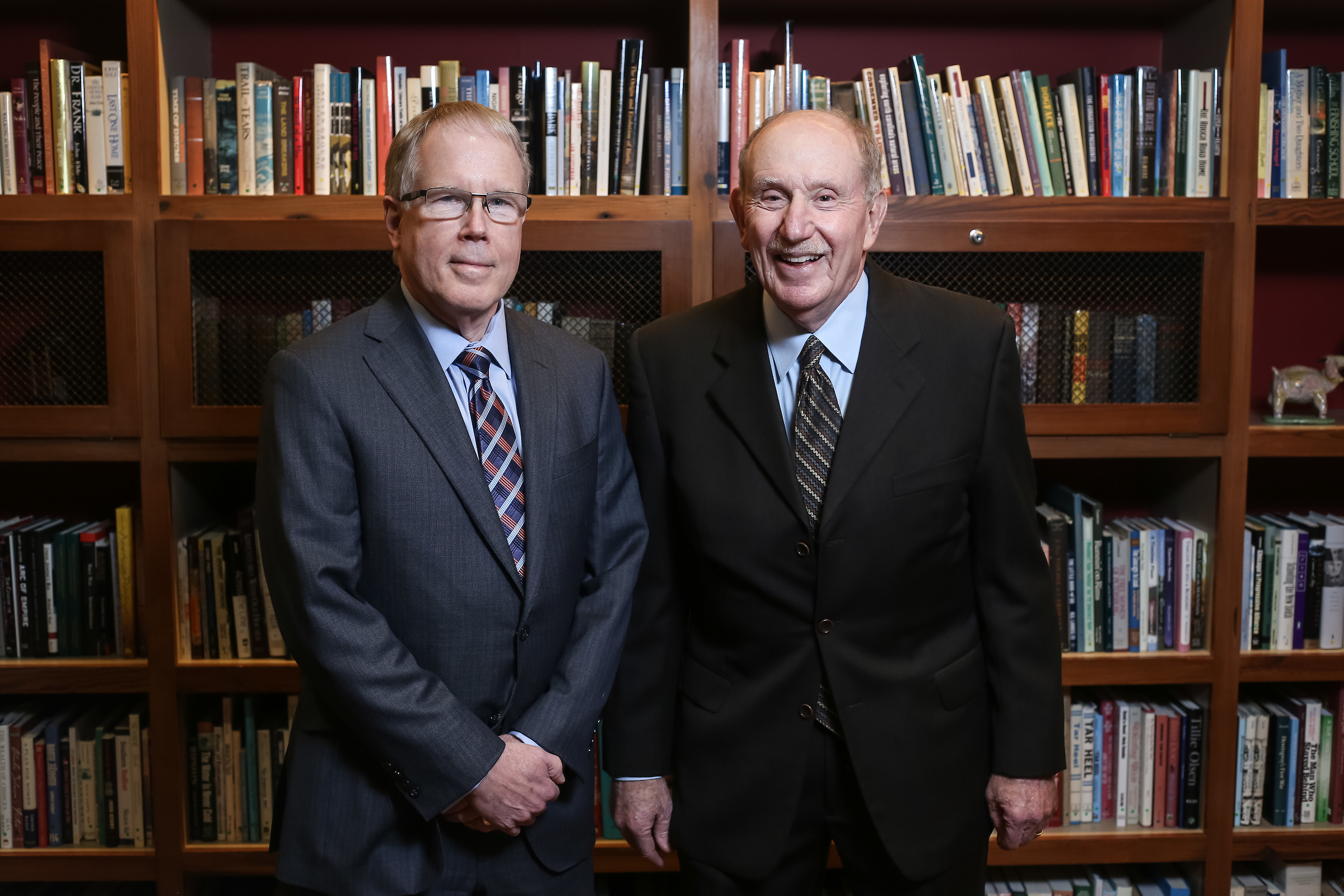 A former law school dean who served as mayor of Chapel Hill and a history professor who directs UNC’s honors program were recognized Friday with the GAA’s Faculty Service Award.

The GAA Board of Directors presented the award to former dean Kenneth Broun and professor James Leloudis ’77 (’89 PhD). Established in 1990, the award honors faculty members who have performed outstanding service for the University or the association.

Broun earned undergraduate and law degrees from the University of Illinois at Urbana-Champaign before coming to the UNC School of Law in 1968 as a visiting assistant professor and joining the faculty full time in 1969. He was dean from 1979 to 1987 and during his tenure further diversified the faculty by adding more female professors. He retired in 2011 as Henry Brandis Professor of law emeritus. Among his broader University service, he was on the chancellor search committees that led to the hiring of Holden Thorp ’86 and Carol L. Folt.

Broun co-founded the National Institute for Trial Advocacy, which taught law students practical skills through exercises in cross examination, direct examination, jury selection and closing arguments, and UNC became one of the first law schools to incorporate such training into its curriculum. He established a clinical law program that enabled students to practice their craft with clients who otherwise would not be able to afford a lawyer.

He put the school on the international map by taking Carolina law students to London to participate in moot court competitions with barristers-in-training in the United Kingdom and still makes the annual visit with students, writing questions for the arguments, serving as judge and giving talks. Broun also began sharing his expertise in South Africa in the 1980s, during the apartheid era. For more than 25 years, he led annual sessions that taught black lawyers the same courtroom skills their white counterparts had.

Broun served as mayor of Chapel Hill from 1991 to 1995 and has been a town-gown broker on such issues as the future use for the nearly 1,200 acres of the Horace Williams Airport and the Carolina North Forest parcels. He recently chaired a town task force to recognize the role African-American residents had in desegregating Chapel Hill.

Leloudis came to UNC as an undergraduate and left only to pursue his master’s degree at Northwestern University, returning to earn his doctorate and join the history faculty in 1989. Since then he has taken on many responsibilities in addition to teaching.

He is the Peter T. Grauer Associate Dean for the Honors Carolina program and the founding director of the James M. Johnston Center for Undergraduate Excellence. He serves on the Undergraduate Admissions Advisory Committee and oversees the Office of Distinguished Scholarships — including the Burch Fellows Program, the Winston House European Study Center and the Washington Seminar in Domestic and International Affairs. Leloudis co-chairs the chancellor’s task force on the University’s history.

His fundraising success has enabled the Honors Carolina program to double the number of students it accepts by endowing 15 new faculty positions. The donations also enabled the University to buy Winston House, which expanded the program to London. As the honors dean since 1999, Leloudis has increased the diversity of students accepted into the program and brought in Carolina Covenant Scholars.

His scholarly recognitions include the Engaged Scholarship Award from the Office of the Provost in 2011 and the North Caroliniana Society Book Award in 2010. Early in his career at Carolina, he was one of six scholars in the Southern Oral History Program who collaborated on an award-winning book, Like a Family: The Making of a Southern Cotton Mill World, and is known for nurturing collaboration across academic disciplines.

In addition to such scholarship and service to many other University committees and programs, Leloudis is a public historian, making presentations around North Carolina to higher education, state and local government officials, teachers, museums, foundations and many other public audiences on various aspects of the state’s history.