The Little Slide Show That Could

Historian Finis Dunaway ’93 tracked one man’s efforts to save Alaska’s Arctic National Wildlife Refuge and learned the power of trickle-up environmentalism. by Andrea Cooper Finis Dunaway ’93 had never crashed a memorial service before. He...

Have a Good Listen

The quality of public debate has become the debate. The Program in Public Discourse seeks to lower the temperature and raise democratic citizenship among students. by Eric Johnson ’08 Heading into her sophomore year at Carolina, Sinclair Holian has...

The Art is Formally Known as Prints

by Jason D. Smith ’94 Somebody forgot to tell Bob Goldstein that he couldn’t just do any old thing he wanted to. He couldn’t make a giant portrait of Mahatma Gandhi out of beer bottle caps...

Sticking to the Family Business 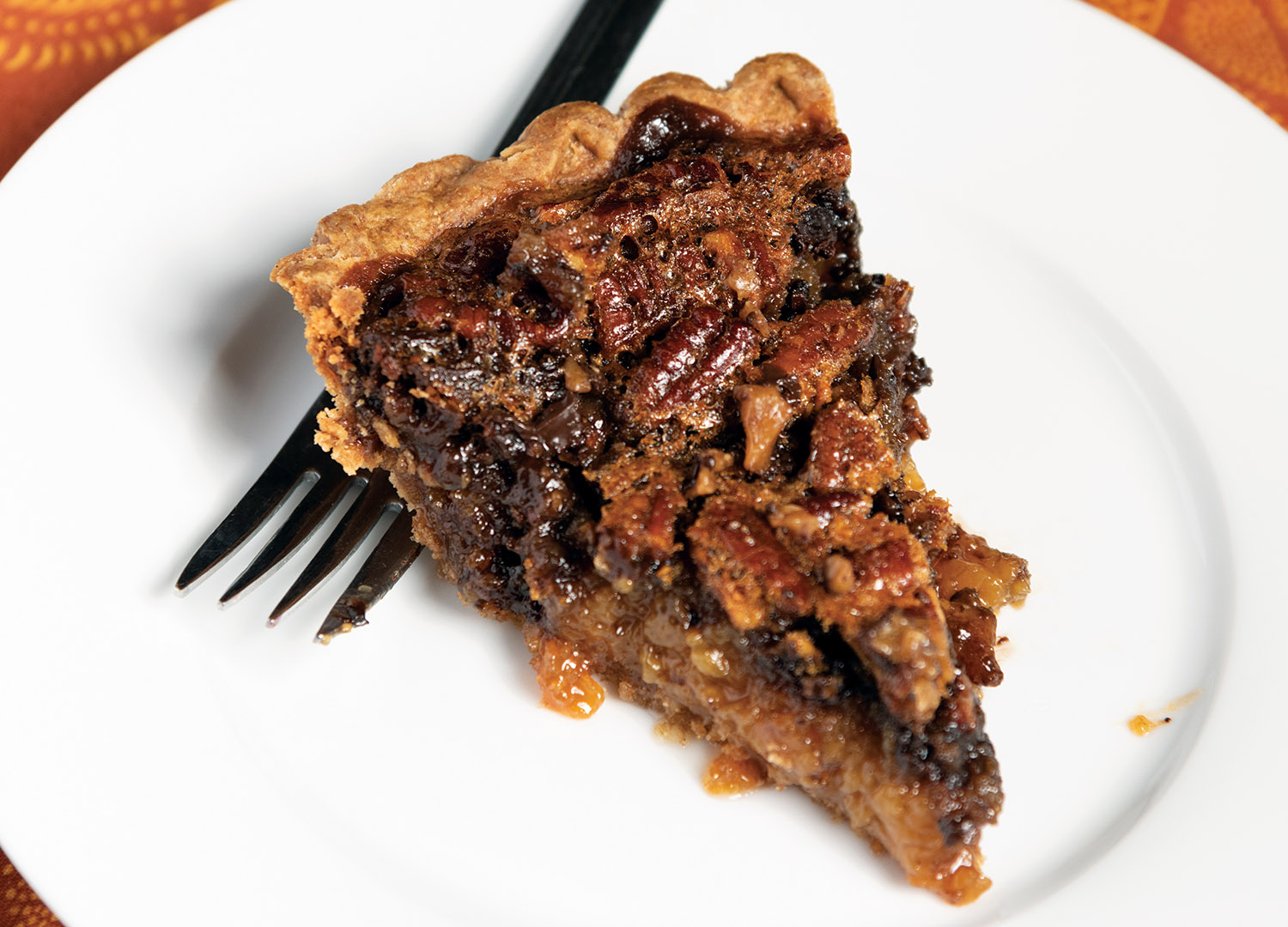 When Karen Graves ’74 was a kid, Heath bars — those thin slabs of buttery, brittle toffee coated in creamy milk chocolate — were her favorite candy.

As an adult, she started experimenting in her Chapel Hill kitchen with her own toffee recipes. Her signature version coated toffee with a more grown-up dark chocolate, and pecans replaced the traditional Heath almonds, giving it a distinctly Southern nuance.

For years, the confection was well-favored by a lucky few — family and friends. In 2006, Graves expanded its devotees vastly when she took it out of her kitchen and into stores. 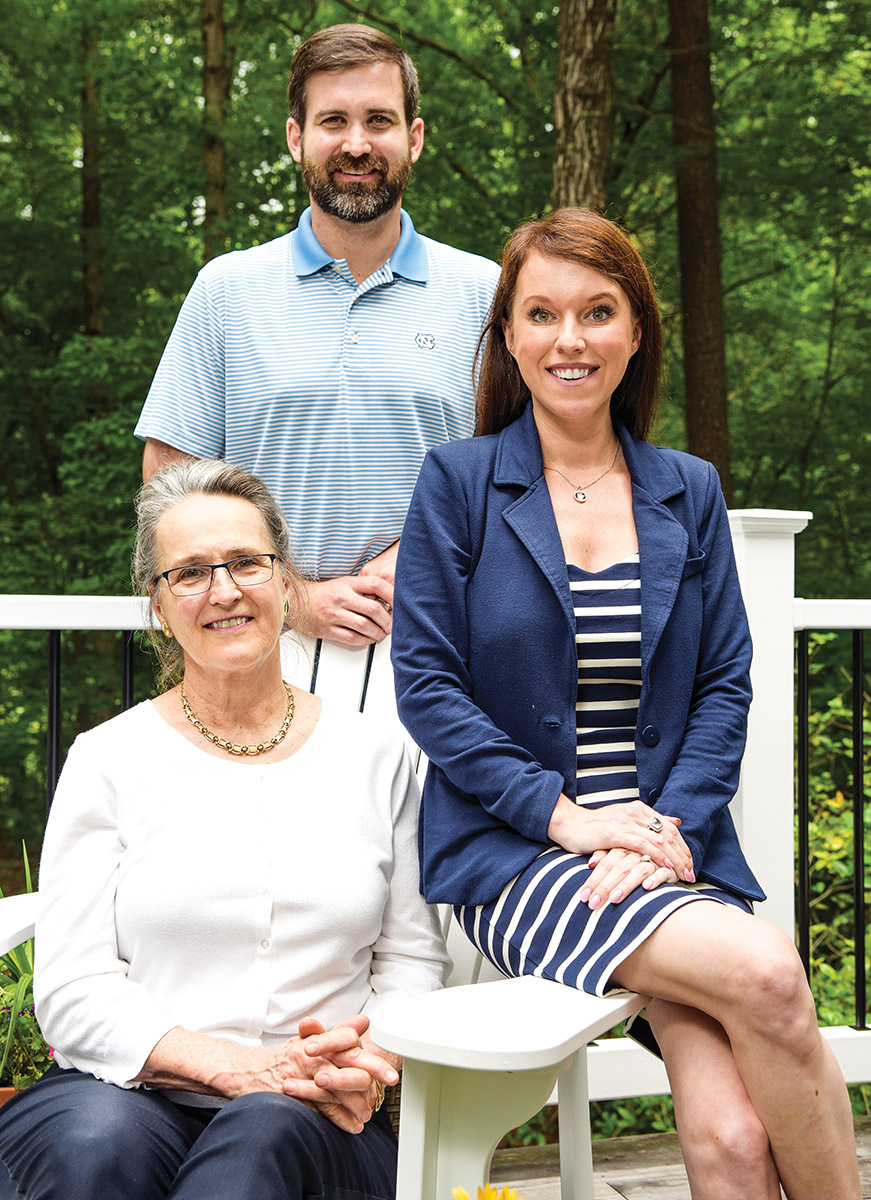 Karen Graves ’74, her son Mark ’03, his wife, Christy ’05 and another son, Scott, all work in the toffee business that made the leap from home kitchen to hundreds of stores. (Photo by Grant Halverson ’93)

After seeing an article about Southern Season — the well-known Chapel Hill-based purveyor of specialty foods — and its support of local companies, Graves made a batch and took it by. The candy buyer sampled it and placed an order on the spot. “I was so pleased,” she said. “But I also realized that the days of cooking toffee in a three-quart pan in my kitchen would soon be over.”

Chapel Hill Toffee was born, and its distinctive Carolina blue boxes — more elegant than a mere candy wrapper and perfectly configured for giving as gifts — were soon showing up in store displays.

A dozen years later, Chapel Hill Toffee is sold online and in more than 400 retail locations across the country. And the family treat has become a family business: Karen’s son, Mark ’03, his wife, Christy ’05, and Karen’s oldest son, Scott, have developed a brand that leverages their love of cooking with their connection to Chapel Hill.

“I would have been perfectly content with focusing on a local business,” Graves said. “But when Mark joined the company in 2008, he saw the potential of the business, and we’ve grown from there.” The company, now with six part-time employees, has long since moved from Graves’ kitchen to a commercial facility.

That growth helped protect the company when it faced a big challenge, also related to Southern Season. In 2016, the retailer filed for bankruptcy; at the time it owed Chapel Hill Toffee about $28,000. Christy Graves said that by then Southern Season was still an important customer, but “not the backbone of our company.”

“We continued to work with our other vendors to increase sales in other areas of the state to cover the loss we knew we’d be forced to take,” she said. And Southern Season was acquired by Calvert Retail, which led to more opportunity. “Seeing our sales at Southern Season continue to grow gave Calvert the confidence in us to bring Chapel Hill Toffee into eight more of their stores,” Christy said.

Even with the company’s growth, Mark, Scott and Karen still get their hands sticky every morning. Five days a week, Mark and Scott arrive at the kitchen around 7:30 to begin cooking the first batch of toffee of the day. Karen joins them at 8:00, and the other employees arrive at 8:45. They spend the day producing Chapel Hill Toffee or Griff’s Coffee Toffee, created in memory of Karen’s husband, W. Griffin Graves III ’72, who died in 2013. Christy works from home, balancing taking care of her two young boys and overseeing accounting, marketing plans and sales representatives in the field.

For a company that started in a home kitchen, the key ingredient remains family.

“We will always make Chapel Hill Toffee, but we are hoping to grow past the region with the new Griff’s Toffee, which focuses more on the story of our family rather than our hometown,” Karen said. They recently teamed with Carolina Brewery to introduce Chapel Hill Toffee Stout; a portion of the proceeds go to UNC’s Lineberger Comprehensive Cancer Center.

“The love of cooking rubbed off on both Mark and me growing up,” Christy said. “One of our favorite things to do as a family is to get into the kitchen and try to make new recipes and blend unique flavors. We hope to pass that love on to our two young sons.”

“The Chapel Hill Toffee Pecan Pie has been a huge hit,” said Christy Graves ’05. “It’s great for the holidays, but also for any potluck gathering throughout the year.”

▶  Roughly chop toffee with a sharp knife, or crush with rolling pin or rubber mallet. Reserve 2 tablespoons for pie topping.

▶  Mix in pecans and toffee pieces.

▶  Bake on oven’s center rack for 60 to 70 minutes or until interior temperature reaches 200 F and crust is golden brown.

▶  Cool for 2 to 3 hours to be sure that filling is set. Top with reserved toffee bits after 20 to 30 minutes.