Healing and unity were recurring themes during a Nov. 21 dedication in the Pit of...

Confronting Our Saunderses: Carolina and Disparate Visions of the Future

A seven-panel exhibit opened in the Carolina Hall front lobby in mid-November. (UNC photo by Jon Gardiner '98)
Posted on Nov. 16, 2016

There is something new to see on the campus. Two things, really — history lessons in white and black. A year and a half after a spring punctuated with the protests that students of color were not whole students of Carolina and the demand that everybody else face up to it — the University has set out in words and pictures an accounting of the regrettable events and turbulent politics that defined race relations in North Carolina in the 19th and early 20th centuries. 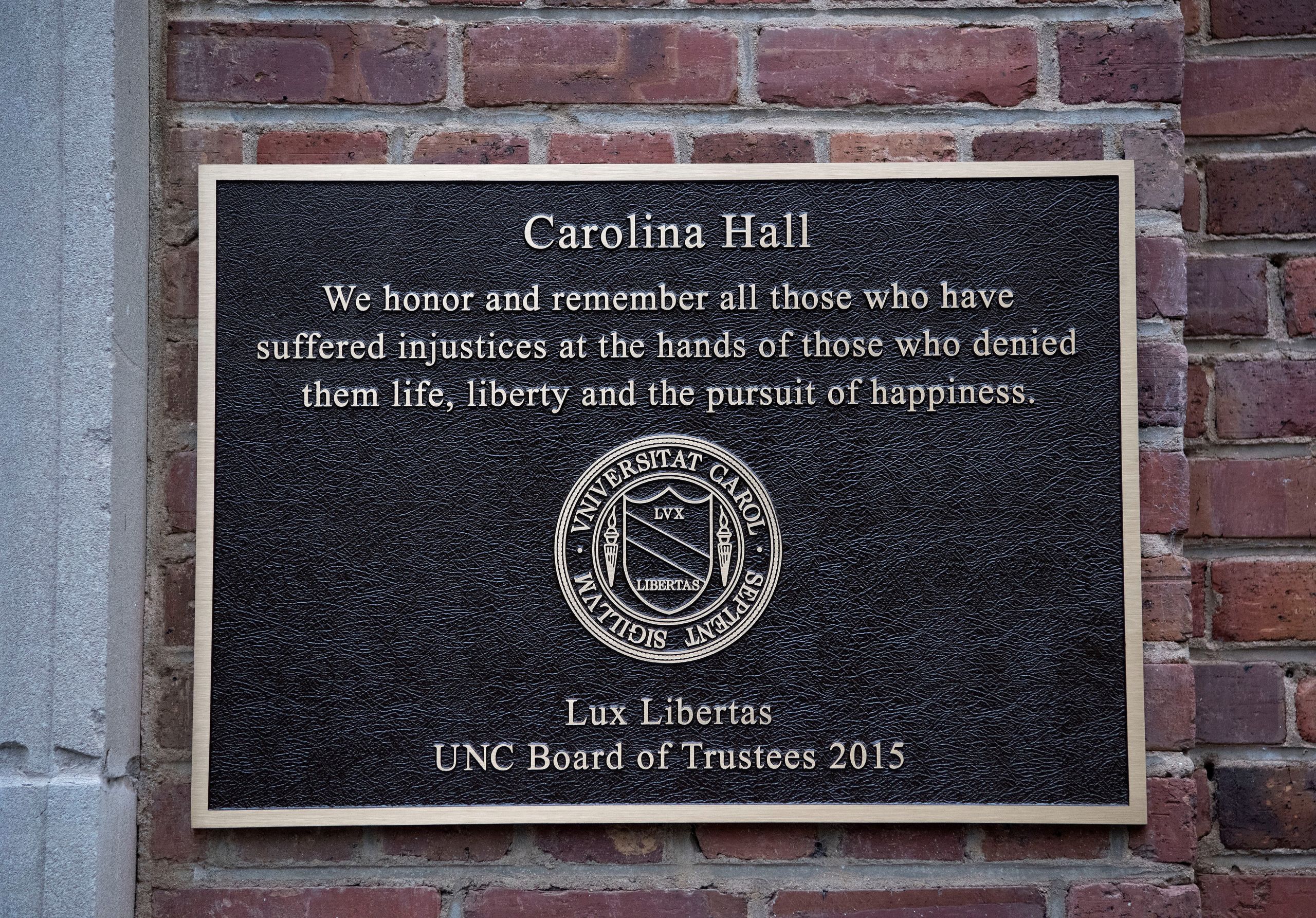 The setting is Carolina Hall, nee Saunders, after the Civil War soldier, historian and statesman. Some still doubt William Saunders really was the state’s leader of the Ku Klux Klan, but there is no question that the UNC trustees cited that line on his resume when they conferred the honor in 1922. That, the trustees of 2015 said, justified an unprecedented removal of his name, replaced with the generic.

As part of a promise from South Building to the students to publicly confront the University’s racial history, a seven-panel exhibit opened in the Carolina Hall front lobby in mid-November.

It takes up where the war over the subjugation of African-Americans ends, setting off a long period of turmoil, as an alliance of blacks, American Indians and some whites battled in the name of Fusionism for inclusiveness against white supremacists. By 1868, a victorious Republican Party rode in on a mandate for a statewide public school system and a new constitutional right of every man to vote.

Supremacists organized around the Democratic Party answered with terror in the form of Klan violence, voting fraud and the country’s only coup d’etat in Wilmington in 1898.

The story is told from the points of view of segregationists and those, including black leaders, who defied them. One of the former, Gov. Charles Brantley Aycock (class of 1880) — who may have escaped Saunders’ fate when the trustees imposed a moratorium on further name changes — gets his due as a champion of schooling but an avowed campaigner for the disenfranchisement of blacks. (Aycock’s name is on a UNC dorm; other universities have removed his name from their buildings.)

The exhibit traces the beginnings of the Jim Crow era of institutionalized racial segregation, then jumps ahead to the state’s official mea culpa for slavery in 2007 and the efforts of the modern-day students to shine lights on the events.

The last panel is laid over a photo of men removing the name Saunders Hall. It includes a nod to the students’ unsuccessful effort to have the building renamed for author and civil rights activist Zora Neale Hurston, who secretly attended a class at Carolina in 1940, long before blacks were allowed admission.

The task force that created the exhibit will turn its attention to concepts for public displays in McCorkle Place, where the Confederate statue Silent Sam stands guard nearby the Unsung Founders memorial; both are controversial — Silent Sam for existing, and the Unsung Founders memorial for seemingly minimizing the people and their effort it was designed to recognize. The University also is working on an inventory of buildings and monuments on the campus that have racial significance and on an online student orientation program on racial history.

The entire exhibit, which measures about 20 feet long and about five feet tall in the Carolina Hall lobby, can be viewed online at bit.ly/carolina-hall-exhibit.

‘They Carry a Heavy Burden’