(Editor’s Note: The GAA’s Distinguished Service Medal citations, such as this one, are read to the audience at the Annual Alumni Luncheon and then presented as a keepsake to the recipients.) Twenty-some years ago, the...

(Editor’s Note: The GAA’s Distinguished Service Medal citations, such as this one, are read to the audience at the Annual Alumni Luncheon and then presented as a keepsake to the recipients.) Patricia Timmons-Goodson ’76 (’79...

The General Alumni Association Board of Directors today presented its 2020 Distinguished Service Medals to three alumni. 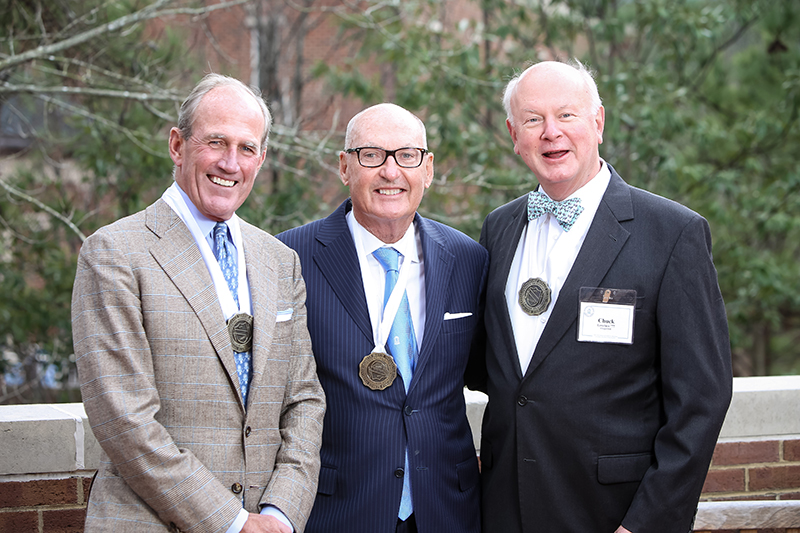 The recipients are James E. “Jim” Delany ’70, of Nashville, Tenn.; Charles E. “Chuck” Lovelace Jr. ’77, of Chapel Hill; and John L. Townsend III ’77, of Greenwich, Conn. The medals have been awarded since 1978 to alumni and others who have provided outstanding service to the GAA or the University.

The medals usually are presented at the Annual Alumni Luncheon in May during Spring Reunions and Commencement weekend. While the awards were announced in 2020, due to COVID-19 pandemic limits on gatherings and other safety precautions at the time, the presentation of the medals was rescheduled for a Jan. 14 luncheon at the board’s winter meeting.

Delany, who played basketball at Carolina, retired at the end of 2019 as commissioner of the Big 10 Conference, a position he had held since 1989. At UNC, Delany and his wife, Kitty, have been supporters of scholarships for Carolina Covenant, law school and other students. He has been a guest lecturer in the business, journalism and law schools. He received the Distinguished Alumni Award from UNC and from the School of Law, where he earned a degree in 1973. He served on the GAA Board of Directors for 10 years, including as chair in 2017–18.

Lovelace, who attended UNC as a Morehead Scholar and earned an MBA from UNC in 1979, retired in 2021 as executive director of the Morehead-Cain Foundation. He joined the foundation that oversees the merit-based scholarship program in 1984 as treasurer and assistant director, rising to director in 1987. During Lovelace’s tenure, the Cain Foundation contributed $100 million to the endowment for the scholarship program — established in 1945 to cover all expenses for four years of undergraduate study at UNC — doubling the number of students who could participate to about 70 with each incoming class.

Townsend, a retired investment banker, has served on UNC’s Board of Trustees and is chair of the University’s Investment Fund. He also has served on the Endowment Fund Board, as well as UNC’s fundraising campaigns and the boards of the Institute for the Arts and Humanities, and Ackland Art Museum, where he and his wife, Marree ’77, have made significant donations from their art collection. Townsend has taught classes at UNC’s Kenan-Flagler Business School, where he earned an MBA in 1982, and received the school’s Outstanding MBA Alumnus Award. In 2017, he received the William Richardson Davie Award, the highest honor from the trustees.