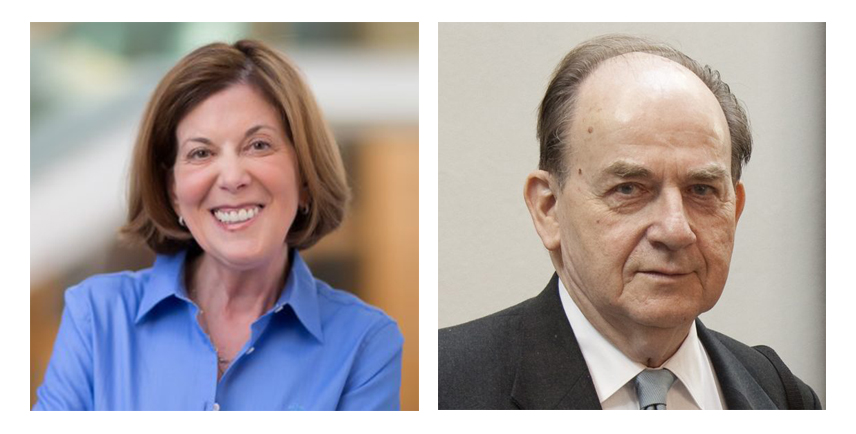 The dean of the Gillings School of Global Public Health and the former director of the Institute of Government were recognized Friday with the GAA’s Faculty Service Award.

The GAA Board of Directors presented the award to Barbara K. Rimer, dean of the public health school since 2005, and John L. Sanders ’50 (’54 JD), who retired in 1992 as leader of what is now the School of Government. Established in 1990, the award honors faculty members who have performed outstanding service for the University or the association.

Rimer joined the public health school in 1992 and since 2003 has been the Alumni Distinguished Professor for health behavior. She also is a senior research fellow at UNC’s Cecil G. Sheps Center for Health Services Research and deputy director for population sciences at the Lineberger Comprehensive Cancer Center. Her research pertains to cancer, evidence-based public health, health behavior, health communication and HPV vaccination.

Soon after becoming dean, Rimer secured the $50 million donation from the Gillings family that prompted the school’s renaming, bolstered its ability to invest in innovative public health projects and became a catalyst for attracting additional research funding. The school ranks No. 1 among public health schools in funding from the National Institutes of Health, and U.S. News & World Report ranks it No. 1 among public health schools at public universities in the U.S.

Rimer has received recognition for her research and leadership from the American Cancer Society, the U.S. Department of Health and Human Services, the National Institutes of Health and the National Cancer Institute, among other organizations. In 2008, Rimer was elected to the National Academy of Medicine, one of the highest achievements in her field. She was appointed chair of President Barack Obama’s Cancer Panel, and President Bill Clinton named her to the National Cancer Advisory Board. At UNC, she has been elected to the Order of the Golden Fleece and the Order of the Grail-Valkyries.

During her tenure as one of UNC’s longest-serving deans, Rimer has served on search and review committees for many of the University’s top administrators as well as on advisory panels for programs and academic units. Rimer has championed inclusivity and diversity among students and faculty, and Gov. Roy Cooper ’79 (’82 JD) appointed her to his Commission on Inclusivity.

Sanders became involved in government as student body president at UNC. After law school, a federal appeals court clerkship and private practice, he was recruited in 1956 to the Institute of Government by then-director Albert Coates (class of 1918), joining the faculty as a professor of public law and government.

In 1962, Sanders succeeded Coates at the institute, which besides its academic role serves as a nonpartisan resource to the state’s public officials. He developed expertise in state constitutional law, legislative representation and state government organization, and he was counsel to commissions that rewrote the N.C. Constitution and redesigned the state government’s structure.

As UNC embarked on a period of rapid growth and change, in 1973 then-UNC System President William C. Friday ’48 (LLB) tapped him to be vice president for planning. As student body president, Sanders had advocated for UNC’s earliest African American students to be fully integrated into campus activities. In the system post, he devised a desegregation plan to settle a lingering dispute between UNC and the U.S. Department of Health, Education and Welfare Department.

In 1979, Sanders returned as director of the institute. Among other duties, he chaired the Chancellor’s Committee on Buildings and Grounds, supervising the creation of a long-term plan for preserving the historic campus, protecting open spaces and guiding future construction. He retired as director in 1992 and from the faculty in 1994.

The home of the School of Government was renamed the Knapp-Sanders Building in his honor in 1998. He has received UNC’s Thomas Jefferson Award for faculty (1988) and C. Knox Massey Award for employees (1993), the UNC System Board of Governors’ University Award (1995), the Board of Trustees’ Davie Award (1997), the Distinguished Alumnus Award (1998) and the GAA’s Distinguished Service Medal (1992). He received an honorary doctor of law degree from the University in 2019.