Learning from the Past for a Better Future 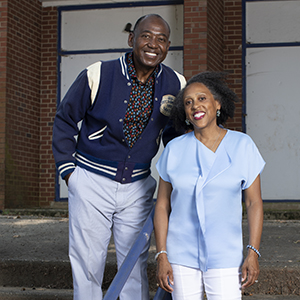 Although only a teenager when Dr. Martin Luther King Jr. was assassinated in 1968, Joseph High ’76 has been deeply influenced by Dr. King’s teachings of nonviolence and equality and his passion for service.

“Dr. King held that life’s most persistent and urgent question is: ‘What are you doing for others?’” said High. “He also maintained that even if we cannot do something great, we can do something small in a great way.”

And Joseph High and his wife, Kathleen ’78, have done just that – establishing an endowed scholarship through the UNC General Alumni Association’s Light on the Hill Society Scholarship to help reduce school debt for Black students who are descendants of persons from similar circumstances as Joseph.

High grew up in a segregated South. His early life was shaped by division and inequity, but also by those who believed in serving others in ways great and small.

“I saw Dr. King’s teachings practiced by some in my community, but also felt the lingering effects of Jim Crow,” he said. “We are all forever influenced by our life experiences, and I hope we have the will and strength to learn from each encounter and rise above divisiveness to become our best selves. Only then can we do something impactful for others.”

High, a proud Tar Heel, is eager to pay it forward by giving back to institutions that provided a strong foundation for his life and career.

“My wife and I are committed to serving more outstanding students from our local community by helping them succeed at UNC, an institution integral to our success,” he said. 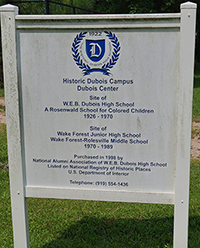 High attended W.E.B. DuBois School in Wake Forest– one of the 5,000 schools American businessman and philanthropist Julius Rosenwald helped build for Black children in the South between 1912 and 1932. Rosenwald was the son of Jewish immigrants and a friend of the prominent Black educator Booker T. Washington. His matching fund had a deep impact in providing the infrastructure and resources Black students needed. Recent studies suggest that more than 35% of Black students in the South went to a Rosenwald school during this period, which sharply reduced the educational gap between White and Black students.

“Rosenwald’s commitment was not only to provide access to education, but to also involve the community in the endeavor,” said High. “Churches, parents, and neighbors scraped nickels and dimes together to match the Rosenwald Fund, a requirement for building a school in the local community. This humble man’s great act and vision afforded me – the descendant of slaves and sharecroppers – access to a sound education and taught me a lesson in self-reliance and the importance of partnering across race and economic barriers.”

Small acts of support and kindness surrounded High during his formative years, whether it was encouragement from a pastor, coaching and high expectations from his parents, or a teacher’s insistence on turning in quality work.

“Our DuBois teachers were the ultimate example of tough love,” laughed High. “They drove us hard to excel and taught us to be proud of our abilities and heritage.”

When High enrolled at Carolina in 1972, the first in his family to go to college, he had to take on a raft of student loans and enroll in work-study programs to fund his education – burdens Black students disproportionately carry even today.

In his junior year, High received the Marvin B. Smith Jr. Memorial Scholarship. “Although it was only $250 per year, it was like gold to me,” remembered High. “Many people discouraged me from applying to UNC, given its storied reputation. The scholarship showed me that somebody else had confidence in me and my potential, while helping me financially.”

Even though High is grateful for the opportunities he received during his formative years, he admits that it was never easy. Segregation persisted, and although schools operated under the “separate but equal” doctrine, the reality was that books, facilities and other resources at Black schools were always “less than.”

A bitter experience still remains with High: Although W.E.B. DuBois School’s 1968 football team was co-State Champion, the town of Wake Forest issued a formal proclamation in recognition only in 2018, 50 years later.

We felt the effects of such unfairness and discrimination deeply,” said High.

Although integration was mandated by Brown vs. Board of Education Supreme Court decision in 1954, W.E.B. DuBois School was integrated in 1970-71, during High’s junior year.

High was a natural leader at the integrated Wake Forest-Rolesville Senior High, and as chairman of the student council and captain of the football team, he straddled two worlds. He took part in addressing complex and divisive issues such as busing, while also helping a diverse team be successful together on the football field.

“We were equal on the field, pulling towards the same goal, but once the game was over, white and Black students were expected to retreat to their separate worlds,” said High.

A Life and Career Marked by Service

The challenges he overcame and the great and small acts of giving he experienced at W.E.B. DuBois School and at UNC’s Kenan-Flagler Business School led High to ultimately attain C-suite officer roles at several global Fortune 500 companies and helped shape their business strategy and outcomes, culture and human capital.

“Over a 40-year career, I saw the strong link between the team member experience and customer service,” he said. “When people feel welcomed and heard, and see that their ideas are acted upon, they bring their full selves to work and engage in driving success – for themselves, their team, customers and the business. I was able to lead companies in appreciating the power of having multiple perspectives at the table to drive business strategy and results.”

Now retired, High shares his time and talent with several for-profit, non-profit and startup organizations as he continues to groom the next generation of diverse businesses and leaders.

High remains committed to amplifying his impact at UNC as well. He and Kathleen were the first Blacks to create an endowed scholarship at UNC Kenan-Flagler in 2016, providing yearly funding for the Undergraduate Business Program’s annual Global Immersion Elective in South Africa.

The couple, always partners in philanthropy, has created The Joseph Cooley and Kathleen Cullins High Endowed Scholarship Fund through the UNC General Alumni Association’s Light on the Hill Society Scholarship to support deserving Black high school, graduate and professional students. Priority will be given to students who are the descendants of a W.E.B. DuBois student or any Rosenwald School student, faculty or staff member, a coach or member of the 1968 championship football team, as well as students with relatives who were members of the UNC Black Christian Fellowship. Apart from financial support, the gift will also leverage mentorship and networking support.

“This is a small way of nourishing our roots,” said Kathleen High. “Like many Rosenwald schools, W.E.B. DuBois was closed as integration progressed, but its legacy lives on. The school provided Joseph important lessons in leadership, sportsmanship and service. And amongst other things, as part of the student-led Black Christian Fellowship at UNC, both of us learned and practiced koinonia, a faith-guided principle that has taught us how to genuinely love, support, and encourage others. It is humbling to recognize both these amazing institutions while supporting deserving students.”

“Dr. King’s teachings of equality and his urging that we focus on others in ways great and small are as valid today as they were 50 years ago,” said Joseph High. “While we have come a long way, we have miles to go. We still have deep gaps in education, wealth and opportunities across racial groups in this country, and the recent pandemic has starkly highlighted them.”

“Closer to home, as a part of the Board of Advisors to the Kenan-Flagler School of Business and the Board of Advisors for The Rams Club, I acknowledge the strides we have made at UNC over the years to improve diversity and inclusion. And yet, while 36% of UNC students are students of color, only 8% are Black.”

“Also, much work is ahead of us to ensure the culture and people processes at our University, including recruiting, retention and tenure, deliver equitable outcomes for all.”

“To bridge this divide we must act with urgency to do something for others in ways great and small. Kathleen and I hope this scholarship plays a part in creating a community that corrects imbalances and inequities and uplifts those around us.”