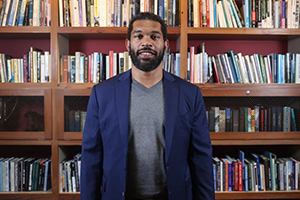 The Peppers Scholarship was created in 2009 when Carolina football alumnus Julius Peppers ’02 donated $100,000 to the General Alumni Association’s Light on the Hill Society Scholarship program.  In 2012, the fund was endowed when he made a second gift of $250,000.

“I am happy to support the Light on the Hill Scholarship,” said Peppers. “For a number of years, I have been thinking about how I could give something back to the University. Helping young people achieve their dream is a personal priority for me. Giving to this particular effort is my attempt to assist and reward some of our best and brightest students.”

Peppers, who also lettered in basketball at Carolina, was a key contributor to the Tar Heels’ reaching the 2000 Final Four. In football, he starred as a defensive end and won the Lombardi Award, given to the country’s top college lineman. He was a unanimous All-American in 2001.

“In his very quiet way, he has reached out on a number of occasions to encourage the growth and engagement of young people,” Williams said. “Serving the community and giving back is very important to him – this gift to the Light on the Hill Scholarship proves just that.”