A Day in the Life of Singapore: Our Homestay with the Tan Family 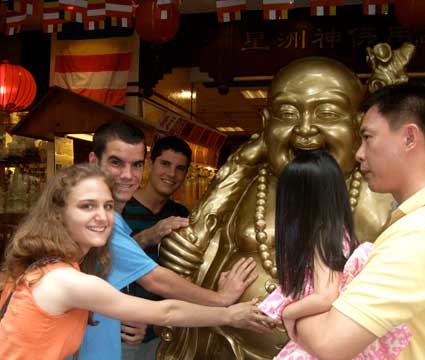 A Day in the Life of Singapore: Our Homestay with the Tan Family

The Singapore homestay is probably one of the most meaningful travel experiences of the Carolina Southeast Asia Summer Program. This year, the program is staying on campus at the National University of Singapore for about a month before dashing off to Thailand for another three weeks. The program, a combination of Asian Studies courses and tourist explorations, seeks to help us understand what we see on the streets from an academic perspective.

But only through the eyes of our local hosts are we are able to see what Singapore is really like for the people who live there. How easy it is to say, “I’d like to move to Singapore,” when all we see are clean streets, posh hotels and the tourist-friendly areas of Chinatown and the colonial district.

But these descriptions depict only one side of Singapore. When I found out I’d be traveling in Singapore this summer, my friends made jokes about the country’s strict government and all of the “ridiculous” rules there: no chewing gum (this is no longer true) or peeing on the elevator. But is the government really as strict as people say, and how stringent are the rules and fines anyway? What is it like to live in a Housing and Development Board flat? Where do people go to school and worship? What do they enjoy cooking? What are their day-to-day lives really like?

SEAS program participants Adam Glasser, Paul Ashton and I had the opportunity to directly ask and even just observe the answers to these and other questions during our homestay with the Tan family. Sharon Tan invited us to her flat in Yishun, a part of the heartlands of Singapore, to meet her family, bake homemade pizzas and go exploring.

An excellent bread-baker, Sharon had already made the pizza crust before we arrived; all we had to do was to knead the air out, flatten it into a thin sheet and cover it with sauce, cheese and our chosen assortment of toppings (diced green peppers, mushrooms and pineapple). It took only a few seconds in the kitchen to determine that the boys were better at eating the diced toppings than actually chopping them. And their cutting skills made us appreciate that, thanks to the government’s careful planning of every HDB neighborhood, a hospital was located right down the road.

Luckily, we managed to bake our pizzas without any bodily harm. Lunch was delicious but it could hardly match the large assortment of desserts that Sharon’s family had collected for us to try: tua suan, an amber porridge-like soup with bits of You Tiao (fried dough); bo bo char char, a soup with yam and sweet potato in a coconut milk broth; tau hway, a slimey tofu/ pudding-esque concoction; pulut hitam, a glutinous black rice with coconut milk; and butterfly dough, or literally sweet bread in the shape of a butterfly. My favorite was the tua suan by a long-shot: The sweet, chunky soup reminded me of apricot preserves and the You Tiao added an interesting sourdough element that left the taste buds tingling.

After lunch, I had the chance to interview Sharon and her sister, Esther, and mother, Goh, for my Singaporean identity research project. Their two-generational perspective gave me really great insight on not only what it means to be a Singaporean now, but also what it meant to grow up Singaporean before the People’s Action Party and Lee Kuan Yew reshaped the country. Goh talked about the good ol’ days when she lived in a kampong village and everyone shared with one another; she lamented the loss of such close neighbors and the inexpensive livelihoods they led, which are now only a distant memory.

Through the interview, I was struck not only by the high (and expensive) standard of living valued by many Singaporeans, but also by the ability many Singaporeans have of bettering themselves. Goh said that she stopped going to school after Primary 6, and her husband stopped after Primary 3. Still, as a pool manager, he supports the entire family (wife and three daughters) in a four-room flat and they enjoy a comfortable middle-class status. Esther is already a secondary school teacher, and Sharon is also studying to teach chemistry and biology at the secondary level. Certainly, this is a part of the Singaporean dream, kampong or not.

After our discussion, we got to see the city through our hosts’ eyes. So, we headed off to Bugis station for some shopping. I needed a watch (which I bought for $S6, including the cost of resizing). I also found a fantastic pair of powder blue heels which, while not completely necessary, considering my UNC ties, seemed at the time, almost compulsory, and at the price of $S15, a good steal. Meanwhile, Adam snagged some t-shirts for his sisters, one of which depicted a penguin carrying a gigantic Merlion, which said, ‘hi;’ and Paul began a three-hour search for a pair of long pants because apparently he wanted to poach in the Singaporean heat and humidity. (Or maybe it had something to do with a particular nightclub refusing him entrance in a pair of shorts?)

After a bit of shopping (we took several breathers from the quest to find Paul pants), we wandered inside a Buddhist temple, where Esther and her husband often worship. The Tans being Buddhist, we were treated to an excellent discourse on the worship ceremony. Each of us lit three incense sticks (we were told that any odd-number of sticks would suffice) and then held them to our foreheads to let the smoke carry our prayers to the heavens.

We entered the temple to the sound of shaking and rattling. We asked what the others were doing and Sharon explained that during prayers, worshippers often shake a cylinder filled with bamboo fortune sticks until a single one fell out. Then, they would take the fortune sticks, each marked with a Chinese character number, to a side table, where someone would give them a fortune corresponding to the numbers on their chopsticks. Good fortunes you keep, but bad ones you burn away.

I shook my fortune sticks energetically — with so much energy that I shook three out at a time. Carefully, I chose the first stick to have dropped and then rolled two crescent-shaped jiaobei blocks to determine if the fortune were correct. If both half moons fell to the same side, then I’d received the correct fortune. Otherwise, I’d have to try again.

Unfortunately, my jiaobei blocks supported my first fortune, which warned me that I was on a long and treacherous journey. Aside from the poetic language, the gist of the fortune read: Stop. Turn back. Don’t proceed. With my upcoming travels to Brunei and Thailand, I was only too happy to torch that fortune.

But Paul beat me to the burner. His fortune warned of impending death. Only Adam skipped and grinned as he read his fortune, which likened him to a bird that could fly to any distance or height and achieve success in all he did. Needless to say, Adam did NOT burn his fortune, but stowed it safely away in his wallet.

Luckily, the burning seems to have (so far) done the trick for Paul and me. Neither of us has met with horrific danger. And, aside from one incident in which the two of us (along with a few other misfortunates) got stuck on a trolley at the Singapore Zoo and held up the entire group by 15 minutes, we have not suffered too many mishaps. Paul and I are quite alive and healthy. We’re still waiting on Adam’s flight to kick in though.

With our fortunes told, we rubbed the Buddha’s golden belly shiny for good luck and then proceeded to a Hawker Center for a few “light snacks” — or rather a fantastic sampling of Singaporean cultural delights: chwee kueh, or rice cake with fried pickles and garlic; png kueh, a pink and white triangular rice cake filled with dried prawns; ondeh ondeh, a sweet green ball covered in brown sugar and coconut and gushing sweet juice; and gu cai kueh and soon kueh, both dumpling-esque dishes filled with green vegetables and jicama (a Chinese green vegetable), respectively.

Refreshed by our international special, we continued the long quest for Paul’s pants and finally stopped at — no joke — the Mickey Mouse store, where Paul not only found a pair of pants that fit his waist, but also managed to get the legs personally tailored. We celebrated his success with dinner at an excellent vegan restaurant that managed to prepare a meatless, cheese-less lasagna that was out of this world.

As we bid our hosts goodbye at the MRT station and headed back to PGP, we were filled, not only with good Singaporean cuisine, but also with the happy knowledge that we had forged lasting friendships. And as we took the MRT back to our campus dorms, we were already planning the next time we’d see our homestays.