Student Blogs – On Redefining a Legacy 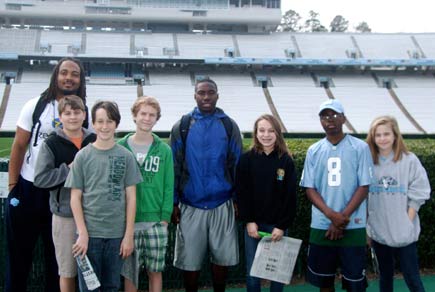 On Redefining a Legacy

In light of the Carolina Alumni Review’s article about legacies, published in the March/ April 2012 issue, I’d like to take a moment to reflect on the importance of legacies. Upfront, I must admit that I’m not a third-plus-generational UNC student. While I have several distant relatives who graduated from this University, I am not like a number of my friends who have solid powder blue family trees.

I’ll acknowledge that legacies have their benefits. They build a familial tradition within the University, something that can be passed down from generation to generation. But, as a non-legacy, I wonder why we limit our idea of “legacy” to someone who comes from a long line of Carolina graduates.

At UNC, I’ve learned to look at every situation from several angles. And so I wonder why we are forgetting the other — more poignant definition of “legacy.” Bearing a “legacy” entails so much more than the money you make, the property you have, the children you leave behind. The word goes even beyond inheriting the Carolina tradition. For, to leave behind a “legacy” speaks to the difference you personally make, separate from who your parents are or where they attended college. So at a university that strives to include, why are we setting such sharp distinctions, when the whole point of legacies is to build a strong Carolina family?

Some of our most distinguished graduates made a name for themselves, separate from familial inheritance. James K. Polk (class of 1818), was the first in his family to graduate from the University, and he went on to become the 11th president of the United States. Thomas Wolfe ’20 published Look Homeward, Angel, a widely acclaimed novel, only nine years after his graduation. His father, William, was a stone carver and never attended college. As a woman, his mother, Julia, would not even have had the chance to enroll. Andy Griffith ’49, an international television sensation, best known for the eight-year-running show named after himself, was born to parents who could not even afford to keep him in their own home for the first few years of his life; they never had the opportunity to attend college. And let’s not forget some of our beloved athletes: Michael Jordan ’86 and Mia Hamm ’93, to name a couple. All — and more — of these graduates have distinguished themselves beyond familial connections. Certainly they’ve made a name for themselves. And for Carolina.

For me, a non-legacy, dwelling on why I love UNC has become a weekly, if not a daily, routine. Every Wednesday morning I take part in the UNC Visitors’ Center’s “First Look” program, which gives middle-school students, many from financially challenged households, a peek into what’s in their futures. Many of these students go to school with the belief that they won’t be able to afford college, much less a stellar university like Carolina. Each week, through the First Look program, UNC students like myself try to change their minds: to tell them about financial aid and scholarship opportunities that will open the door to higher education.

And to do this, we have to seduce them. To make them fall head over heels in love with campus. With college in general. And with UNC in particular. We take them to the Davie Poplar, the site of the University’s founding, and to the Old Well, where students drink at the beginning of each semester in the hopes of earning straight A’s. We stand on the steps of South Building (or, what one touring student termed “The Chancellor’s Mansion”) and look out over Polk Place, where UNC students are picnicking, studying and tossing Frisbees. Then we walk through the Pit, where college kids serenade them with free candy, fundraiser pep talks and offers for free swipes into the dining hall. And finally, we walk through Student Stores, past the Bell Tower and into Kenan Stadium.

And that’s where we get them. Where it really sinks in. That’s where they discover the truest love of all. In the shape of football players walking around the field. They are soon peppered with requests for signatures and photographs and even a few marriage proposals. And, inevitably, the players good-naturedly acquiesce to (almost) all of them. They play their part in the seduction process. By the tour’s end even Duke fans are ready to shed their previously ill-formed allegiances and apply to Carolina.

Each week I let a group of students experience what I love most about UNC: the warm smiles from friends and strangers. The frenzied rush of students passing through the Pit around noon. The cheerful chiming of the Bell Tower, playing the fight song. The time-tested spirit that means wearing our school colors proudly even after a crushing buzzer defeat to Duke at home and then again (with smiles on our faces) after a sound redemption at Cameron.

The kids interact with students on campus. They’ve played corn hole with Dance Marathon recruiters in the Pit, and they’ve listened to a number of student body president campaign spiels. They’ve walked through Carroll Hall and been invited to learn how the recording equipment works for a TV news class. And they’ve stood in line for lunch behind hungry students at Rams Head Dining Hall, where they fill plate-upon-heaping-plate with specialties from every food stall. For a few hours, these kids get to see, hear and taste what it would be like to go to college. They experience all this, and they think, “That could be us in a few years.”

And so, I return to legacies. Many of the kids that I show around campus each week couldn’t name a single relative who ever donned a powder blue robe or received a UNC diploma. Yet, many of these same kids leave campus with wide eyes and big dreams of doing just that. They wouldn’t be “legacies,” by our first, limited definition, but they might be the next Andy Griffith. Or the next Michael Jordan. Or the next Mia Hamm. They hope to create legacies of their own. And they hope to join the Carolina family. As a part of this great University, I look forward to expanding our definition of “legacy.” To extending the family tree.