Never Have I Ever … Yet 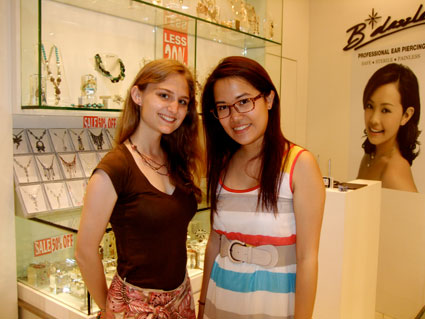 Never Have I Ever … Yet

That’s right. There are a few things in life that most people my age have done, but I just haven’t gotten around to yet, like: learning to ride a bicycle, getting my driver’s license and piercing my ears. Like most kids, I started learning to ride a bike, but when my parents said that the training wheels should come off, I said I’d just hop off instead. Similar story with the license; I survived driver’s ed, but never bothered to go to the Department of Motor Vehicles. I guess you could say that I have a fear of wheels. I also have a fear of needles, which explains why I never got my ears pierced … until my return trip to Singapore.

Last summer I traveled with the Carolina Southeast Asia Summer program to Singapore, Brunei and India. I came back to Southeast Asia this summer as the research fellow for the same program, and during my stay, I met up with the Summer 2011 SEAS program assistant, Hui Qian Tan. She, too, had never gotten her ears pierced.

We reunited at a dim sum lunch with the rest of the SEAS program, and from the beginning it was a day of firsts: my first Chinese dumplings, my first taste of chicken’s foot (actually, quite tasty, if you can get around all the toe bones) and my first (and probably last) piercing. The idea to get my ears pierced was completely spontaneous. During lunch, Hui Qian mentioned that she’d finally decided to break down and pierce her ears. (Her mother had told her that the first daughter to get her ears pierced would receive her grandmother’s fabulous earrings, and the bribe had been enough to convince her.) With the excitement of trying new things urging me along, I suddenly heard myself announcing that I’d be joining Hui Qian. I’d pierce my ears, too. Once the announcement was made, there was no going back. Spontaneity isn’t really my style, but there’s something fun in going against your own style occasionally, and I’m glad I did. After all, when would I next have the chance to get my ears pierced with someone about my own age (and a few years older, to top that!) who was also a first-timer?

Many people would urge you against getting your ears (or anything else for that matter) pierced abroad. A fair enough warning, in general, but it’s certainly not applicable in Singapore. The first day that I toured the country, I actually saw a street sweeper with nothing but flower petals in his bin. And with a $S1,000 fine for littering, trash on the roadside is almost obsolete. With spotless streets, you can imagine the quality of the hygiene everywhere else. Getting my ears pierced in Singapore would probably beat going to UNC Hospitals and getting the top surgeon to pierce my ears himself.

So, when the last of the dumplings and liu sha bao (or salted egg yolk custard buns) had been enjoyed, Hui Qian and I made our way to B*dazzle Jewelry, a ritzy shop on Somerset Road, which Hui Qian had picked out for our debut piercing. Once there, we looked through an assortment of studs — pure gold, titanium, nickel-free, all the way down the line, and we both selected the purple titanium with crystals. The piercing itself took much less time (and pain!) than the selection process. With the click of a high-tech disposable cartridge ear piercing system, I lost one of my sure-fire “Never Have I Ever” game-winners and gained instead a beautiful set of earrings and a great memory.

Our ear piercings also came with three complimentary check-ups. So last week, shortly before I left Singapore, Hui Qian and I got together again. Of course, our visit began, as usual, with a delicious meal, this time at a delightful Hawker Center, where we feasted on chicken rice with mango bean curd for dessert. And then we headed to B*dazzle for our check-up, where I discovered that one of my earrings was too tight, and I was about to have a gaged look instead of a traditional piercing. Imagine my parents’ surprise if I’d come home with gaping holes in my ears instead of some simple crystals!

I was relieved I’d returned for the check-up. But I’m even happier that I finally got my ears pierced and with a good friend, no less. And now that I have the thrill of trying new things still fresh in my mind, I have my sights set towards that bike and car back home.