Painting Up: Finding the Perfect Shade of Blue 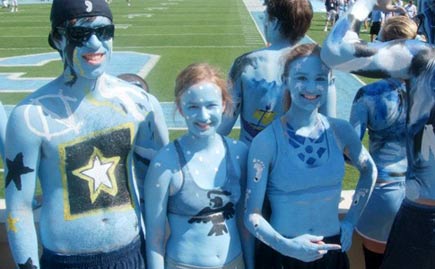 Painting Up: Finding the Perfect Shade of Blue

Following the weekend’s football win against N.C. State, I’d like to take a moment to talk about an activity close to many students’ hearts.

I’m not talking about tailgating. Or the good ’ole alma mater. Or even the Victory Bell we possess more often than not, after beating Duke. (Let’s just pass over that game a few weekends ago.)

No, I’m talking about painting up.

For the uninitiated, “painting up” would be more aptly termed “painting over” — all over —  covering face, arms and midsection in that favorite shade of powder blue.

If you’ve been to a Carolina football game and peered over at the student section — or maybe even been a part of Carolina Fever yourself — then you’ve seen those tried and true fans covered head to heel in Carolina blue.

I was just initiated into the tradition, when I painted up with friends from my dorm earlier this season.

You can’t say the students at Joyner Hall don’t take their Carolina blue seriously. If you take the blue straight from the bottle, you’ll come out the neon shade of a UNC trash bag instead of the Carolina blue sky. So in the wee hours of the morning, before most have even rolled out of bed, we mix regency blue, true navy and white together, until we achieve the perfect shade. And when I say early, I mean early. A noon game means we’re on the third floor painting up by 8 a.m.

By the way, for the skeptics believing that several different shades qualify as Carolina blue, the world-renowned fashion designer Alexander Julian will back me up on this: there’s not. He actually trademarked a Carolina Blue, so look it up. Or just look in the stands at the Joyner students for a near-perfect replication.

After a team of about 12 of us run through the Pit and Student Stores, whooping and hollering and sending all the little kids decked in jerseys and baseball caps scurrying to their mothers’ sides, we arrive first in line at the student gates. The game against ECU doesn’t start until 3:30 p.m., and doors don’t open until an hour before. But we’re there by noon. After all, if you’re not first in line, you won’t get prime pick of the seating — or, rather — standing room. And we don’t paint up for nothing!

The next-earliest students don’t come ’til around 1:30 p.m. Late birds! (And in that trash bag teal color, to boot.) They try to edge us out of our first-rate position, but we’ve already spread to each of the doors, and one of the student leaders, a guy decked out in sunglasses and blue-painted pigtails, starts negotiating.

“Where do you want to stand?” Crazy Hair asks, adding that we want front and right.

In the end though, it’s still a race. When the gates open we all dash madly to the empty stadium, trying to edge out a handful of other students who might want the same placement as us.

On my first foray into the world of painting up, we get our desired location: front and right, near the cheerleaders. You see, for us, painting up is only the half the fun. We are what you might call active viewers.

First of all, we never sit. But our dedication goes way beyond standing. When the football players stretch, we stretch. When a male cheerleader mounts a board to do pushups for every point scored, we push down on the front mats, too. And before the game starts, when the players run up against the sidelines and chest-pump the students on the front row — well, that’s us.

The thing about painting up is that the blue quickly becomes a part of you. Aside from the hottest and rainiest games, when the paint re-liquefies and drips off in thick blue gunks, the paint becomes less and less noticeable as it dries.

In fact, by the second half of the ECU game, I forget about my strange attire — or, rather, the lack thereof, and wonder why people are staring at me.

And I’m asked to pose for a number of pictures. Mostly with people I’ve never met before. I’m a Carolina Avatar — an attraction for kids and grown fans alike. And I walk with a pack. We’re a sight for fans’ eyes.

After the game, I return to a slew of Facebook messages asking, “Did I see you at the game?” and “I think I met your twin…”

Yes, that was me.

And for the record, there’s a lot more blue where that came from.