Greenwich: Two Places in One

Many people have a bucket list. Some lists are more complete than others. I usually add to my list after the fact, just for the satisfaction of checking a few things off. Here’s a few of mine:

Actually, that last one is pretty easy to do. Drive to your nearest state border and straddle that invisible line by the “Welcome to South Carolina” sign. I used to break up the long road trip to visit my grandmother in Mississippi by begging to pull over and stretch my legs … across state lines.

But this time around, while touring England, being in two places at once took on a whole new meaning. Home of the prime meridian and the man who halved the world, only in Greenwich, England, can you stand at zero-degree longitude — one foot in the East and one foot in the West. Two hemispheres at once. 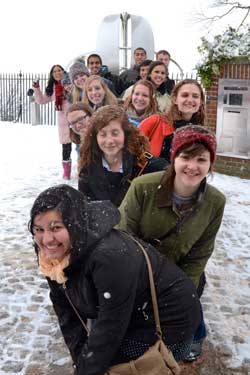 As part of Carolina’s Honors Semester in London program, our flats are nestled in the heart of the city, and Greenwich is just a bus/ferry ride away. So the weekend after arriving in London, our 25-person group took off with UNC traveling Professor Richard Kendall for a day on the meridian. As we pulled from shore, the River Thames provided us with a beautiful view of London — St. Paul’s Cathedral, Big Ben, the MI6 (the building blown up in Skyfall) and the Waterloo Bridge, among others — all shrouded in fog.

We soon reached Greenwich, a cozy contrast to busy London. Blanketed in snow, the town seemed to be on holiday except that everything was still open. Heavily bundled children used trashcan lids as sleds and bounded down the steep slopes. Families built snowmen with flourishes, extra balls of snow (because there was just so much), carefully crafted sticks for glasses and a traffic cone for a rather colorful top hat. And groups of teenagers hurled snowballs at us as we made our ascent to the National Observatory.

Some people in our group had been to the Four Corners, and so being in two places at once seemed, well, like half the fun. But even the skeptics were hushed when we reached the peak. In the fog, it seemed as if we stood in the clouds. Our guide told us that in better weather you could see as far as London, but with our view obscured Greenwich seemed like a world upon itself, protected from the outside, insulated with little town wonders on the inside.

How many other places can claim the honor and responsibility of both global standard time (check out the accuracy of your watch and match it to GMT, or Greenwich Mean Time) and the pocket watch? The answer is, of course, nowhere. After straddling the prime meridian, we headed to the top of the hill and peeked over at the River Thames. Then, wandering into what appeared to be a modest old country home — sparse but finely furnished with gilded mirrors and richly embroidered red curtains — we found ourselves guests of Sir George Airy, the man who in 1851 established the dividing line that helped bring ships home from sea. Climbing a short spiral staircase, we came into the Octagonal Room, which was built to help the astronomist observe the movement of the sun and stars, a method used to configure latitude. All of this — and much more — was explained to us by a man in white stockings and gray overcoat who was carrying a pocket watch that must have been right out of Alice in Wonderland.

That’s when he got to the clocks. Back in the 1700s, shipmen were still looking for a way to accurately measure time out at sea. On the waves, pendulum clocks would swing out of rhythm, distorting time. So, a £20,000 award — the equivalent of millions pounds today — was promised to the first person who could create a time piece that worked on the ocean. John Harrison, a clock maker, spent decades trying to perfect different models of what he named the marine chronometer. Eventually, model H4 “Sea Watch” with a winding crank survived the test, and he received the award money, as well as the later acknowledgement of designing what would later be perfected into the pocket watch.

But enough about measuring time and space. Greenwich is perhaps less famously known for having one of the best pie shops in all of England … in my humble opinion. Goddards at Greenwich has been around since 1890, though, so at least a few people past and present must agree with me. We ordered traditional English delicacies like steak and kidney (or ale for those who couldn’t imagine consuming actual organs) pie and mash (a creamier, more buttery version of our mashed potatoes). If it hadn’t been for the upstairs room with plenty of large tables, the 27 students and chaperones would have completely filled the downstairs of the quaint pie shop on 22 King William Walk.

Our pies came out on large platters, which we took upstairs. Picking out tables by the windows, which overlooked the small street, we cut into thick buttery crusts that encased savory slices of steak. Ale-flavored juices flooded our plates, flavoring the mash. The hearty pie and mash was good, but the rich chocolate pudding cake drowned in warm custard stole the attention of my (and just about everybody else’s) fork.

As we feasted, I couldn’t help but look around. So much history! The pale green walls and counters lined with pies almost hummed with stories, shared and lost. We appeared to be the only outsiders in the shop. Most of the diners seemed to work in and around town. A quiet familiarity resonated throughout the shop, as if the staff knew minced beef pie and extra gravy as “George” from the nearby pub and rhubarb crumble and two scoops of vanilla as “Nathalie,” the florist’s daughter. Then again, maybe George and Nathalie also were just passing through. Maybe the staff is just that friendly.

Leaving Greenwich, I found that I’d done more than stand in two places at the same time. I’d somehow managed to be in two places in one. With old time charm and the pleasantry of modern conveniences, Greenwich has embraced both past and present in a way that makes it distinctly both. So warm up with a hot pie from Goddards, take a stroll through the market place, go stand on the prime meridian and then come home knowing you’ve straddled more than a line. You’ve straddled time.