Student Blogs: Through the Doors of Pemberley 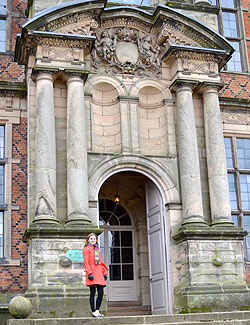 At the age of 4 there was only one way that my mother could pull me away from a play date. As my friend and I hid in the closet, she’d call out that Pride and Prejudice was on air. Suddenly, I’d pop out, ready to go, leaving my friend huddled in the closet. I’ve remained a Jane Austen devotee to this day.

And that’s why I applied for a Summer Undergraduate Research Fund to travel to England to explore the evolution of Mr. Darcy’s Pemberley estate, first described in Austen’s Pride and Prejudice and later depicted in film adaptations of the novel. Specifically, I want to investigate for myself scholars’ differing viewpoints on the grandeur-ization of the estates through subsequent adaptations. That means heading to National Trust estates across the country, from Chatsworth and Ilam Hall in Derbyshire to Harewood Park and Bramham Park in Leeds, to analyze the architecture and gardens and interview estate managers and film personnel about the making of the movies. It also means coming up with a systematic way to measure a subjective idea — grandeur — in order to come up with semi-quantitative results. I can’t imagine a much more difficult task: weighing the merits of a picturesque hilltop approach against a beautifully crafted gilded ceiling. It’s a challenge I’m still struggling to work out.

As the 1995 BBC version of Pride and Prejudice, starring Jennifer Ehle and Colin Firth, is my favorite adaptation, Sudbury Hall was the obvious first choice to start my research. And so, this past Friday I boarded a train to Crewe and made an exchange to Tutbury and Hatton.

“What are you doing in Hatton?” the traffic patroller laughed, when I inquired about platforms. “Going to prison?”

In fact, there is little to do in Hatton but go to prison. I saw a sign leading the way from my otherwise bleak bus window on my way to the estate. But while the town is barren, the people living there are not.

When I hopped on the bus, I asked for the estate’s stop but the driver had never heard of it. So, the other bus riders rallied together and an elderly lady helped me figure out the stop. She got off, and I’d have missed the stop completely if it hadn’t been for yet another elderly lady who made sure that I got off.

“Are you touring the house?” a young guy behind me asked.

I said that I was.

I nodded and thanked him, knowing him to be wrong. After all, tours were given at 11:30, so at half past 12, the house had to be open. I walked up a dusty lane approaching the estate. But the estate was closed — until one. So, I made my way to the tearoom, as Charles had suggested.

After feasting on fruit scones with clotted cream and jam and a steaming pot of Jasmine tea, I made my way back to the estate, at a little past one. And who was there to greet me? But Charles himself! He turned out to be a volunteer guide.

I’d written numerous emails, trying to contact the house manager before I arrived, but to little avail. So, I explained my research to the volunteers at the door and asked if they could point me to the right people. I stayed in the house all day. Shuffled among eager tour guides wanting to tell me about each of the different rooms and even securing a few interviews with the most knowledgeable among them. In the Long Gallery, filled with row upon row of impressive portraits of the Vernons, the family who owned the estate until debts forced them to turn it over to the National Trust in 1963, I met one man, Clive Edwards, who had been a tour guide at the home for over 20 years — he’d even been present during the filming.

“I was Colin Firth’s stuntman,” Clive said with a wide grin. “Remember the lake scene?”

I laughed at the joke. There is a famous scene in which Darcy strips down to his undergarments and dives into a lake. Clive didn’t exactly have the build to be a stuntman.

“I told that to one lady, she came back with her sister and husband for autographs.” He chuckled. “It took a lot of convincing for her to believe it wasn’t me.”

There’s another thing about that lake scene — aside from Clive’s role in it: The lake doesn’t actually exist on the grounds of Sudbury Hall. The directors originally wanted to film at Lyme Park, an estate in Cheshire. But renovations to the inside of the house made filming there impossible. So, instead of using one estate, the directors decided to use two: Sudbury Hall with its lavish Long Gallery and the Great Staircase accented with fantastically detailed gild work and large-scale portraits for the interior, and Lyme Park with its picturesque hilltop approach, natural gardens and the now infamous lake for the grounds.

“If you stand by the window in the saloon, you can look out the same window as Lizzie in the movie,” Clive told me.

But when I looked out, I saw not the lake but rather a simple, yet elegant garden. The Vernons never completed George Vernon’s grand vision for the grounds.

“Of course, Lizzie was looking at views 50 miles away in the opposite direction,” Clive chuckled.

And Clive had a slew of stories from the filming, too. “There was this one bloke, an extra, and he was powdered up, dressed so nice with a wig, too, and he was ready by seven in the morning,” he said. “I watched that guy sit in a chair in the entranceway hour after hour, patiently waiting. Nine o’clock came, 10, 11. Around one, he stood up and got a sandwich, came back and ate it. They didn’t call him until 4:30 in the afternoon. He popped up, so excited. And he had only one line. He made the nicest bow and said his line, welcoming Mr. Wickham into Mr. Darcy’s study.

When the show aired, I waited for him to come on. But the funniest thing happened. The directors decided to make it a flashback scene, so they made it all blurry and muted his line.

That poor bloke waited all day. That was his only job. Except maybe a few times he stood up to carry around a plate of chocolates in the background.”

Clive laughed uproariously. “’Course that didn’t happen to me with the lake scene.”

I think we could have talked for hours. But we were interrupted by the house manager, who came into the Long Gallery bearing a large, overflowing box. Lucy Godfrey invited me downstairs to sit on the red velvet settee and take a look through the box’s contents: original photographs of the filming, letters between film personnel and the previous estate manager, a booklet with day-to-day filming locations, etc.

“Make digital copies of whatever you want,” she told me. She didn’t mention that she was staying late to make it all possible. She just assisted with the copy machine and took down the bus schedule to make sure I got home at a decent hour. And when I finished copying, she even offered me a few of the original photographs as keepsakes. The portrait of Colin Firth standing in full dress by the fireplace will hold a permanent place above my bed.

When I returned to London late that night, I immediately emailed Inger Brodey, the UNC professor who is advising my project and teaches a course dedicated to Austen’s works. I waxed eloquently about Sudbury’s warm welcome. “Just like Elizabeth’s reception at Pemberley!” Professor Brodey responded in an email. And she was right, of course, although I had not thought of it at the time. My research looks at grandeur — something that involves rather subjective analysis — but after my experience at Sudbury Hall, I have a better idea of just how to measure it. Sudbury Hall is certainly grand: high, intricately carved ceilings, gilded mirrors and a richly furbished bedroom once let out to Queen Adelaide, following the death of her husband, King William IV, certainly attest to that.

But one factor of grandeur that I had not first considered revolves around hospitality. And from the kind ladies on the bus who guided me on my journey to the hours of conversation I enjoyed within the house to Lucy’s generosity of time and material, I found Sudbury Hall — indeed all of Hatton — quite grand. Prison and all.