The Spectacular of Vernacular and a Chicken Named Blinkey

The Spectacular of Vernacular and a Chicken Named Blinkey

Imagine, if you will, a man who goes to the deli to buy a chicken he names Blinkey. Upon checking out, he drives to the coroner’s where he pays for Blinkey’s entire funeral service, complete with burial. Now, imagine that 10 years later he exhumes the poor chicken and collects its remains for an autopsy to determine it’s cause of death.

This is no animal rights story. It’s not really even a story about a chicken named Blinkey. This is the story of a man, an artist, really, named Jeffrey Vallance, who bought, buried and exhumed Blinkey and made it into art. That is, he incorporated Blinkey’s bones into a performance relic.

But the story goes well beyond Jeffrey Vallance. The story spreads its reach to incorporate the lives and works of 25 cutting-edge artists who challenge not only the boundaries of art but the viewer’s comfort zone as well. 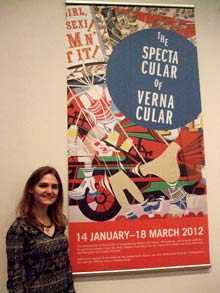 The Spectacular of Vernacular, a traveling exhibition which began at the Walker Art Center in Minneapolis and ends at Ackland Art Musuem on Franklin Street, will run from January 13 to March 18.

After reading a raving revue of the exhibit in The Daily Tar Heel, I asked my friend, sophomore Georgia Titcomb, an art major, to go to the exhibit with me. She loves art. I love language. What better way to spend a rainy Friday afternoon than tucked away in an art gallery? (Read Georgia’s reaction)

An hour and 55 pieces of artwork later, we were much the wiser for the connection between art and “vernacular,” a term defined at the beginning of the exhibit as describing more than just language but other art forms as well. Among my favorite interpretations of the word included Marc Swanson’s crystal-studded “Looking Back Buck” and “Antler Pile” representing his expanding definition of manhood, Dario Robleto’s “Demonstrations of Sailor’s Valentines” commemorating widows’ expressions of grief after losing their husbands at sea, and Faith Ringgold’s “Over 100 Pound Weight Loss Performance Quilt” explaining the artist’s battle with fast food and other greasy delights.

I could describe for you the way the crystals of “Looking Back Buck” glitter in purple and gold hues. How each hand-cut paper and seashell flower covering the commemorative Valentine will leave your mind stunned and your hand cramped from vicarious carpel tunnel. How you will laugh at Faith Ringgold’s clever poetry printed on her quilt and repeat certain lines over and over: “… I was a fat feminist. Always looking for a quasi politically correct excuse to eat.” (You don’t easily get over lines like that.) But I would be doing you a disservice. If I took one thing away from the exhibit it was this: that “vernacular” is more than just words. Don’t settle on me describing the show. Go see it for yourself.

But a word of caution. When a sign reads: “Imagery in this video may not be suitable for all viewers,” mind the warning. For around the corner you may or may not be serenaded by a topless shrieking woman pumping her breasts. You may or may not. You’ll just have to see for yourself.