A Line Worth Waiting In: Hearing President Obama Speak at UNC 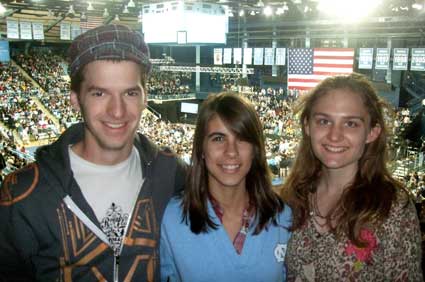 A Line Worth Waiting In: Hearing President Obama Speak at UNC

If there is one thing I hate more than standing in line, it’s standing in a long line. And Tuesday afternoon I stood in the longest line of my life. No exaggeration, it must have gone back three fourths of a mile, stretching from Parker dormitory on Stadium Drive, past the baseball stadium and the law school, and into Carmichael Arena.

But for the first time ever, I didn’t even mind waiting. After all, only three fourths of a mile separated me from seeing the president of the United States.

President Barack Obama visited campus Tuesday afternoon to deliver a speech about an issue close to many students’ hearts: student loans, and, more importantly, whether or not the interest rate on them is going to increase in July.

The doors of Carmichael opened early — around 9:30 a.m. — and the stadium quickly filled with people anxiously awaiting the president’s arrival and his afternoon speech.

Student loans became very real to me a few weeks ago, when I was getting dinner with a friend from another university (that darker one on the other side of Tobacco Road). He told me that he receives $25,000 worth of loans every year. That means he’ll graduate with $100,000 of debt. The number hit me hard. Just moments before we’d been choosing which restaurant to go to. Now, I suggested eating Ramen.

No, the way I saw it was that my friend at Duke — and many of my friends even at Carolina — have a big problem on their hands. When we were small, we’d go to our parents with our concerns. But this problem affects our parents, too. So, if our parents can’t help, who do we turn to?

When I found out that President Obama was going to speak about the very topic that had been consuming my thoughts over the past few weeks, I knew that, final exams aside, I’d be spending my time in the pouring-down rain, waiting in a line looped around Belk Track on Sunday to get a ticket for a chance to stand in Tuesday’s line.

Sunday afternoon found me dripping wet, but prosperous: I had a ticket to hear the president of the United States talk about an issue that directly affects many of my closest friends. After all, usually if we had the chance to hear a president speak, we’d have to drive halfway across the country to hear him talk about the ailing economy, a milieu of wars, or, worse — just plain politics.

But except for the copious applause punctuating his almost every sentence, when I left the arena Tuesday afternoon, I felt more like I’d had a personal conversation with the president, than that I’d just attended a speech.

And, judging from the “amens” and “that’s rights” shouted from the belfry, I don’t think I was the only person who felt that way.

President Obama personalized what could have otherwise have been a rather dreary topic. He said he knew how it felt to be burdened with student loans — that he and Michelle were in the same boat as many UNC students now, until only a few years ago.

And hearing that even the president (at the time a prosperous congressman) had been saddled by student loans until less than a decade before moving into the White House only re-emphasized how important Congress’s decision is in July.

Doubling interest rates from 3.4 percent to 6.8 percent could be enough to discourage some high school students from even applying to college. If $100,000 in debt sounds bad, think about doubling the interest on that $100,000.

But President Obama was quick to turn the conversation to a more, dare I say, hopeful tone.

“And I’m not quitting now,” he said. “Because no matter how many obstacles stand in our way, I promise you North Carolina, there are better days ahead. We will emerge stronger than we were before. Because I believe in you. I believe in your future. I believe in the investment you’re making.”

I appreciated his optimism. I hope it’s contagious in Congress.

On Tuesday, we had the chance to see a different side of the president. In fact, when President Obama opened his mouth, I didn’t feel like I was listening to a president at all. He sounded more like another student, using slang, dropping his g’s and talking about what really matters: student loans, of course, but also, Carolina basketball.

“I just want to remind you right off the bat, I picked UNC to win it all on March Madness,” he said. “And if Kendall hadn’t gotten hurt, who knows where we might have been.”

I think his comment could be applied to the issue of student loans as well. If interest rates go up, who knows where we might go … or not.