How I Met Your Me 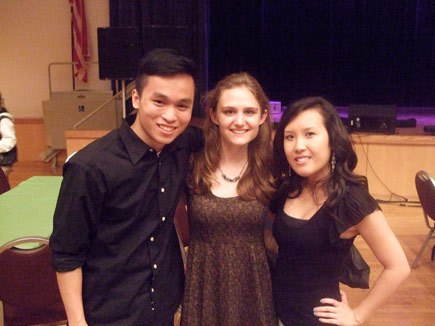 The author with her friends Khoa Nguyen (left) and Trang Nguyen.

How I Met Your Mẹ

I’ve seen several episodes of How I Met Your Mother, but none of them compare to the UNC Vietnamese Student Association’s VietNite: “How I Met Your Mẹ.” Saturday night’s “mẹ” (Vietnamese for “mother”) spin-off in the Great Hall included cultural fashion shows, martial arts performances, singing and dancing.

And, of course, in light of the popular television series, the framework of the show was structured around a skit in which a Vietnamese father tells his two daughters the story of how me met their mẹ. “Clueless” and “socially-awkward” don’t even begin to describe the younger version of the father, Ping. So, he enlists the help of a friend to teach him how to act around women, in hopes of meeting his future wife. Woven within a slew of songs and dances, Ping’s difficulty charming the ladies unfolds.

But first, a few highlights from the show. Gigantic orange and green lion puppets, each operated by two dancers, fairly breathe with life as they sway, jump, fight and even blink their eyelids and feign sleep. Several talented musicians sing Vietnamese pop songs, and several others fill the room with classical piano music. Later, a Vivinam martial arts group demonstrates balance between skill and humor with a hilarious skit about a guy trying to get a girl’s attention. Uninterested in receiving the boy’s advances, the girl fights him off with a rolled-up magazine. So, the boy grabs a small kitchen knife, then a larger knife and finally a sword. Each time it appears that he will win, but no matter how big a sword he draws, she always gains the upper hand. And he always ends up flat on his back.

Each of the performances teaches Ping a lesson about how to attract women: from learning how to dance to becoming a good fighter. But unfortunately, Ping’s American friend only leads him further astray. And while Ping is a diligent student, he ultimately meets his wife and wins her heart by being himself.

But, while the showcase told the story of one kind of meeting, the event was special to me for a slightly different reason. Allow me to tell you about how I met two of the performers.

I met Khoa Nguyen back in high school, shortly after he arrived in Durham, from Vietnam. He didn’t speak much English, but he still managed to ace our chemistry class. We struck up a friendship, which resulted in leisurely evenings with his family, sitting around the dining room table. At his house, I tried Vietnamese delicacies, like marinated gizzard and caramelized shrimp still in their shells. I also learned to use chopsticks, an experience which resulted in one rather unfortunate incident involving a piece of chicken flying into his father’s soup bowl. Even after Khoa enrolled at N.C. State, we continued to get together to exchange stories and resume lessons in proper chopstick etiquette.

Several years later, as a first-year at UNC, I met Trang Nguyen (Trang and Khoa are not related) in line for a book signing at Memorial Hall. “My name’s Trang,” she told me. “Like ‘tang’ with an r.” We also became close friends (probably in part because she was not privy to my hazardous chopstick skills). We attended many events together, not least among them our first UNC-Duke basketball game (which we got into by volunteering to clean the stadium afterwards: a dark and treacherous task involving soupy popcorn, benumbing stickiness and a sure-fire bond to anyone else desperate enough to resign herself to such a post-game destiny).

As members of VSA at UNC and State, respectively, both Trang and Khoa performed at VietNite. First, Trang modeled a beautiful powder blue áo dài, during a traditional/modern fashion show. Then, as a part of State’s VSA Dance Team, Khoa showcased a traditional social dance, complete with conical hats and fans. You can imagine my delight when, after the show, two of my dearest friends finally met.

But I’m getting ahead of myself. Let me rewind. The VietNite showcase ended with a special performance by Alan Truong, the YouTube sensation and founding member of the award-winning dance group, The ArchiTEKS. Hailing from Houston, Alan wowed the audience with several controlled hip-hop dance combinations, before explaining that he wanted to dance for a particular someone and that he needed inspiration. And so, he surveyed the audience for one eager, single girl “over the age of 18, please,” who would be the recipient of his next few dances. Many girls in the audience raised their hands, but none were so eager as my friend, Trang. Both her hands went shooting up. And a few moments later, she was sitting at the front of the room, under the hot gaze of the spotlight … and of Alan.

The fact that Trang volunteered didn’t really surprise me. After all, she’s done crazier things (like walking around the Dean Dome with a trash bag and scrunched nose). What really surprised me was how she introduced herself to Alan. When she pronounced her name, it sounded nothing like “‘tang’ with an r.” And I wasn’t the only surprised person in the audience. Among those shaking their heads was her very own roommate of two years. The performance may have been called “How I Met Your Mẹ,” but I will always remember it as the story of “How I Met Trang” — for real this time.