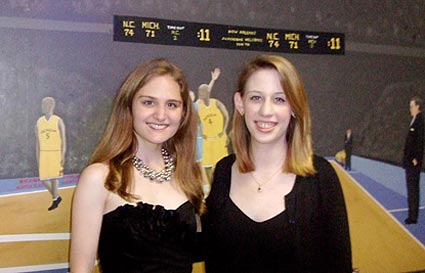 As the school year came to a close, so too did an ongoing tradition with one of my friends. Throughout the semester, Julia Nething and I spent many a Saturday evening delving into my collection of classic Hollywood black-and-white films.

To say that I am a Hepburn fan would be a masterpiece of understatement. I have watched every Hepburn — Audrey and Katherine — film I can get my hands on, and I’m still craving more. My infatuation is not just with the Hepburns, it is with black-and-white films in general. The 1940s and 1950s were the golden era of the silver screen. Now we have color, but the extra hues cannot make up for inferior actors and storylines. While Hollywood has tried (and failed!) to remake many movies, today’s directors have kept their hands off most Audrey and Katherine films, which speaks a great deal to their unparalleled, talent. After all, you can’t copy the cast in Audrey’s A Roman Holiday (also starring Gregory Peck and Eddie Albert) and Katherine’s Bringing Up Baby (also featuring Cary Grant and Barry Fitzgerald).

Thus began our Hepburnathon — one Hepburn (either Audrey or Katherine) film about once a month throughout the semester. And we started most of these marathons with yet another tradition, this one familiar to UNC: dinner at Franklin St. Pizza and Pasta. What do a casual pizza parlor and the Hepburns have in common? At first, not a lot, but upon closer investigation, they have more in common than you might think. Silver screen enthusiasts, like myself, tend to embrace the classics. And Craig Samuels, the owner of Franklin Street Pizza and Pasta, is the same way. He left his pizzeria in New York to found the one in Chapel Hill in 1993, bringing with him his grandmother’s recipe for marinara sauce. A self-proclaimed traditionalist, he told a Herald-Sun reporter in a feature about the restaurant that while he’s added a number of specialty pizzas to his menu, like Florentine, Sicilian and cheese-less primavera, he prefers the cheese, and indulges in a slice every day. 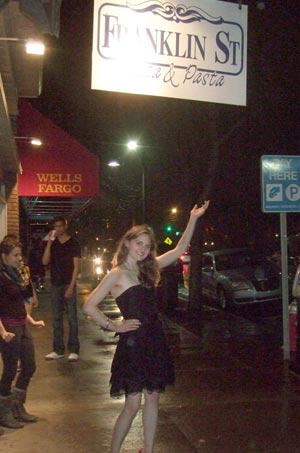 And just as a good movie warrants a second, third, and fourth viewing, Franklin Street Pizza and Pasta has a stream of regulars. Some come after the UNC football games, others have been seen lined up at the front window, watching the NCAA basketball tournament. But my friend and Italian classmate, Katie Coletta, takes “regular” to a whole new level.

“I used to go to FSPP at least once a week — though, I won’t deny that my brother and I once went there three times in a 24-hour period, and ordered the Penne in a Pink Basil sauce each time,” she said. “What can I say? It’s too delicious.”

But Katie said she comes for more than just good food. “It’s really the atmosphere of the restaurant that holds most of the charm,” Katie said. “The owner and the staff are all so friendly, always striking up a conversation or greeting you — they know your name.”

Aside from the recipes and regulars, there’s one more nod to tradition at Pizza and Pasta. As soon as you open the doors, you’ll find a mural of Franklin Street stretching across the wall. And step into the back room and you will time warp back to the final moments of the 1993 championship game, when UNC beat Michigan’s Fab Five and gave Dean Smith his second NCAA tournament win. How much more Carolina tradition can you ask for?

So, before each film showing, Julia and I would dress in our little black dresses and kitten heels and set the tone for the evening by bringing a touch of Audrey’s elegance and class to Pizza and Pasta.

Before college, I could name the number of friends I had who were willing to watch old movies on one hand, but this year my whole dorm floor talked about having a marathon — a plan we’ve earmarked for next year.

But while I’m looking forward to continuing the marathon with Julia and my hall mates next year, I’m sad that the other half of our tradition will come to an end. Julia and I jumpstarted this semester’s ongoing marathon with Audrey’s first film, A Roman Holiday, and Franklinized our own Italian experience — Julia with Penne with Pink Basil sauce and me with fettuccini alfredo.

But when we return to campus in the fall, Tomato Jake’s will have replaced Franklin St. Pizza and Pasta. (Already by this semester’s end, the sign outside the restaurant and our receipts bore the new name.) A few of the traditional favorites will remain on the menu — like the Pink Basil sauce (which Pizza and Pasta used to can and sell over the counter) and the garlic knots.

And one more thing may remain the same: Just because ownership has already changed hands, doesn’t mean that Craig has left for good. “Even though ownership has passed over to Tomato Jake’s, Craig, the old owner, made a surprise appearance the other day while I happened to be there,” Katie said. “He literally went from table to table, talking to everyone in the store — everyone else was a regular, too — asking how they were, joking around. Even though he’s already gone, that restaurant has so much love in it.”

Still, like it or not, some traditions aren’t as permanent as the silver screen. So, next year I’ll still be watching classic movies with friends but come dinnertime I’ll have to find something new on the menu.