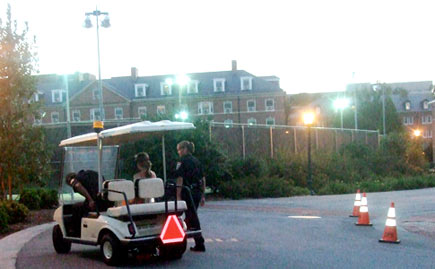 A Shot at Driving Drunk

Aside from the RA standing awkwardly behind a fold-up table covered with several boxes of Oreos, an assortment of veggie and fruit platters and a ream of Solo cups with no drink cooler, I was the first to arrive at what promised to be a fun lesson on drunk driving one recent September day. Judging from the slack attendance, I figured that maybe I was the only sucker who thought strapping on some beer goggles — which cause dizziness and blurred vision — and taking a quick spin around Cobb traffic circle in a golf cart was a fun idea.

The RA introduced himself as Andrew. We were saved from small talk by a triage of his friends. Promising all of the benefits that come with Durham Public Safety’s golf carts, beer goggles and free engraving services, Andrew convinced them to stay.

The boys looked as if they were from an alternative world. The ringleader had shaggy, brown Afro-esque curls that fell around his face like a wet mop, and he wore a plaid button-down shirt. A yellow-banded nametag hung around his neck and glasses perched on the tip of his nose. Another boy named Eli and the third, whom I’ll call Stripes, based on his light blue shirt design, clustered around Plaid, like moons orbiting a small planet.

“I would like to point out, this event is not going to teach you how to drink and drive,” Andrew said, as if clearing potential confusion.

Eli laughed and straightened his posture to mimic the stiffness of a cop. “You are five-shots certified,” he said, in a voice much deeper than his normal register.

My watch read a quarter past seven, a full 15 minutes after the event was supposed to start, but still no DPS. No golf carts. And definitely no beer goggles.

Still, like most college events, where two or three are gathered, more are sure to follow. Soon several others, including a rather large, sloppy girl wearing a shirt that said “Raisin Hell,” depicting raisins doing just that, also joined our waiting party.

“So did DPS get a flat tire?” Stripes asked, glancing at his watch.

We heard a groaning engine and looked toward the street, expectantly.

Andrew squinted. “Are they undercover as” — a forest green SUV, blaring country music pulled up — “as college students?” he asked.

The driver of the SUV did a quick loop around the parking lot, banging his head and slapping the steering wheel, before zooming off. A girl with long, curly blond hair slumped in the passenger seat, apparently intoxicated. “The irony,” Plaid muttered.

More students had gathered, making us a party of about 15.

“I love how you said, ‘The drinks will be here soon,’ when we first got here,” Stripes observed. “When’s ‘soon?’ ‘Cause I’m thirsty.”

As if on cue, another RA, staggering under the weight of a full water cooler, walked up the driving circle.

Plaid laughed, pushing his glasses up the bridge of his nose. “He brought the keg!” he cried in mock excitement.

Andrew filled a Solo cup and downed it like a shot. “Lemonade,” he said, smacking his lips.

And with the drinks, came the police. They arrived in style, a cop car escorting the rickety golf cart with two tall stacks of orange cones in the back.

“Yay, we have a program!” cried Andrew.

The policeman driving the golf cart hopped out and waved to the crowd. He was a middle-aged African-American man with a balding head. He held a massive pile of brochures about the dangers of drunk driving in one hand and a black suitcase in the other. He set the suitcase on the table, opening it to reveal several sets of beer goggles.

“They basically give you the feeling of what it would be like at the legal limit,” the policeman explained, passing the goggles around. “Case in point, just the other night a gentleman was driving down South Columbia, going the wrong way against traffic and almost crashed head on with the sergeant.”

“What an ass,” from Raisin Hell.

“So today’s education is to get you thinking about what it’s like driving under the influence,” continued the policeman.

From the tone of his voice, I could tell that this speech was rehearsed. The little incident on South Columbia probably happened five years ago.

While the rest of us fingered the goggles and jockeyed in line for the golf cart, the policeman set a path of cones near the driving circle. Plaid was the first one up. He snapped on the glasses and ambled to the golf cart like a pro. He drove around the cones once, twice, and then headed around the driving circle. He actually appeared saner with the glasses on than off.

Stripes suggested that Plaid should market his impressive drunk-driving skills.

Plaid handed the beer goggles to Andrew, who hesitated only slightly. “I don’t want to be the first to mess up,” he said, even as he put them on.

Andrew stumbled to the golf cart, banging his knee on the open doorframe.

“If he comes at us, we should run like hell,” Eli said.

“No lights, no signal. He’s a madman,” Plaid said, shaking his head.

“Definitely not as good as you,” Stripes conceded.

Andrew parked the golf cart and tripped over his own feet getting out. “The driving was the easiest part,” he said, giving high-fives all around.

Somehow, I ended up with the goggles.

Although we were only driving golf carts, I must pause my narrative to make a suggestion to all current and future RAs scheduling an event like this one: You should probably check driver’s licenses. You see, not only do I have no experience driving drunk, I also have no experience — or at least very limited experience — driving at all. I am 20 years old, and I just got my driver’s permit last month.

“Press hard on the gas to start it,” the policeman directed from the passenger’s seat.

I imagined gunning the golf cart into the bushes. Policeman overboard! Could I go to jail for causing harm to a policeman while under the influence of … beer goggles?

I promptly ran over two cones, rounded the first bend and ran over yet another.

“You just killed three people,” the policeman said, wiping his eyes and shaking his head. He was almost smiling.

And then the engine stopped. “Keep going,” the policeman told me.

“They weren’t real people,” the policeman said, a note of encouragement in his voice. “Just try again.”

He jumped out to survey the damage. Sure enough, all three cones were still under the golf cart. Apparently, if I ever drink and drive, I won’t be accused of a hit and run. More like a hit and drag.

“Improvement,” the policeman told me, as I got out.

I couldn’t get the goggles off fast enough.

A girl named Elena grabbed the goggles, gunned the engine and ran over the entire first line of cones — six in total, already more than me — on the first go-around.

She took the turn on three wheels, almost hit a passerby (real, not cone — and deathly pale), and flew onto the curb and into the bushes. She back-flipped from the golf cart, as the policeman looked on helplessly. From the sidelines, we held our collective breaths. But a moment later Elena popped up, a large grin on her face.

“That was fun!” Elena oozed, receiving much applause and laughter.

“Nice going, Elena,” Plaid said, slapping her back, as the policeman escorted her.

The policeman did not let her try a second loop.