If Cinderella Traveled to Singapore 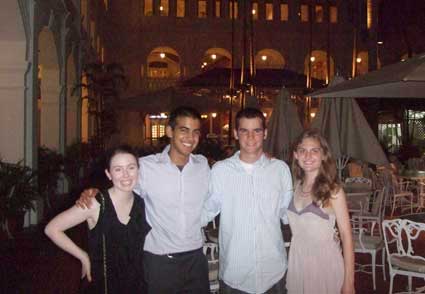 If Cinderella Traveled to Singapore

I’ve never been good at making bucket lists. There are so many things that I want to do in life, but I never take the time to write them all down. Usually, the places I want to go and the things I want to do come out in casual conversation but never actually make it to paper, which means that I’d be better off creating a retroactive bucket list so that I could actually check things off. Counterintuitive? Maybe. Satisfying? Definitely.

The opportunity to return to Singapore with the Carolina Southeast Asia Summer Program only a year after my first visit called for some diligent list-making. At the top of that list was riding the Singapore Flyer and ordering a drink at The Raffles Hotel. Doing a combination of the two? That would be a Cinderella dream come true.

Friday evening, my friend Leeann Chen, who is also traveling with SEAS, and I made our way to Marina Bay, to go on the Singapore Flyer, the largest observation wheel in the world. (It’s almost 100 feet taller than the London Eye!) We arrived around 8 p.m., just as the lights around Marina Bay flashed into life.

From our glassed-in perch we could enjoy the bay’s view, including the Sands Hotel, a two-building hotel with a rooftop boat connecting them and offering an un-obscured view of the city from its infinity pool; the Esplanade, a performing arts venue shaped like a durian; the purple-lighted Helix Bridge with red and green AT and GC lights to guide your path; and the Merlion — that’s half fish and half lion — Fountain spouting water from its mouth. During the 30-minute ride we barely even noticed the traffic whizzing beneath us. In fact, except for the ever-changing scenery, I couldn’t even tell I was moving.

A fairy godmother surely looked after my plans for the evening; after the Flyer, I headed to the Merlion Fountain, where I was to meet several friends to head over to the Raffles Hotel at 9 p.m. I was late, they were later, and our plans proceeded without any further glitches.

And so the Raffles Hotel, a colonial 19th century-style hotel, which has welcomed the likes of Rudyard Kipling, Queen Elizabeth II and Michael Jackson, now also has hosted four incredibly talented SEAS students. We approached the three-story white columned front in awe. A butler in extensive regalia was busy helping a well-to-do family from a Mercedes Benz taxi. We’d walked to the hotel, so we didn’t receive much notice.

I asked for the location of the Long Bar — apparently the only venue where people who can’t afford to pay at least $671 a night can take a peek at the historic venue from the peanut shell-covered floor of a casual-styled bar. As we were not escorted inside, we luckily never found the Long Bar until we’d stumbled across yet another bar — this one in the Raffles Courtyard, surrounded by tall white columns and filled with fanned palm trees, frangipani, orchids and bougainvillea in bright orange, red, pink and white shades. (Turns out, not having a horse-drawn carriage comes with its benefits!)

We took a seat and proceeded to empty our wallets and order Singapore Slings. Each glass of the national (pink!) cocktail cost over $S30, or the equivalent of half a week’s worth of satisfying Hawker Center fare. But the drink — which includes gin and cherry brandy, as well as pineapple and lime juice and a menagerie of other liqueurs — and is served with a slice of pineapple and a cherry, was well worth the expense.

To be sitting in the lap of history, surrounded by balconies graced by such people as Ernest Hemingway, Ingrid Bergman and Elizabeth Taylor! To be sitting at perhaps the very umbrella-covered tables as Beyonce Knowles and the Black Eyed Peas! To be enjoying the same views as countless international royalty and dignitaries!

For the duration of one drink, we could revel in the significance of our surroundings. We could smell the gunpowder that in 1902 made the tiger extinct in Singapore, after it escaped from a showcase and made a short guest appearance at the Long Bar before a patron shot it between the eyes. We could see William Somerset Maugham, the English playwright and novelist, sitting under the frangipani as he worked away at a draft in the early morning light. We could overhear Peter van Stein Callendels, the well-known Dutch archaeologist and a regular guest at the hotel, proceed to order every dish off the menu and then repeat the process in reverse order.

As we polished off our drinks, we adjourned to the Long Bar, where, sure enough, peanut shells littered the floor. A beautiful view of the street fell below the terraced porch, but as we walked back down the stairs and passed the white marble floors to the front of the hotel, we were only too happy that our fairy godmother had changed our plans.

The evening proceeded in perfect bliss, walking past St. Andrew’s Cathedral, which is part of the Diocese of Singapore, and towards the Marina Bay area, until we realized that the night — or rather the weather — was in fact too perfect. The heat and humidity had lifted, unusual even around midnight in Singapore. So we hopped into a taxi just as rain pelted the streets. We would have been a sad show — four students in their best (now dripping) attire under the protection of an undersized UNC umbrella. But even the downpour could not wash away the magic of the evening. It clung to the air and carried us swiftly back to our castle, which is just so aptly named Prince George’s Park.