Student Blog: In the Heat of the Fight 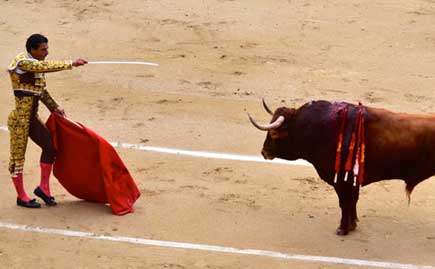 In the Heat of the Fight

I came to Madrid with the intention of seeing a bullfight. I actually purchased my tickets to the Plaza de Torros before I purchased my airline tickets. I didn’t expect to enjoy the fight. Gore has never been something that particularly interested me. I never minded dissecting frogs or small mammals in biology class, but, then again, they were already dead when I started cutting into them. So when I entered the gates of Plaza de Torros for my first bullfight, I expected hot sun, bad seats (I’d bought some of the cheapest available) and lots of blood and nausea in my immediate future.

Two hours and six bulls later, I was dragging my feet leaving the stadium. I had loved the fights. Not for the blood. Not for the deaths. But for the artistry with which each fight played out. I loved the swish of the cape, the cocky jaunt of the matador and the undaunted determination of the bull even in the face of death.

But I should backtrack. Why would a 21-year-old college student travel to Spain for a bullfight that she didn’t expect to enjoy? After studying abroad with UNC’s Honors Semester in London program, I decided to extend my travels, following Ernest Hemingway’s path from journalist to novelist. I’ve always admired the author’s succinct writing style and bravado. Now, I wanted to experience it firsthand by retracing the author’s footsteps through Spain, Italy and France. And the best way to understand Hemingway’s character and style was to return to some of the places he went — to write in his favorite cafes, to wander through galleries filled with the art of his friends and contemporaries, and, of course, to watch a bullfight. 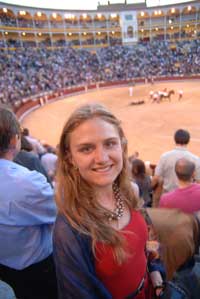 Madrid was the place to do it. That’s what Hemingway said, at least. In Death in the Afternoon, published posthumously, Hemingway wrote that Madrid provided the ideal venue for a spectator’s first fight. Before arriving in Madrid, I’d studied the fighting schedule carefully and reserved my ticket. I hadn’t yet finished Death in the Afternoon, so I wasn’t privy to Hemingway’s advice regarding the perfect seats. Instead, I chose my seats based on price. Seats in the partial sun were cheaper, so I brought a hat.

When I entered the stadium, I immediately fell in love with my surroundings. The arena: thick and heavy with excitement. The crowded stands: stuffed with locals studying their programs and anticipating the best fights. The horses: parading around the stands in full regalia. The fights were about to begin!

I did not need a hat. And I used my sunglasses for a grand total of five minutes. I may not have had a box seat, but I still had a great one: close to the ring and surrounded by local spectators who take the fights seriously. They came early and conversed with one another over foil-wrapped bocadillos con jamón and bought beer in the can from the vendors who walked up and down the stands in the two minutes between one bull being dragged from the ring and the next entering. They cheered and jeered, depending on the skill of the matador and the bravery of the bull.

“Torro aburrido” (“Boring bull”) one man complained, alluding to the beast’s hesitancy to charge, and, later, “Ya tengo hambre” (“I’m already hungry”) and “Quiero ir a mi casa” (I’m ready to go home”) when the fighting lagged. (Later, upon finishing Death in the Afternoon, I discovered that Hemingway actually suggested these seats for first-timers. I guess he enjoyed the hometown ambience, too.)

Every move of the first fight surprised me. I’d never watched a bullfight and did not understand the rules. Luckily, the woman to my left took me under her wing and explained the ins and outs of bullfighting to me in Spanish. Three matadors each try their hand at two bulls during an encierro, or running of the bulls — the name given to a bullfight. The bull enters the ring and matadors-in-training bait him into fury, swishing brightly colored capes in front of his eyes, then dashing behind posts when he charged. The matadors-in-training also use bandillas, or long arrows, that they shoot into the back of the bull to irritate and weaken him. As the fight persists, judges are keeping tabs — fighters who throw their bandillas and miss the bull hurt their team.

Next come the picadors, riding atop fighting horses. In this round, confusion reigns. Your sympathies are split in all directions. The picadors, sitting atop the horses, poke and prod the bull into a bloody fury, aligning you first with the bull. The bull, recognizing the horse and picador as one entity, charges into the horse, ramming his horns deep into the horse’s fleshy underbelly. Sometimes the horse topples over, other times it simply tilts to one side, its legs kicking furiously. Always the horse is injured. Immediately, your sympathies turn to the horse. You hate the bull. You suck your breath. You just know the horse has died even though he usually doesn’t. “The horse never dies,” the lady next to me says.

And the horses didn’t. The horses survived all six fights.

“El inglese,” a man nearby rolls his eyes. “The English, always worry about the horses.”

But you’ll worry about the bullfighters, too. They are human, after all.

By the third or fourth fight, I’d caught onto the rules. By the sixth fight I was ready to buy tickets for the next one. Hemingway wrote that those who leave the bullfight disgusted, came to the fight ready to be so. I too came with preconceived notions. But I left them at the gate.

So if you ever go to Madrid for a bullfight, here’s what to expect: In the heat of the fight, you will lose yourself to the encierro. To the grace of the matador. To the sacrifice of the horses. To the bravery of the bull. In one moment, you can appreciate them all, love them all, root for them all. And yet all the time, you know what will happen. The outcome is almost guaranteed from the start. Almost always, unless there is some tragedy of errors, the horse will hobble from the arena. The matador will plunge his sword into the bull. And the bull will die.

The bull will always die. Even in the offhand chance that he kills the matador, the bull will be killed after the fight. It has to be this way. If the bull killed the matador and lived to see another fight, the next matador, too, would surely die. Once the bull has learned to kill a human, it can do so again and again quite easily. In the old days, bulls that survived were repeatedly used in fights. Matadors left the ring defeated as often as the bulls do today. So nowadays, the bull’s fate is known before he even enters the arena.

The bullfight is not a fair fight. Unlike most sports, bullfighting is not watched to determine an outcome. Rather, it is watched to see how the outcome is determined. Each fight is fought differently and can never be repeated. Some bulls are bigger. Some are stronger. Some are braver. Just like the matadors against them. There are no rematches as in football or basketball. No do-overs. Just one good fight.

I left the arena with a deeper understanding of a longstanding passion — a passion common to Spain and to Hemingway. And as I left, I felt not so much a passion for the sport myself but a deep appreciation for having the opportunity to take part in it. For a bullfight is about much more than the bull and the matador. It’s about the people surrounding them, too. It’s about the bocadillos con jamón, the canned beer, the gentle jabs. It’s about a community coming together around a centuries-old tradition. And in the heat of the fight, I was swept into the passion — into the community — as well.