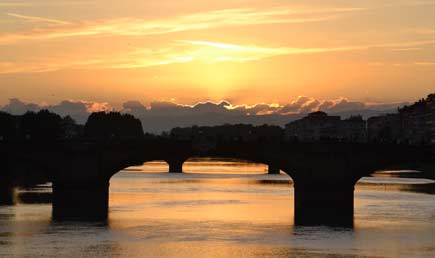 Some places I’ve traveled I remember for the sights – picturesque views from hilltops, gorgeous domes and cathedrals, sunsets in bursts of rose and orange over the water. Florence has all of that, but I remember Florence for its people, especially Pietro.

We met at a gelato festival, as I was unsuccessfully deciphering my map to determine the route to the Uffizi, a fabulous art museum. An old man with short-cropped, white hair, large reddened nose and glasses like my grandfather’s materialized before me.

Pietro’s smile shone as if he appreciated every moment’s beauty and wanted to share it.

I mentioned the Uffizi and presented my map.

I thanked him. Relieved of my duty to navigate, I enjoyed the scenery as we walked.

“I like to take tourists around my beautiful city,” Pietro told me, as we passed the colorful mosaic Duomo. “I have lived here all my life. But as I get older, Florence becomes more beautiful in my eyes.”

We approached a small church.

“Let’s go inside?” he asked. “I want to show you something very beautiful.”

From the outside, it had looked like nothing special. Inside I beheld intricately carved marble columns, inlaid marble floors, and a bronze fountain with a cherub playing the harp.

“Botticelli!” Pietro said, proudly. “Can you believe it? Most tourists miss this, so I took you here.”

We admired the fountain. Then he was off. So much to see!

An hour into our walk, I gave up on the Uffizi realizing I’d prefer to see Pietro’s city through his 75 years of acquired admiration. I spoke little Italian, and Pietro’s English was only five years in the making, but he had an aura that kept me close.

Pietro pointed to a series of skywalks connecting many of the old buildings. “The work of the Medicis,” he told me. “Have you heard of them? Very important family in Florence.” He proceeded to recount their incredible contributions to art, politics and every other element of Florentine culture.

“Florence is the most beautiful city,” he exclaimed as we continued through the Piazza della Signoria. 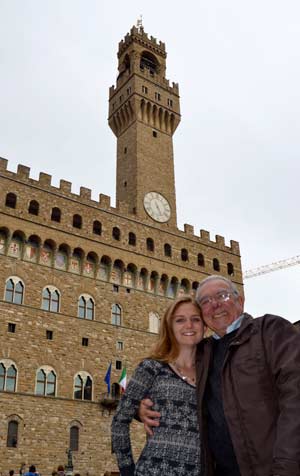 Pietro pointed to the replica statue of Michelangelo’s famous David. “One of two copies,” he said. “The better of the two. The other is on top of the Piazzale Michelangelo and quite ugly, but the view from the Piazzale – what’s the word? Italians say ‘Magnifico!’”

“Magnificent?” I suggested the obvious.

He shook his head, shrugging. “No, in Italian it’s more than that. But ‘magnificent’ will do.”

Pointing to a number of other statues lining the piazza he named each artist and told me, “These are the real works of art in the city.”

“They appreciated beauty back then,” he said. “Every job was important: artist, waiter, garbage collector. Everybody played an important part in making the city beautiful. It’s still that way here, but not so much.” His eyes became sad. Then he brightened. “They gave us the art we have today. They’re still with us. We’re still inspired by them.”

“At the Uffizi,” he said. “You wanted to visit today?”

He checked his watch: an hour ‘til close. “I’ll go with you, show you the highlights.”

Without Pietro, I’d probably still be aimlessly wandering those hallowed halls, overwhelmed by all there is to see. I got the Chevy Chase tour of the Uffizi. Pietro clipped an incredible pace with a bad knee after “planting 100 tomato plants this morning.” Determined that I wouldn’t miss anything, he parted the clustered crowds with a wave and a smile.

Titian’s Venus of Urbino. Leonardo’s Annunciation and Adoration of the Magi. Bronzino’s two-sided The Portrait of the Dwarf Morgante. Lippi’s Madonna and Child with Angels. Caravaggio’s Medusa, Bacchus, and the Sacrifice of Isaac. Michelangelo’s Doni Tondo. Every big-name Italian artist seemed to have an entire hallway. Then –

“Beautiful!” Pietro wiped his eyes. “You had to see Botticelli.”

“I’d like to thank you,” I said, when we’d completed our tour, my mind still reeling with art magnifico. “How about a cappuccino?”

He suggested Caffé Rivoire. “I’ve been going there since my school days,” he told me.

Upon arrival, I looked for a table.

I worried about his knees.

He reminded me of the 100 tomato plants this morning. “I can stand for coffee.”

The bartender knew Pietro, of course. I got a cappuccino. Pietro ordered “black” coffee in a tiny glass cup and half-filled it with sugar, sipping quickly. His wife would be expecting him for dinner.

We parted at the bus stop.

Kissing my cheeks, he boarded the bus and disappeared.

I lingered at the bus stop sign long after he departed. If I left, I’d wonder if that afternoon had even happened.

Afterward, I decided to hike to Piazzale Michelangelo, where Pietro’s least-favorite David stands. I wanted to look down on Pietro’s beautiful city, watching the sun set in peaches and plums against the skyline.

Instead, I got hopelessly lost. Wandering aimlessly along the hilltop, I was on the verge of giving up, when I almost ran headlong into a guy about my age.

He introduced himself as Emmanuel. He was also looking for Piazzale Michelangelo. With his better map, we arrived as the sun set, washing Florence in golden rosewater. We spent the rest of the evening together. Over fettuccini, we marveled at the timing of our meeting. “Just 10 seconds in either direction and we’d never have met!” he said.

First Pietro, then Emmanuel, even the glorious sunset forever casting the city in gold upon my mind. So much beauty. And just 10 seconds either way, and it might never have been. 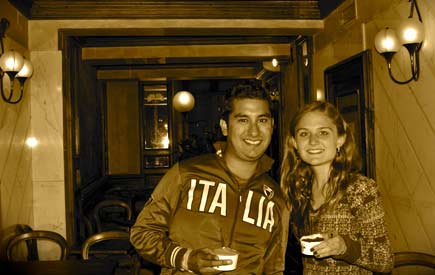