Student Blog: My Day with Simon 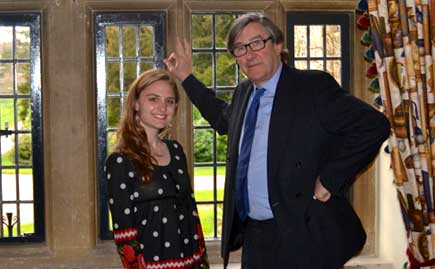 My Day with Simon

The charms of Chawton brought me back to Jane Austen country, this time because Simon Langton, the director of the famed 1995 BBC miniseries Pride and Prejudice was giving a lecture about the film. I had discovered the lecture while leafing through pamphlets on the train ride home from my first visit to Chawton — a delightful day spent in a writing workshop in Jane’s home. What luck! The lecture would be held just two days before the Honors Semester in London program ended. I secured a place at the lecture immediately, and even got the last spot (someone dropped out at the last minute) at the 25-person dining room table for dinner with Langton afterward. The director had also agreed to a personal interview: the perfect way to answer the last outstanding questions for my research.

I arrived in Alton in the early afternoon, just in time to explore the church where Austen worshiped and the graveyard behind it, where her mother and sister are buried. Then I headed to Cassandra’s Cup for a cream tea and ducked into Jane’s side garden to work on my interview. The flowers were bright with blooms, and as I scrawled down questions, I could feel the writer’s presence urging me along.

From Jane’s gardens, it was just a short walk down a side road to Chawton House Library, which is the former home of Edward Austen Knight, Jane’s wealthy brother and the former head of the estate. The estate was about to be demolished in the early 1990s, but Sandy Lerner of Cisco Systems saved the house from decimation and converted it into a women’s writers library, a truly unique endeavor comprising much of her own personal collection.

As we walked through the house, I imagined Jane strolling down the same halls. Coming into the dining room, which was ornately set for the evening’s dinner, we were told that Jane herself had dined at that very table. A portrait of her brother hung nearby. I tried to imagine where Jane sat and wondered if later that night I would be sitting nearby, or perhaps in her very seat. Scenes of countless Austen films with the characters talking animatedly around the table flashed through my head.

My interview was scheduled for later that afternoon, so while I waited, I went into one of the neatly furbished reading rooms. The librarian had pulled a number of books that would be of interest for my research. And I’d made one special request: to read the Victorian edition of Pride and Prejudice, a gorgeous golden peacock pluming on the front cover. Gingerly, I turned each page, careful not to rip the precious book. The cover was already coming apart at the seams, but the words on the page seemed to read so much better from such an antique version.

And before I knew it, I was being called to meet Langton for our interview. To my great excitement, I was told that the location of the interview had been moved — from the Great Hall, where the lecture would be held later that night, to the Oak Room. On tour, we had been careful not to touch anything, but as I shook hands with Simon and pulled out my recorder, we took a seat around the large oaken table and Simon drank a cup of coffee. At first, Simon was the one interviewing me. “So when did you first watch my movie?” he asked with interest.

No exaggeration, when I was little, my parents could pull me away from birthday parties and excursions with friends with the promise that Pride and Prejudice was playing on A&E. I told him so. He was stunned.

I shrugged. “You introduced me to Austen,” I told him. “I guess you can take credit for this whole project.”

Thus, our interview began, and, like all good interviews, the next hour went more like a conversation than a one-on-one. We talked about his inspiration behind the film, picking film locations and his own interpretation of what many consider to be Austen’s greatest work. The interview only ended when he was pulled away to get ready for the lecture.

I only had just enough time to dip back inside the library for another chapter of Pride and Prejudice before changing into a nicer dress for the evening’s activities. A cocktail party ensued before the lecture. I’d looked forward to wine and hors d’oeuvres before I suddenly realized that I’d come alone and knew no one but Simon — and he was still preparing. But, contrary to stereotype, I’ve found that many British people are quite friendly on first meeting. (I think the stereotype stems from Londoners, who, like most city folks, are too busy catching the next train to notice the person beside them.) Two women, both from Alton, snapped me up in a hurry, and I never left their side, all the way into the Great Hall, where they managed to get me a seat right beside them.

Simon was as animated on stage as he was around the oak table. In fact, I felt that the lecture was really just an extension of the conversation we’d had earlier. He showed clips from the film and talked at length about the famous “lake scene,” where Mr. Darcy takes a dip in the pond. “It was actually a pool in the studio,” he said and went on to describe how Colin Firth’s stunt double (that’s right, not only was it not the real lake, it wasn’t the real Darcy either!), got injured swimming during one of the takes.

And before I knew it, we were sitting around the dinner table. I found myself in a place that happened to be right across from Simon.

“Where do you think she sat?” mused the lady to my left — grand woman in size, voice and interest in the world. She was talking about Jane, of course.

“Well, let’s see,” said the lady to my other side — a woman of miniature features and the only one in the lot to take her tea without cream. “An unmarried woman of undistinguished birth and rank. Certainly nowhere near the head, no. Hmmm. … Far down the table, certainly. I’d guess somewhere just about in the middle.”

We sat in the very center. We made no further inquiries.

Despite knowing no one, I was never at a loss for conversation. In fact, between the ladies on either side of me, I hardly had time to talk with Simon. Over poached salmon and steamed vegetables, we talked about my time in London, their jobs (one was a former lawyer turned landscape design writer, the other a retired math professor), and of course our shared love of Austen’s works.

“Look at us,” said the writer. “All 25 of us, most of us don’t know but maybe one other person. We all come from different places, backgrounds, careers, ages. And yet, here we are all together having a great time, with just one thing in common: Jane!” I do think Jane would have enjoyed the evening, and certainly the diversity of people with whom to talk and mingle.

Following dessert — a grand lemon tart with raspberry drizzle — we were served tea. The lady sitting beside Simon offered to swap places with me for the duration of the drinks. This was partially a very generous offer and partly self-motivated. You see, I had befriended the women to my left and right, and the poor lady across from me had been deprived of conversation all evening; the woman to Simon’s left had hooked him into a conversation that had somehow rambled from her job to her love of dogs without a moment’s hesitation. Still, I was grateful for the offer, and we both switched places happily; she finally had people to talk with and I was at least next to Simon listening to the saga of the lost dog. But soon the conversation opened — we came full circle to Austen and everyone was satisfied.

The evening concluded all too soon, or maybe just in time. I had just enough time to exchange emails with Simon and get a kiss on both cheeks before dashing to the door to meet my taxi. I realized only as I grabbed my bags that I’d never actually told the cab service where to meet me. Luckily, the taxi was right outside the front door. I needed 15 minutes to get to the station, and I had exactly 10 minutes to catch my train. If I missed it, I’d arrive in London just as the Underground station closed down.

But as I got inside the cab, I knew that I’d get there in time. I recognized the driver as the man who had driven me to Alton during my first visit. “Emily!?” he said with a laugh.

I’ve mentioned before that Alton is a small town.

“We’re a little close on time,” he said, offering me a bag of Skittles. “But they don’t call me 10-minute Kit for nothing.”

We sped through town, chatting all the way. I had a lot of news since my first visit to Chawton.

“You come back again now, Emily,” he told me, as I bolted from the door. “I’ll miss our conversations.”

I turned around and returned the compliment, meaning every word. Rushing up the staircase to the station, I arrived on the platform with several minutes to spare. I thought of Cinderella’s carriage turning into a pumpkin. Just in time, I thought. And, indeed, I truly did feel like a princess. But when you spend the day in Alton — and with Simon in particular — you’re bound to receive royal treatment.