What to Expect When You’re Accepting 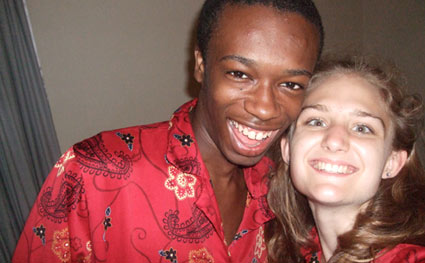 What to Expect When You’re Accepting

For months leading up to the Carolina Southeast Asia Summer Program, I had heard of the great wonders of the Thai massage. So when we arrived in Thailand, I knew that I wanted to get one, although I didn’t really know what that entailed. I’d heard something about wearing one-size fits all pajama pants and the importance of requesting a group room. And I’d even heard rumors that the masseuse would flip you over her back at the end of the massage. But other than that, I didn’t know what to expect.

You see, I hadn’t had time to do my research. I knew that I wanted to spend my Saturday afternoon in Bangkok, but once I got there, I didn’t know what I wanted to do. Spontaneity would rule the day, and plans were out the window.

So when I wandered into a salon in Bangkok with two other SEAS participants, Max Cullen and Daron Holman, to request a Thai massage, I really had no idea what I was getting myself into. And judging by the small stature of the three women who greeted us at the door — all dressed in flowing yellow pants — I was a little worried about that potential backflip at the end.

We asked to see a menu of massage offerings, some of which included facials and hot stones, but we were set on the full Thai massage. The only problem was that it would last two hours. But after a little negotiating and a lot of smiling, we managed to split the cost and time in half.

The masseuses began by washing our feet. Then we followed them into an upstairs room, where we changed into bright red pajamas and lay down on our backs. They started with our toes and worked their way to our temples, kneading the balls of our feet, pushing their legs against our thighs, pulling our fingers, stretching our arms over our heads and ending with a fantastic back crack (without any hazardous flipping involved).

The only downside to getting a group massage is that you have a tendency to compare what you’re getting to the people beside you. Do I have the best masseuse? Why isn’t she popping my toes yet? Am I as relaxed as my neighbor? Of course, these questions stop about three minutes into the massage when you relax into a semi-comatose state, your eyes begin to flutter and you wish you’d paid for that second hour. (I also realized just how glad I was that I’d come to Bangkok without any agenda. The end result was so good that I now plan to NOT make a plan many more times while I’m in Bangkok. I’ve found that accepting opportunities as they come along often yields great — and relaxing — benefits.)

Our massage came on top of a jam-packed morning touring the Grand Palace and several temples, including the Temple of the Emerald Buddha (the Buddha was actually made of jade) and Wat Pho Chetuphon, which houses a gigantic golden reclining Buddha with feet decorated with inlaid mother of pearl. (Coincidentally, the Wat Pho is also the birthplace of the Thai massage.) Then we’d spent several hours in the Museum of Siam learning about the complications of Thai (or is it Siamese?) identity. So you can imagine the state of our aching limbs when we arrived at the salon.

As for the pain I’d worried about, it was minimal, although early on, I suddenly feared needles might be involved. This resulted from a sharp stinging sensation that pulsed first through my feet and then up both legs. A small light came on, and I realized that my masseuse was observing my skin with her iPhone. When she started laughing, I realized my mistake. The pain was not from needles at all but rather from her fingers pressing into dozens of mosquito bites grouped around my ankles. We both laughed and the masseuse said something to her partner in Thai, which I can only imagine had something to do with the state of my heavily bitten legs.

As I dozed in and out of consciousness, I remembered something that we’d discussed as a group earlier in the day when we toured the museum: No two Thai (slash Siamese) are the same. And so, as the masseuse folded my legs like a grasshopper and kneaded kinks out of my back that I didn’t know I’d had, I came to the realization that no two Thai massages are the same, either. Each masseuse had her own version of the massage. And so as my massage came to a close and we enjoyed hot tea (from NASCAR teacups depicting Dale Earnhardt Jr.) with our masseuses in the front lobby, I came to a second conclusion: It would be improper, rude even, to define the Thai massage based on a single experience. I guess I’ll just have to get another one (or two or three) before I can fairly judge. I’ll keep you posted.