Two Movie Tickets and a Plate of Chicken Rice 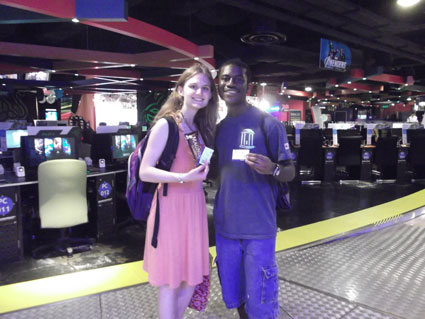 Two Movie Tickets and a Plate of Chicken Rice

I’m possibly the biggest movie buff you’ll ever meet. I could spend an entire day in the theater, if the nice people at the cinema would let me. In fact, on several vacations, I actually have bought a handful of tickets and camped out all afternoon and into the night. Action, comedy, chick-flick. As long as it’s not horror, I’m pretty sure to see it. And that’s why, when I traveled to Singapore with the Carolina Southeast Asia Summer program (SEAS) this year, I knew going to the movie theater would be a top priority.

Honestly, I didn’t expect the movie-going experience to be all that different that in the States. Was I wrong. I met my friend and fellow SEAS participant, Calvary Diggs near Orchard Road, where a Singaporean friend had suggested that we go to Cathay Cineleisure Orchard. At nine stories tall, this complex took entertainment to a whole new level. Upon entering we were met not with the typical aroma of freshly popped popcorn (that was there, too), but with a vast array of culinary delights, from chicken rice to gelato.

We couldn’t just walk up to the ticket counter and buy our tickets, either. We had to go up five floors, where we were presented with a screen displaying all remaining available seats in the theater. We selected two and were given tickets allocating those two exact spaces. No hustling to get seats next to one another. Going in a large group would be a breeze. I grabbed a Magnum Bar to snack on (a rather elementary mistake as ice cream melts, so my snack lasted through the previews and I was finished by the opening credits), and then we proceeded to the top floor, where one of the two theaters on that level was showing Snow White and the Huntsman, our movie pick of the evening.

But first, we had to queue, or wait in (several) lines for the elevator, and then, when we did finally arrive (the whole movie-going process had been rather more extensive than we’d planned, so at this point we were hustling to make it before the previews ended.), we were met, not with the door to our theater but with an entire video game room and yet another concession stand. Apparently, Singaporeans take their snacking and leisure time seriously.

Each theater was guarded by several men in uniform (teenagers would be hard-pressed for any questionable double-features here), and the theater itself was quite small, with one aisle separating about 10 rows of five seats on either side, but the size of the theater didn’t seem to matter, for few people were actually seated.

When the movie started, I figured the surprises had ended. Instead, we were met with Mandarin subtitles. And then, about halfway through the movie, the audience finally arrived. That’s right, Snow White was already lost in the enchanted forest, her huntsman madly in love with her and the evil step mother lurking in the trees by the time half the viewers finally deigned to show up. (As for the other half, most of them were on their cell phones, texting through the dramatic scenes anyway.) But no one seemed to be in need of any CliffsNotes. Maybe the subtitles helped, but the other viewers seemed better in touch with the plotline than I was and pointed out the seven dwarves before I’d even equated the short men with beards to their Disney counterparts.

Orchard Road was still bustling when we left the cinema around midnight. But with the Mass Rapid Transit (MRT) closing in a few minutes, we hailed a taxi back. Our cab driver never spoke. Maybe he was listening too closely to my conversation with Calvary. After all, how often do most people have the opportunity to hear two teenagers talking animatedly about a bunch of dwarves and a princess who mistakenly ate a poisoned apple? Of course, most of the conversation didn’t revolve around the movie itself; we’d found our entertainment not so much in Snow White and the Huntsman, but rather in the culture of Singaporean cinema. Next time, I think I’ll order a plate of chicken rice with my movie.