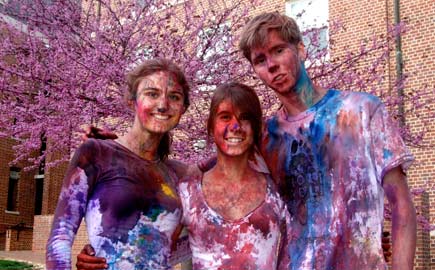 Holi Moli! What a Celebration!

A cloud of pink, orange, blue and green burst over Polk Place last Friday afternoon, as more than 2,500 students celebrated the coming of spring by hurling paint at one another. I was one of those students crowded onto the tarp-laden quad for the fourth annual Holi Moli, UNC’s commemoration of the Hindu festival of Holi. From afar, the scene was magical: multi-hued smoke engulfing a sea of students and transforming Wilson Library into a Disney Castle.

But up close, it was a paint-flinging war zone. With tubs of water lining the lawn and with every student armed with at least one packet of powdered paint in a variety of different hues, no one left the field unscathed.

I’d missed Holi Moli last year, but after hearing my friends’ stories, looking through their pictures on Facebook and then traveling to India this past summer, I couldn’t give up a chance to take part in such a vibrant tradition.

Meeting up with (or maybe I should say, throwing paint at) a group of friends who had all studied in Asia with me last summer, I couldn’t help think that we’d always feel connected over a packet of Holi paint. For as we threw handfuls of yellow, purple, green and blue at each other’s necks, back, face, eyes (oops!) and mouth (double oops!), I couldn’t help remembering back to our hot, sticky days in New Delhi and Agra.

Taking a pothole-filled journey to a yogic hospital, where we sang rhythmic chants while tossing herbs into a fire pit and learned the art of laughing yoga from a world specialist.

And then to the Taj Mahal, where we wandered the hot grounds barefoot and open-mouthed, marveling at the sun’s shimmering reflection on white marble. Clapping and swaying to the rhythmic drumming of musicians inside Nizamuddin Dargah, as worshippers generously offered bills of rupees in ever-flowing streams. Sitting cross-legged, eating lunch from large tin trays, alongside thousands of veiled strangers at a Sikh Gurdwara, which serves food 24 hours a day to anyone and everyone willing to wait in line. Driving down the highway, five to a tiny green-and-yellow rickshaw, with one student hanging out of the window and only stopping for a cow in the middle of the road. Each memory was as colorful as the quad during Holi Moli. Each memory as tangible as the wet powder sticking to my legs, arms, neck and face.

And, so, I took to the quad with a packet of blue powder in one hand and a cup of water in the other. Before we began, I’d imagined that we’d all run to the center of the quad and start slinging paint, but there were so many of us, we just threw from where we stood. And then, paint flying, someone started beating the drums. And then everyone started dancing, pounding their feet against the tarp, twirling in place, bumping against a thousand other warm, paint-covered bodies.

Only an hour later, I could hardly recognize some of my closest friends. Which, of course is the point. The two-day Festival of Colors aims to peacefully (and artistically) break down social barriers, like ethnicity, culture and caste. We came to Polk Place last Friday a large assortment of students — from different backgrounds, races and social groups. Many of us were strangers, but that didn’t stop us from hurling paint (in powder, clumped or runny forms) at one another. Before 2,500 packets of powdered paint wafted into the air and showered us in a rainbow of colors, we had been easily distinguishable individuals. We left as a single painted canvas. Except for the fact that Carey had green hair and Liz had pink, or Taylor’s face was half-covered in red and Nicole’s chin was blue — except that some of us had more of one color than another — we all looked alike.

But forget the meaning behind Holi Moli, and you’re still left with a good time. After all, how often do we have the chance to throw paint at friends (and strangers!) and still remain quasi-socially acceptable?