What You’ll Find in the Forest: Notes from Trekking Through Erawan National Park 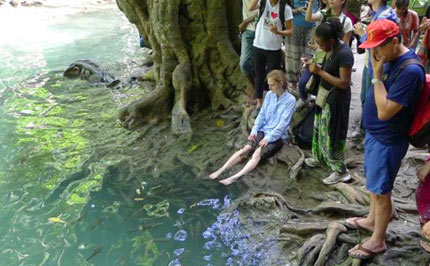 What You’ll Find in the Forest: Notes from Trekking Through Erawan National Park

After the hectic crowds of Bangkok what could be better than an escape to Thailand’s countryside? Better yet, why not really escape civilization for a few days with a trek in Erawan National Park? That’s exactly what the Carolina Southeast Asia Summer Program did for our last weekend in Thailand before returning to the U.S.

Now I’m not an outdoors person, but I’ve been known to enjoy a few days in the wilderness (especially when a shower — hot or cold — is at my disposal), so I’d been looking forward to our time at Erawan National Park. I was especially excited when I learned that the word “erawan” in Thai meant “elephant,” and I had visions of awaking to the nuzzling of a long trunk. (I later learned that elephants can be quite vicious and was thankful that I never even saw an elephant — let alone was awoken by one — at the nature reserve.)

Saturday morning we arose early for a hike to a seven-tiered waterfall. On the way up we passed a number of gorgeous trees, one with a thick vine protruding several inches from the trunk and providing support for the tree. Each ascending level was more beautiful, with the water cascading over large rocks and trees bowing over the falls. We only shared the view with the monkeys, who peeked from behind tall branches.

We stopped at the third tier to dip our feet in the water and for some free spa treatment via Garra Rufa. These fish feast on your dead skin, leaving your feet baby soft. While SEAS was in Singapore we’d seen advertisements for this expensive treatment and had watched enviously as more affluent Singaporeans forked over their credit cards and took their seats by large tanks filled with the flesh-eating experts. That had been one experience we’d had to pass up, so I was overjoyed to have the chance to try Thailand’s free version.

The fish tickled as they kissed my feet. I shrieked and removed them quickly, but then dipped them back in the water and persevered. It was well worth the initial discomfort, for when I removed my feet a second time they were incredibly smooth.

I shoved my wet feet back into my socks and shoes and continued the hike. Later that afternoon we piled nine people into a truck bed and took a rocky 30-minute ride up steep roads and past beautiful rolling hills and farm fields to a peak, where we stopped for a quick picnic lunch.

Then, we continued our hike, this time up over 500 stairs to the mouth of a large cave. The entranceway was quite narrow, dissuading several of our more claustrophobic companions from coming in. But once inside the cave proved humongous, our voices echoing off the stalagmite-covered stone walls. Our imaginations were illuminated in the eerie light of our kerosene lamps and iPhone flashlights, making the stone protrusions look like climbing turtles and bearded men.

Stalactites hung thick from the top of the cave, but we were more interested in the floor. Our guide ducked under a small fence surrounding the foot of the cave and hopped to the lowest level, his chest just peeking out from the surface. Then, dramatically, he raised his lantern above his head and slowly lowered it to the ground. The light went out and we were in complete darkness. And then came the glimmer of a very small light, from the top of his cigarette lighter. We watched as the light descended and then flickered out. Our guide told us that the depths of the cave contained little oxygen and were unable to sustain fire. Still, despite that danger we were reticent to leave the cave.

We exited back through the mouth of the cave, blinking in the bright sunlight. Another 30-minute truck ride over hills dotted with temples brought us back to the seven-tiered waterfall, where we changed into bathing suits for a refreshing swim under the cascading water.

Once again, I awoke early for our last morning at the national park, where my friend Pooja Kodavanti and I took a sunrise walk through the forest, watching the sun peek over the edge of the horizon from a comfortable seat in the dewy grass. It was the perfect end to our sabbatical from civilization, and then it was back to Bangkok for a whirlwind last few days in the city.