Holding Onto the Carolina Way 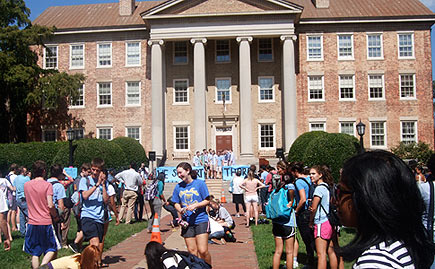 Holding Onto the Carolina Way

As the 21-member search committee meets today, Oct. 5, to look for a new chancellor, I’d like to remember the good that has come out of a sad resignation. Many of us at Carolina have realized the importance of presenting a unified front and of supporting and encouraging our University’s leaders.

I will miss Chancellor Holden Thorp’s guidance. I hope that our next chancellor will represent the student body, faculty and staff in a similar manner, striving to strengthen our identity as a research-oriented university while never forgetting the easily overlooked people who keep this institution running.

Two Fridays ago, several hundred students, faculty and staff converged on South Building to sign a long sheet of brown paper that lined the steps of the building and ended at the University’s seal. We asked Chancellor Thorp to stay.

I admire Thorp for his strong stance on keeping the University affordable for students as well as for his quick actions last year involving the mistreatment of University housekeepers. When the chancellor announced his resignation, I was shocked and saddened by the news.

The week before, as I’d passed the Old Well, I’d been stopped by a news crew and asked about yet another “black eye” on the University: the misuse of funds by University fundraisers, Matt Kupec and Tami Hansbrough. The reporter asked me if — considering the slew of scandals swirling the University — the “Carolina Way” had taken on a new definition. A blighted definition.

I said, “Absolutely not.”

For me, the Carolina Way is as former student body President Eve Carson defined it. When I think of Carolina, I think of azaleas bursting around the Old Well, sunny afternoons on the Quad and, more than anything, the excellent, dedicated and impassioned students who walk through campus.

These reporters — more interested in making news than reporting it — had tried their hardest to get a sound bite of me to call for heads. But I, like so many others, stood by our chancellor. After all, Thorp may be the face of our University, but he’s not responsible for every blemish.

And that’s why I was particularly moved by the turnout for Thorp on Sept. 21, when the campus came together over the seemingly never-ending petition to show our support for the chancellor. Many made speeches — student body President Will Leimenstoll, Mayor Mark Kleinschmidt of Chapel Hill and housekeepers and grounds crew, among them.

Mayor Mark Chilton of Carrboro reminded us of the significance of rushing Polk Place. He said he remembered students pounding on the doors of South Building for a very different reason in the 1970s: to protest authority, not to ask it to stay.

Black Student Movement President Alexis Brown gave a rousing speech about the chancellor. She garnered more applause than anyone else, in large part because Thorp himself appeared behind her, with his wife, Patti, ever the consummate support, right by his side.

Thorp thanked us for his support. But he said he had made up his mind.

Then there was silence.

After a pause, the chancellor spoke again.

The people on the lawn breathed as one.

“Together we are the light on the hill,” he said.

So I have another answer for those news reporters. And it’s in the chancellor’s own words.

If you want another definition of the Carolina Way, I can’t think of one much better.