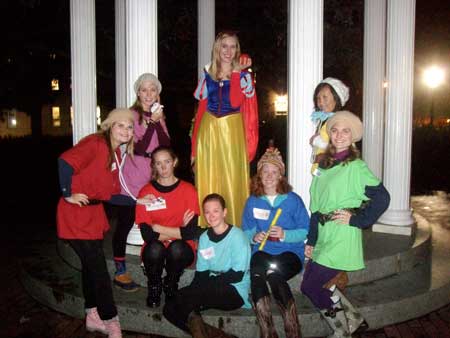 How a French Dance Company Brought Happily Ever After to UNC

I still remember the first time the Evil Queen from Snow White paid me a little nighttime visit. I was tossing and turning on my bed, flipping onto my side, then my back, then my side again, when suddenly I saw her. She had huge black eyes that took up half her face and a cluster of yellow and black teeth that stuck out like fangs when she smiled. Worst still, she had the longest, crooked-est nose I’d ever seen, on top of which were two huge red warts. When I saw her, I went rigid and sweat dripped down my spine.

And then, with one sallow, gnarled hand she reached beneath her cloak and produced a shiny red apple, which she offered to me. Her hand just inches from my face, I could see her long pointy nails, poised to stab.

I shook my head, but she insisted, pushing the apple even closer to my mouth. The polished skin felt cool against my lips. I sucked my lips into my teeth and shook my head harder. With tears falling fast, I wanted to cry out, but I couldn’t. Words struck hard at my dry throat. And then, with one final exertion, she shoved the apple hard against my lips, and sweet juice filled my mouth.

Luckily I woke up before anything else could happen.

In a way, it’s fitting that my first memorable nightmare included the Evil Queen, because as a young girl, I watched Snow White on repeat. I liked her far more than the other Disney princesses. She outranked Cinderella (a distant second) three to one.

And that’s why when a group of friends proposed dressing as Snow White and the Seven Dwarves for Halloween, I was (maybe a little too) keen on participating. At exactly six feet, my friend Ashlyn Berry became the shoe-in princess, and the rest of us her dwarves. We sang “Hi Ho, Hi Ho,” all the way from our dorms to Franklin Street. As Dopey, I wore my raggedy green shirt too loose and pinned my nametag on upside down — a fact a number of inebriated Franklin Streeters informed me of again and again and again. The same people. Every time.

Our progression down Franklin Street was slow, mainly because all the little girls (and some of the older ones) wanted pictures with our blonde Snow White (“and, oh, yeah, I guess the dwarves can get in, too”). As we traipsed past Sugarland, then The Carolina Coffee Shop, then Spanky’s and Yopo, our singing voices celebrated childhood magic.

And the magic lasted all evening. It was a magic tinged only by the thought that dreams of happily-ever-after only come true in fairytales. And that once we took off the work boots and scrubbed down our faces, brutal reality would come back full force.

But that same magic returned with the French dance company, Ballet Preljocaj’s, rendition of the fairytale at Memorial Hall April 4 and 5.  As soon as I heard about the modernized version, I made a beeline to the box office.

Before I arrived, I fully expected to stick out among a sea of little girls with long dresses and bows in their hair, swinging their legs, impatiently waiting for the curtain to open. But when I filed into the auditorium around 7:30 that Wednesday night, I was surprised by the audience’s demographic. Very few little girls were in attendance at all. Most were college age or older, and by most I mean almost all.

When the performance was over, I understood why. For the story focused as much on the queen of my childhood nightmare as on the princess of my longtime infatuation. I had come to see beautiful duets between Snow White and Prince Charming. But instead I found myself much more entranced by the scenes depicting the Evil Queen (in all her splendid, regal beauty) dancing with her reflection in the Magic Mirror.

One scene in particular kept me riveted to my seat, for it played out just like my long-ago dream, down to the force-fed apple. And while I had awoken before the poison took affect, this time around I watched, horror-struck as Snow White twitched and flicked before my eyes.

Death was certainly more realistic in Preljocaj’s version of the fairytale. Snow White still lay on a “coffin of glass and gold” (in this case, a sheet of glass propped against a simple pillar), but no beautiful candles with gently melting wax lit her porcelain face and no forest animals nor dwarves (or, in this case, monks) held round-the-clock vigil.

Instead, visibly shaken, Prince Charming almost crawled to Snow White’s lonely coffin and shed bitter, shoulder-shaking tears. (In the Disney version, he glides towards her, as if on a cloud.) And while this Prince Charming did kiss her, it was to no avail. Rather, in a fit of grief, he pried her from her coffin and forced her stiff body into a rigid duet.

Death is never so real until it is dancing. And I was glad that I’d awoken from my childhood nightmare before I’d been dragged into that duet.

Of course, the ballet does end happily ever after. (Just with not quite as many chirping birds or quite as bright a glowing sunset.) At the end of the couple’s dance, Prince Charming kissed Snow White once again (with un-Disneyesque passion), and she unsteadily, jerkily came back to life.

This was not the fairytale of my childhood. But as a college student, I appreciated it all the more for instilling in me the belief that dreams really can come true in real life.

For Snow White and Prince Charming really do live happily ever. Just not in a magical kingdom. But in this world. With you and me.