Dropping Baht at the Boxing Ring 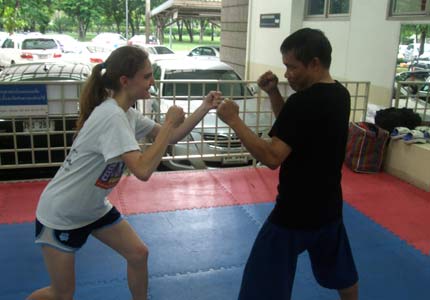 Dropping Baht at the Boxing Ring

As far as sports go, I’ve never been big on boxing. I’m a basketball fan all the way. Even football seems a bit brutal for me, so my small knowledge of Muay Thai boxing kept me changing the channel.

But a Wednesday night in July found me with several other Carolina Southeast Asia Summer Program participants cheering and shouting as muscular men in red and blue boxing shorts kicked and punched.

My simple description sadly conflates Thai boxing, however. For “kicking and punching” sounds as brutal as I’d originally judged the sport to be. But boxing is really a lot more like dancing than anything else, and few people would label dancing as “brutal.”

To be fair, I would probably never have come to this conclusion if I hadn’t taken a Thai boxing class recently. Our two-hour instruction involved demonstrations of many basic steps, among them: mat nueng (jab), mat wiang klap (spinning backfist), te tat (roundhouse kick), te khrueng khaeng khrueng khao (half-shin, half-knee kick), khayoep (step-up kick), kradot thip (jumping foot-thrust), swan-neck and blocking and avoidance techniques. The intricate names themselves speak to more than mere punching and kicking. While I watched our instructors demonstrate each of these steps time and time again, I elicited only titters with my efforts to emulate them. Just because I made contact with my partner didn’t mean that I’d punched or kicked him correctly; there was an artistry to the technique and the combination of steps that I never quite mastered. But I did gain a great appreciation for what I had the opportunity to watch.

From the get-go, our Thai boxing expedition was an adventure. My friend and SEAS participant Emory Wolf and I left the university campus in the late afternoon to catch a taxi and arrive shortly before the first match started at 6:30. Unfortunately, our first cab driver didn’t understand our poor pronunciation of “Ratchadamnoen Stadium,” nor did he understand our boxing mime attempts. And when it finally dawned on him that our jabbing fists were the result of feeble miming and not the result of a crazy American tick, he just laughed and charged us 40 baht for a drive around the neighborhood.

Our second cabbie was more willing to drive across town, and we still arrived earlier than expected, giving us enough time to order steaming dishes of Pad Thai off the street and eat them with the locals and several jumbo-sized rats.

The atmosphere outside the stadium was intoxicating. Several ticket salesmen accosted us with brochures describing the matches, circling the “big matches” of the evening and trying to convince us to spring for ringside seating (costing 2000 baht, or about $63 U.S.) as opposed to the 1000 baht (or about $31 U.S. tickets), which were “standing room only.” Luckily, a few friends had gone to the matches Monday night and told us that the ticket sales were a gimmick.

Sure enough, our cheaper tickets (which we bought 30 minutes into the event) left us with plenty of seats, and while we were surrounded by excited fans betting thousands of baht at a time on individual punches and entire matches, we found the rest of our fellow tourists sitting in a much tamer ringside environment, with only a slightly better view of the matches.

But I didn’t go to the stadium to watch boxing. I was much more interested in the culture surrounding the fights. I went to the matches with a group of four other friends — all girls. We made up more than 50 percent of the female population at the matches. The other two or three women in the stadium were confused, discontented girlfriends, who were obviously still in the honeymoon stage of the relationship and afraid of dragging their partners off to shopping malls to drop the big baht.

Men laughed and pointed at us. My friends, dressed in skirts and flowing Aladdin pants, were a bit over-dressed for the average shorts and T-shirt-clad audience member. We stood at the wire meshing, which separated 1000 baht ticket buyers from the higher class, and we cheered on blue shorts or red shorts (depending on the match) as well as the rest of them.

The biggest benefit to watching an all-male sport? Short bathroom lines. I’ve never been to a sporting event in which the men had to stand in line, while the women could walk right in. But I had my choice of stalls and could have probably hung out in the bathroom uninterrupted until the match this coming Thursday.

But our long hair and inability to gamble made us stick out, and on more than one occasion we were escorted to the “foreigners” section, where the atmosphere was tamer (and a bit boring). Still, like flies to honey, we always returned to sit among locals, waving their arms, placing bets and flashing 1000 baht bills at one another. Sitting with this knowledgeable crowd came with more than entertainment benefits. My complete lack of understanding for the game meant that it took me a few rounds to figure out the scoreboard. Did the red and green numbers count hits? Wins? No, after much pointing and miming with the knowledgeable man sitting beside me, I learned that it actually marked the match number and the number of rounds that had expired within each match.

Each match included five rounds, with the first one or two serving as a warm-up for both boxers and betters. As the fighters tested the agility of their opponents, the betters judged their abilities and likelihood to win them big baht. By round three, our companions were shouting, flagging down betting officials and furiously scribbling on printed scorecards. After watching the betting dynamic for a few rounds, I was struck that no one seemed to win or lose much; they just exchanged bills between matches. You win some and you lose some.

Except for one man. With a wallet thick with 1000s, he was the guru of betting. Sure, he lost a few big bills, but it didn’t seem to bother him. He’d shrug and laugh, buy some pineapple off the lady selling freshly cut fruit from a basket, bet higher and get his bills (and a few more) right back.

We didn’t make it through the full four hours of matches. With our last day of classes the following morning and needing to account for finding a taxi willing to take us back to campus (and not treat us to a tour of the stadium grounds), we left around 9 p.m., just as the matches really started to get heated. (Those warm-up rounds included kicks to the head and neck-to-neck struggles). So, we bid farewell (and good luck) to our gambling companions and then cooled off with 7/11 ice cream before heading back to the university.

I can say with confidence that I will never be a Thai boxer. I may not ever even try the sport again. And I don’t see myself becoming one of those people who goes to the ring once, twice, three times a week. But the next time Muay Thai boxing is playing on TV, I won’t change the channel so quickly. I won’t be so interested in the matches themselves. I’ll be waiting for the cameramen to scan the audience members, placing bets and munching on watermelon and papaya. Maybe I’ll even see the man with the thick wallet, laughing off losses and betting big baht at the boxing ring.